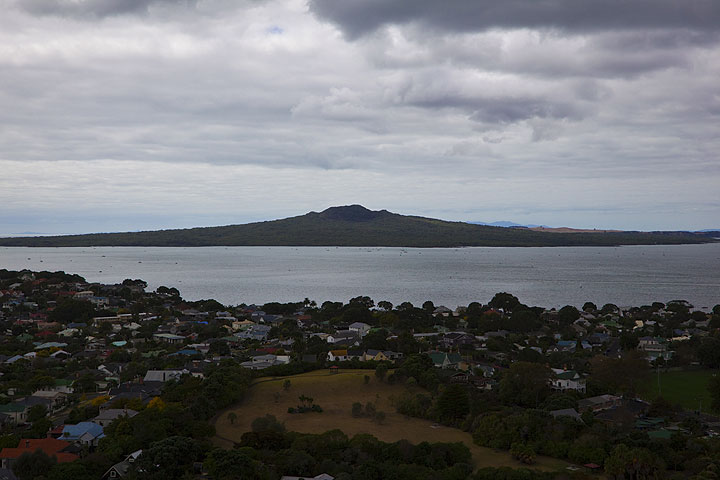 Rangitoto Island, part of the Auckland volcanic field, formed about 600 years ago during the largest eruption of the Auckland Field. View is from top of Mt Eden - an old crater close to the center of Auckland.

The Auckland Volcanic Field directly underlies the largest city of New Zealand and consists of more than 50 basaltic cones, maars and lava flows. It covers an elliptical area of 29 (N-S) x 16.5 (E-W) km and has been active for the past 140,000 years, during which is has produced about 7 cubic km of mostly basaltic lava. The last eruption was as recently as about 600 years ago when the cone of Rangitoto Island was formed. About 20 eruptions have occurred during the past 20,000 years, suggesting an average recurrence interval of approx. 1000 years.
Since eruptions could (and likely will) occur again in the future, it is a considerable hazard to Auckland city, especially since the time between first signs (seismic swarms, ground movements, gas emissions) to an eruption could be relatively short (weeks to months).

The Auckland volcanic field has dominantly produced intraplate alkali basaltic to basantic rocks forming the northernmost of a group of Quaternary volcanic fields of the Auckland Intraplate Province.
Eruptive activity in the past 20,000 years
Many of the eruptions were phreatomagmatic (water-magma contact) and formed maars, while others formed cones where magma was isolated from ground water. Eruptions are believed to have lasted from 10-100 years.
Of the 19 eruptions known to have occurred within the past 20,000 years, only one eruptive center is known to have been active during the Holocene (Smith and Allen, 1993). The Rangitoto eruption, about 600 years ago, was the largest of the Auckland volcanic field and accounts for about half of the total volume of the volcanic field. It created the 6-km-wide Rangitoto Island, which consists of multiple scoria cones up to 260-m high that cap a low shield volcano with a broad apron of lava flows. The longest lava flow from Rangitoto reaches 10 km length and has a maximum thickness of 60 m.
---
Sources:
- Smithsonian / GVP volcano information
- Smith I E M, Allen S R, (1993) "Volcanic hazards at the Auckland Volcanic Field" New Zeal Ministry Civil Defense, Volc Hazards Inf Ser, 5: 1-34 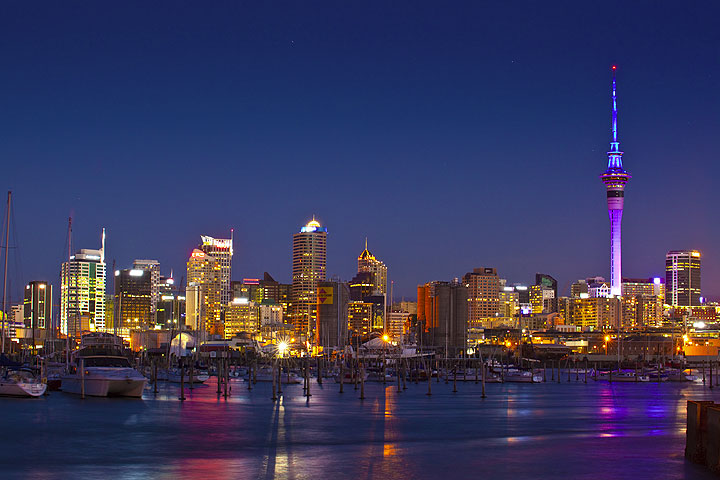 The skyline of Auckland and its yacht harbour in the evening (Photo: Tom Pfeiffer) 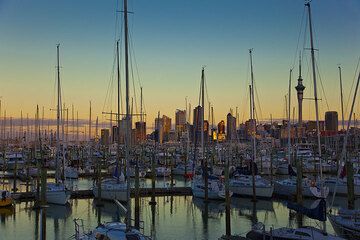 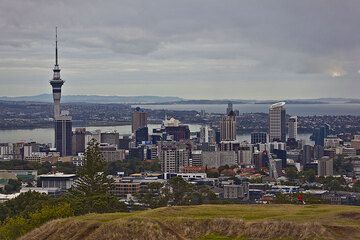 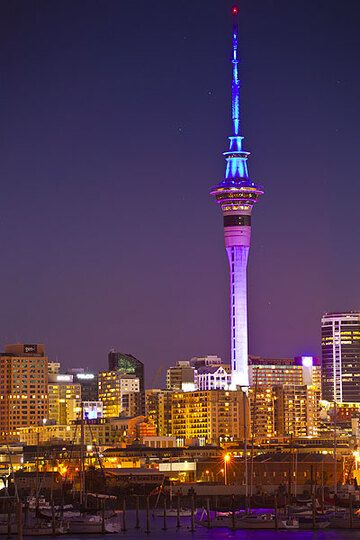 Eruption from close
On 17 Oct, explosions were particularly violent at Anak Krakatau. We show a series of images of a spectacular explosion captured from close range by boat.
VAAC

Photos from Kamchatka
Kamchatka in Russia's far east is one of world's remotest regions and has an almost unparalleled density of active volcanoes. Look at photos taken during our expeditions from this wonderful corner of the world!
Volcano Videos

Read user reports of people who felt an earthquake in the last week
Get the ad-free version!
Why is there advertising on this site?
Support us - Help us upgrade our services!
We truly love working to bring you the latest volcano and earthquake data from around the world. Maintaining our website and our free apps does require, however, considerable time and resources.
We need financing to increase hard- and software capacity as well as support our editor team. We're aiming to achieve uninterrupted service wherever an earthquake or volcano eruption unfolds, and your donations can make it happen! Every donation will be highly appreciated. If you find the information useful and would like to support our team in integrating further features, write great content, and in upgrading our soft- and hardware, please make a donation (PayPal or Online credit card payment).