Bam volcano is one of the most active volcanoes in Papua New Guinea. A mostly submerged stratovolcano forms the small 2.4 km x 1.6 km oval shaped Bam Island. Bam volcano belongs to the Bismarck volcanic arc north of New Guinea. Bam is the SE-most of the Schouten Islands and ocated 40 km NNE of the mouth of the Sepik River.
Bam volcano contains 2 peaks, the NW peak being the active summit, and the SE peak an older cone and slightly lower.
The oval 300 m diameter and 180 m deep summit crater of Bam is free of vegetation due to frequent and recent volcanic activity. The crater has steep walls with exposed lava flows dipping inwards.
The historic eruptions, recorded since 1872, were small to moderate vulcanian eruptions from the summit crater. Hot springs are found on the island.

A NE-trending landslide scarp extends across the upper part of the andesitic volcano from the SW coast, and a large submarine debris-avalanche deposits lies to the south and SW. The younger summit cone partially buries the eastern side of the collapse scarp. A recent lava platform on the north flank supports the small island's only villages.
According to John Seach, "islanders note a seasonal pattern of eruptions, with ash emissions occurring in the doldrums" (http://www.volcanolive.com/bam.html), but no source of this information is given. 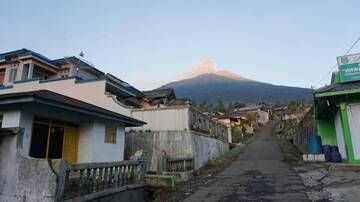 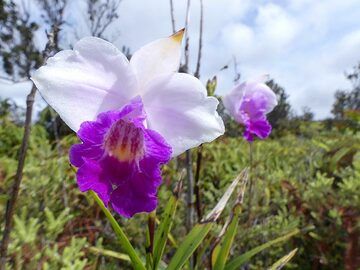 Day 3: Bamboo orchid is one of the many non-native tropical plants that were introduced on Hawaii where they thrive (Photo: Ingrid Smet) 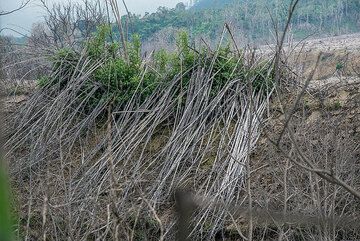 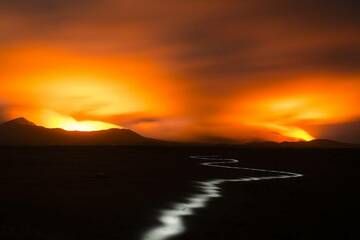 1 August 2011 earthquake
A very strong shallow magnitude 6.8 earthquake occurred 6 km from Bam (Biem) volcano close to the coast of Papua New Guinea on Monday 1 August 2011. A tsunami warning was issued and later cancelled. The island has a population of approx. 2,000 indigenous people, most of which live in wooden houses built on stilts. According to Earthquake report.com, no major damage occurred fortunately.


1981 hydrothermal activity
During aerial inspections 6 and 19 March, a 1-km-long zone of orange sea discoloration was noted at the S shore of Bam Island. (Smithsonian 03/1981 SEAN bulletin 06:03)


1924 eruption
Explosions from the summit crater caused damage to farmland.


1907 eruption
According to volcanolive.com (no source given), explosive eruptions produced ash columns reaching over 2500 m.


1872 eruption
The first recorded eruption of Bam occurred around 1872. Large amounts of ash were ejected from the summit crater. There was damage to property and people were evacuated.
(Smithsonian / GVP)
Latest satellite images Earthquakes near volcanoes
Earthquakes often precede volcanic eruptions. Find out where the latest earthquakes in the vicinity of volcanoes have occurred.
Hawai'i

Hawai'i and Kilauea volcano photos
Lava flows, lava lakes, eruptions and aerial images from Kilauea on the Big Island of Hawai'i throughout the years.
Volcanoes outside Earth

Volcanoes in the Solar System
The Earth is not the only place with volcanic activity. Active volcanism also occurs at at least 3 other bodies in our Solar System.
Earthquakes 2016

Top 20 quakes in 2016
Several magnitude 7 quakes occurred in 2016 (but none above M8): Papua New Guinea, NZ, Ecuador, Solomon Islands, Sumatra, Chile, Alaska and others - nearly all major earthquakes were located near active subduction zones.
See the top 20 list of largest quakes in 2016 with this map.
Peru
5-16 June 2021

Volcanoes of Peru
Our 12-days itinerary includes some of the most beautiful and interesting sights around Arequipa from "volcanic point of view": La Laguna de Salinas, El Misti, Ubinas, Picchu Picchu, Andagua Valley, Colca Canyon, and currently erupting Sabancaya volcano.
Get the ad-free version!
Why is there advertising on this site?
Support us - Help us upgrade our services!
We truly love working to bring you the latest volcano and earthquake data from around the world. Maintaining our website and our free apps does require, however, considerable time and resources.
We need financing to increase hard- and software capacity as well as support our editor team. We're aiming to achieve uninterrupted service wherever an earthquake or volcano eruption unfolds, and your donations can make it happen! Every donation will be highly appreciated. If you find the information useful and would like to support our team in integrating further features, write great content, and in upgrading our soft- and hardware, please make a donation (PayPal or Online credit card payment).