The volcano on Barren Island is still very active as news reports. The height of the cone has increased by about 50 metres during the past nine months since its eruption started last May. A team of scientists from India landed on the island to study the recent eruption. Lava flows have covered the entire north-western face of the island destroying the lone landing site. ->More on Barren Island

Barren Island, a possession of India in the Andaman Sea about 135 km NE of Port Blair in the Andaman Islands, is the only historically active volcano along the N-S-trending volcanic arc extending between Sumatra and Burma (Myanmar).  The 354-m-high island is the emergent summit of a volcano that rises from a depth of about 2250 m.  The small, uninhabited 3-km-wide island contains a roughly 2-km-wide caldera with walls 250-350 m high.  The caldera, which is open to the sea on the west, was created during a major explosive eruption in the late Pleistocene that produced pyroclastic-flow and -surge deposits.  The morphology of a fresh pyroclastic cone that was constructed in the center of the caldera has varied during the course of historical eruptions.  Lava flows fill much of the caldera floor and have reached the sea along the western coast during eruptions in the 19th century and more recently in 1991 and 1995.
---
Source: GVP, Smithsonian Institution 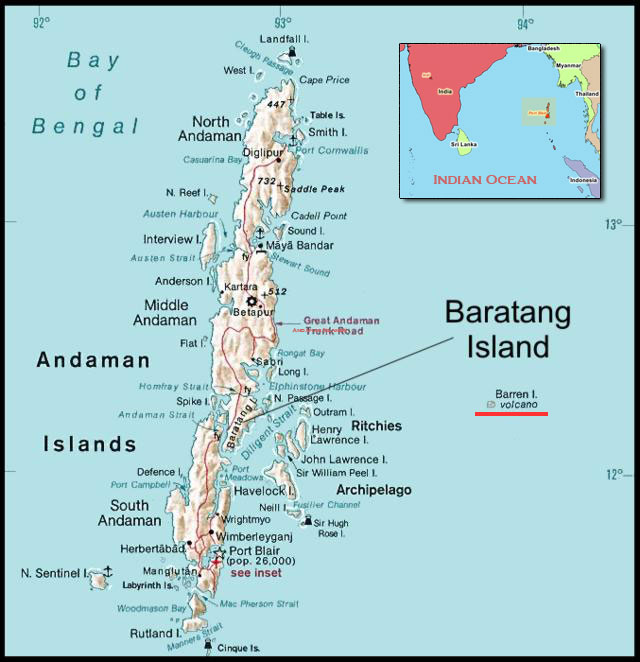 Volcanoes & Earthquakes
Our popular app is now also available for iPhone and iPad! Get the latest volcano news and earthquakes world-wide - it's free!
Germany

Photos from Germany
Germany has a large number of volcanoes - most of them extinct, but the Eifel volcanic field is still potentially active.
Bromo eruption 2010-11

Photos from Mt Bromo in eruption during 2010-11
The most recent eruption of famous Mt Bromo volcano in East Java, Indonesia.
Geology dictionary

Glossary of geologic terms
A growing list of often illustrated explanations and definitions of geological terms and keywords, with focus on volcanology and seismology.
Santorini 1600 BC