Wed, 23 Dec 2015, 06:00
06:00 AM | BY: VN
PHIVOLCS reported that at 1457 on 23 December the seismic network at Kanlaon detected an explosion. The event was not visually observed due to dense weather clouds around the summit area but rumbling was heard in nearby barangays including Cabagnaan, La Castellana (16 km SW), and Ara-al and Yubo, La Carlota City (14 km W). Minor amounts of ash fell in Ara-al, Haguimit, and La Granja, La Carlota City, and a sulfur odor was noted in barangay Tres Elis, La Castellana.
An explosive event detected by the seismic network at 2109 on 24 December was again not visually observed. Trace amounts of ash fell in Ara-al, Haguimit, and La Granja, and a sulfur odor was reported in Tres Elis. White steam plumes rose 100 m above the crater and drifted SW on 26 December.
A five-minute long ash event that began at 1329 on 27 December was accompanied by rumbling heard in a few local barangays. An eruption plume, viewed from the SE flank, rose 1 km above the crater, and may have risen as high as 4.5 km based on pilot observations. Minor ashfall was noted in Ara-al, Yubo, and La Granja, Cabagnaan, Sag-ang (La Castellana), barangay Miranda, Hinigaran (Negros Occidental), Municipality of Pontevedra (Negros Occidental), and reached as far as Nueva Valencia, Guimaras (58 km WNW).
The Alert Level remained at 1 (on a scale of 0-5).

PHIVOLCS reported that at 2138 on 15 December a low-frequency earthquake at Kanlaon that lasted 45-47 seconds possibly corresponded to an ash emission, though inclement weather prevented visual observations of the crater. Rumbling was heard in neighborhoods on the SE flank. On 17 December white steam plumes rose 50 m above the crater. ... Read all
Fri, 11 Dec 2015, 16:46 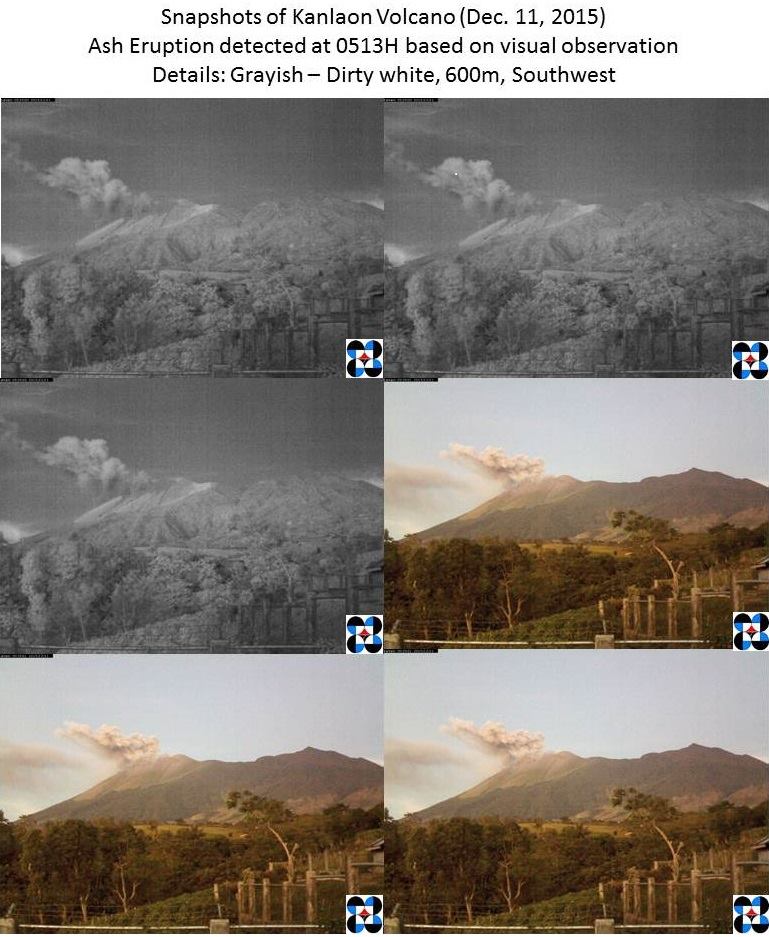 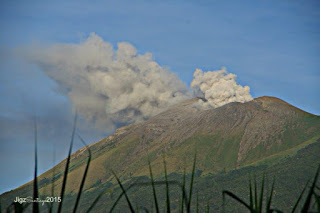 PHIVOLCS raised the alert level of the volcano following an increase in activity. Starting from 21:55 local time on 24 Nov, a series of phreatic explosions occurred from the summit crater, producing ash plumes that rose up to approx. 1 km. ... Read all
Wed, 18 Nov 2015, 06:00

PHIVOLCS reported that the seismic network for Kanlaon detected an explosion-type signal beginning at 0930 on 23 November, culminating with an 8-minute-long steam explosion. Observers reported that a white plume rose 1-1.5 km above the crater and drifted SW, and rumbling was heard in local areas. Only four volcanic earthquakes had been recorded during the previous week, but after the explosion, the network detected volcanic tremor that lasted for five hours. ... Read all
Show more
Tue, 21 Feb 2012, 19:54

Based on a pilot observation, the Tokyo VAAC reported that on 15 May an ash plume from Kanlaon rose to an altitude of 2.4 km (8,000 ft) a.s.l. and drifted W. Ash was not identified in satellite imagery. [PHIVOLCS later confirmed that the plume originated from a fire and not an eruption. ... Read all
Show more
Tue, 1 Sep 2009, 06:55

Canlaon volcano might be preparing for a new eruption. PHILVOLCS observed a remarkable rise in its seismic activity. ... Read all
Wed, 26 Aug 2009, 06:00

Pearl of the Aegean
Santorini is one of the most beautiful islands in the world, famous for its breathtaking sea-filled caldera and picturesque villages. Discover its fascinating natural and cultural history on a relaxed walking study tour with us.
World Volcano Tour

Round-the-world volcano tour
Have you ever dreamt of travelling around the world? VolcanoDiscovery makes this dream come true.
Travel news

Photos from Kamchatka
Kamchatka in Russia's far east is one of world's remotest regions and has an almost unparalleled density of active volcanoes. Look at photos taken during our expeditions from this wonderful corner of the world!
Merapi

Merapi volcano photos
One of the most active and most dangerous volcanoes of Indonesia: Merapi meaning "the one who makes fire", is a feared but also venerated holy mountain looming over the city of Yogyakarta, capital of Central Java.
Get the ad-free version!
Why is there advertising on this site?