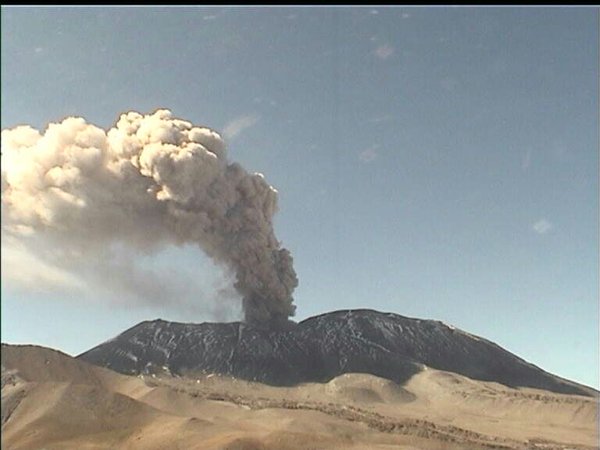 Read all
Lascar volcano (Chile) - Smithsonian / USGS Weekly Volcanic Activity Report for 23 August-29 August 2006 (Continuing Activity)
Wed, 23 Aug 2006, 06:00
Several small phreatic explosions occurred at Lascar during May, July, and August. The explosions were separated in time by up to several weeks. The last observed explosion, lasting for about five minutes on 14 August, produced a plume that reached a height of 450 m above the crater (19,800 ft a.s.l.) and dispersed ESE. Read all
Lascar volcano (Chile), activity report: phreatic eruptions on 18, 19, and 20 April 2006
Wed, 26 Apr 2006, 13:27 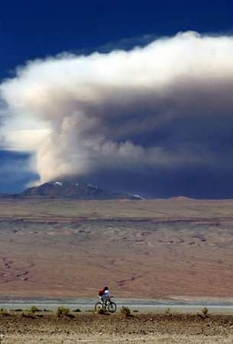 Read all
to top
Lascar volcano (Chile) - Smithsonian / USGS Weekly Volcanic Activity Report for 4 May-10 May 2005 (New Activity / Unrest)
Wed, 4 May 2005, 06:00
The Buenos Aires VAAC reported an eruption from Lascar seen on satellite imagery early on 4 May that sent an ash plume into the 4.5-10.6 km a.s.l. range (15,000-35,000 feet), where it was moving to the SE. Read all
Lascar volcano (Chile) - Smithsonian / USGS Weekly Volcanic Activity Report for 31 December-6 January 2004 (Continuing Activity)
Wed, 31 Dec 2003, 06:00
According the Oficina Nacional de Emergencia Ministerio del Interior (ONEMI), on 9 December small amounts of fine ash were emitted from fumaroles at Lascar. The following day activity was at "normal" levels, with only gas and steam emitted. No increased seismicity was recorded. Read all
First visit to our site? If you havn't done it yet, download the Volcanoes & Earthquakes app to get one of the fastest volcano news online:
Android | IOS

Land of Theseus
A relaxed walking and study tour to one of Greece's hidden treasures and also one of the least known volcanically active areas in Europe.
Milos
27 Sep-2 Oct 2020

Island of Venus
Milos Island in Greece is one of the most beautiful and photogenic islands of the Mediterranean. Its boasts breathtaking scenery of colorful volcanic rocks, some of the finest beaches of the country, a rich archeological heritage, great hospitality and delicious local cuisine. Come join us to explore this magical island on a 6-days geological tour!
Yellowstone quakes