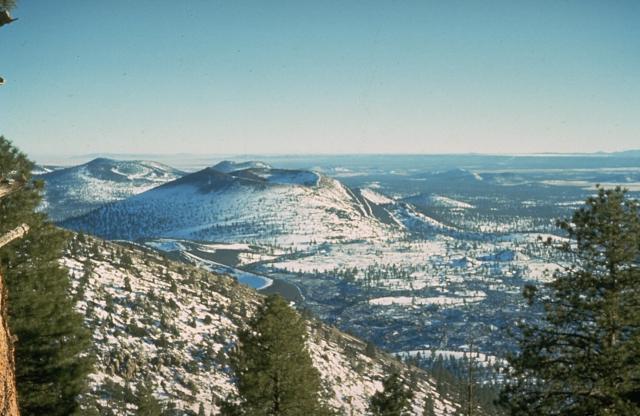 Snow-mantled Sunset Crater (left-center), seen from O'Leary Peak to the NW, is the youngest volcanic feature of the San Francisco Mountain volcanic field, which covers a vast area of northern Arizona between Flagstaff and the Grand Canyon. The Sunset Crater eruption began about 1100 AD from a chain of cinder cones and vents trending NW-SE, the largest of which is Sunset Crater. Three lava flows were erupted, the longest of which traveled 11 km to the NE. Photo by Ed Wolfe, 1973 (U.S. Geological Survey)
Sunset Crater in northern Arizona is one of the youngest volcanoes in the USA. It is named for its brilliantly colored scoria deposits on the cone and only one of more than 550 vents of the vast San Francisco volcanic field.
The last eruption took place sometime between abo... [mehr]

(vulkanische Gebiet 1555 m / 5,102 ft)
The Uinkaret volcanic field is located at the north rim of the Grand Canyon in Arizona. It contains cinder cones that have produced lava flows that repeatedly cascaded into the Grand Canyon, forming temporary lava dams up to 200 m high. In one of these lava flows, known as the Li... [mehr]

Recent rumors about steaming from Sunset crater, and speculation of a possible reawakening of the volcano are most likely based on false or fake information. The volcano, one of Arziona's youngest, last erupted about 1000 years ago, but shows currently no signs of reawakening. Read all
App herunterladen

Colima volcano photos
This beautiful stratovolcano in western Mexico is one of the most active volcanoes on the American continents. It is known for its often spectacular explosions and sometimes glowing avalanches.
Volcano Webcams