Eruption at Holuhraun officially at an end 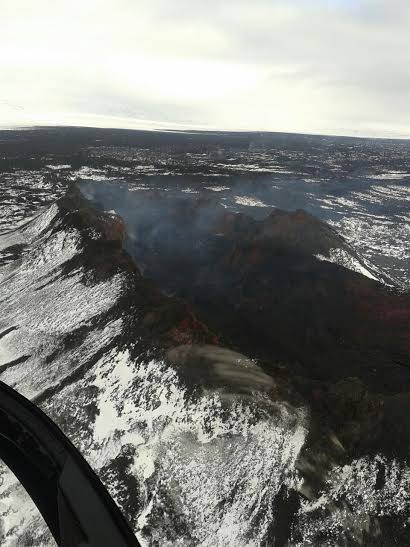 On the 27th of February Helo - Helicopter Service of Iceland reported that the flame is now out in Holuhraun. 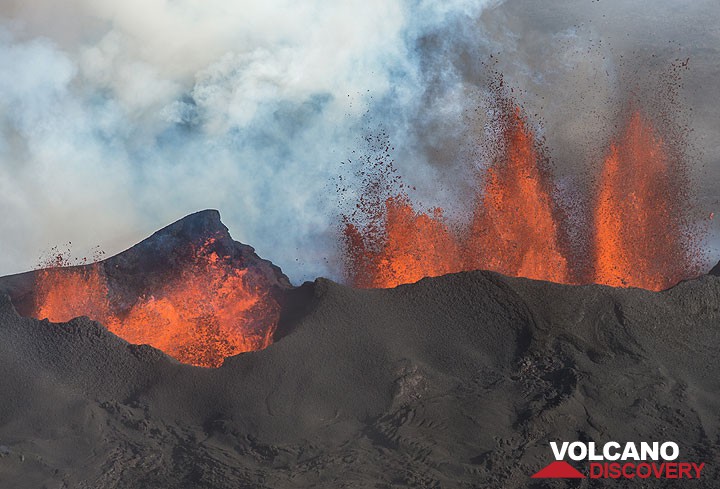 The fissure was still very active and violently erupting tall lava fountains from a number of vents when volcanologist Dr Tom Pfeiffer flew over the site on the 12the of September 2014. 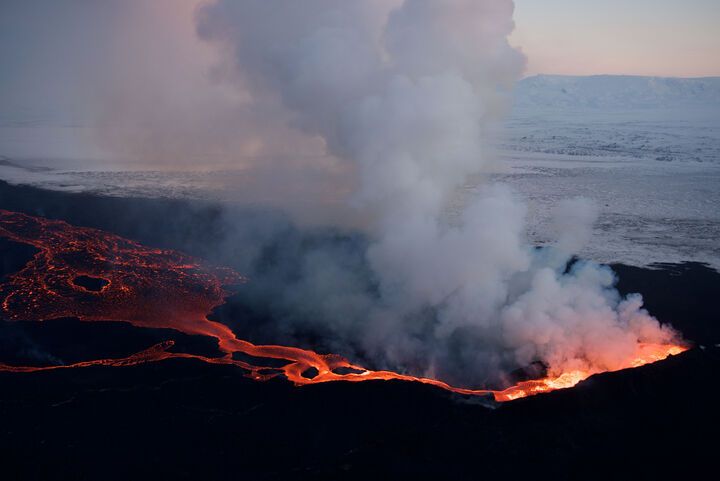 The eruption site at Holuhraun and the immensely long lava flow and active lava field on the 26th of October 2014. Photograph taken by Ólafur Sigurjónsson. 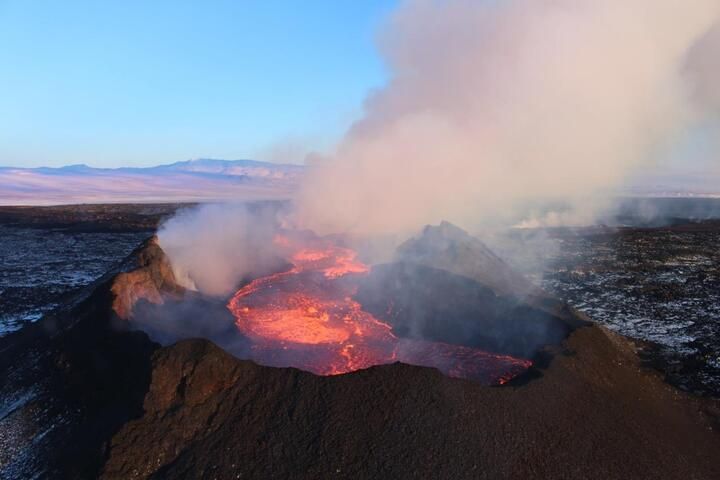 By the winter of 2014, the exposive activity had subdued and changed into effusive activity of lava flowing from a large active lava lake. Photograph from the Institure of Earth Sciences at the University of Iceland. 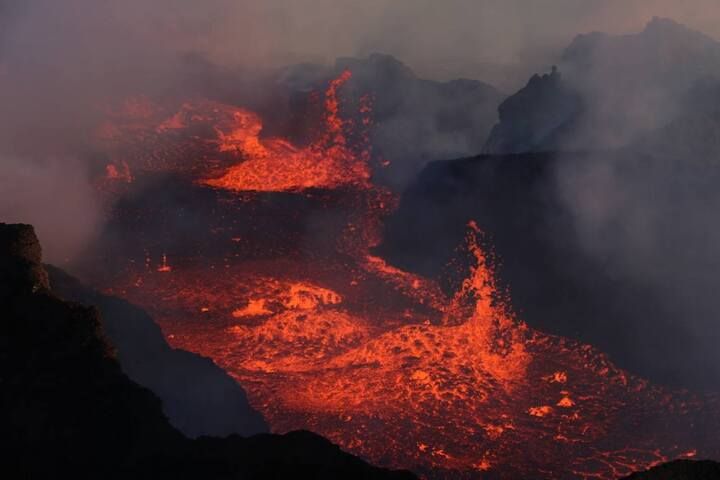 This lava lake continued to be very active: continuous degassing gave rise to bubbles and explosions, making the lava lake look as it is boiling. Photograph from the Institure of Earth Sciences at the University of Iceland. 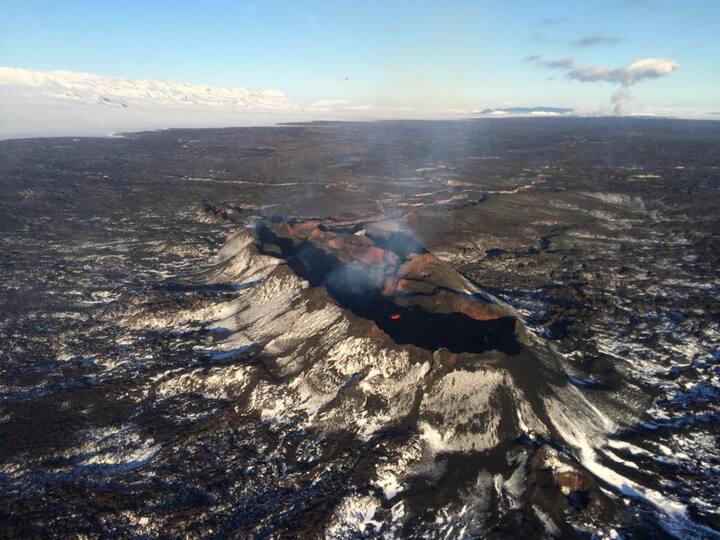 For a TV documentary, Biwak-TV undertook a flight with helicoptercompany Norðurflug on the 22nd of February and reported that there was nearly no more active lava to be seen at the Hulhraun fissure eruption site apart from some lava spattering from a single vent. 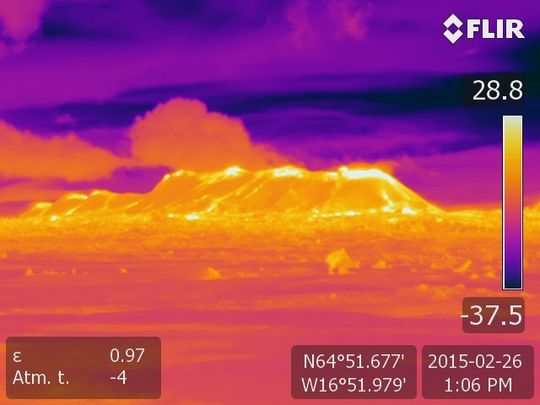 A FLIR thermal image taken on 26 February 2015 revealed that some thermal convection could still be detected at the eruptive site but that this heat is not great compared to earlier images. 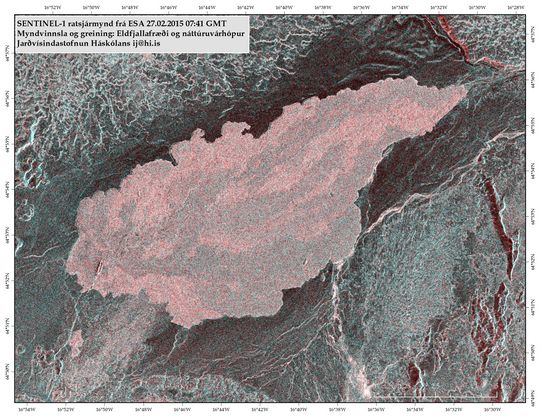 A SENTINEL-1 radar image from ESA 27.02.2015 showed that there had not been an increase in the extent of the Holuhraun lava field since the middle of February.
At noon of the 28th of February, the Scientific Advisory Board for Iceland´s recent volcanic activity officially declared that the eruption at Holuhraun has come to an end.
A first mention of a visible reduction in the amount of lava emitted over the previous 2 weeks was reported on the 6th of February - but seismic activity in and around Bárðarbunga continued to be strong.
The Icelandic Met Office reported on the 17th February that despite the eruption at Holuhraun continued to go on, it was clearly diminishing, and no earthquake over M5.0 had been detected in the Bárðarbunga area since the 8th of January.
On the 20th of February their report mentioned that the still ongoing eruption had diminished substantially over the last few weeks and that visual activity in the crater had decreased so much that for the first time the lava field was hardly increasing in size. By then there was also a clear diminish in the region´s seismic activity.
On the 24th of February, information on the suplhur dioxide emissions in populated areas revealed that there had not been any high values of SO2 detected on the twenty or so automatic gas measuring stations - and no surpassing of the health limit of 350 µg/m³ since the 5 th of February. But it was also clearly stated that this of course does not apply to the wilderness closer to Holuhraun where sulphur dioxide is present at dangerous levels. A helicopter surveillance flight on the 27th of February finally showed that there was no more glow at the eruptive site, suggesting that the magma flow is over, i.e. that new and hot magma is no longer transported to the surface to erupt as lava through the vents in Holuhraun. Volcanic gas is, however, still being released from both the eruptive site and the lava field.

The Holuhraun eruption began on the 31st of August 2014, after 2 weeks of earthquakes in and around Bárðarbunga volcano which were followed all over the world thanks to the internet and represent the first time ever that a magmatic intrusion in the upper crust was closely observed.
The fissure eruption had a large number of active vents that ejected large amounts of lava for a prolonged time, but even after the initial onset of the eruption a few of these vents remained very active - eventually transforming from explosive to effusive volcanic activity but continuing to feed the huge lava field by flows from the active lava lake.
This 6 months long continuous eruption quickly became one of the very rare prolonged fissure eruptions Iceland has experienced in the past 1000 years. It also pulverized records of volume of ejected magma, length of the resulting lava flow and duration of the eruption from volcanic eruptions in the last few centuries: about 1.5 km³ of lava has been erupted and the resulting lava field has a surface area of about 86km² - making it the largest Icelandic eruption since Laki´s activity in 1783-1785.

The Laki fissure eruption itself continued for 8 months, erupted ca. 14 km³ of basaltic lava and emitted poisonous volcanic gasses (hydrofluoric acid and sulphur dioxide) that killed 50% of the livestock on Iceland. As a result, about 25% of the Icelandic human population starved to death. But the deadly results from this eruption did not stop there: in the aftermath of the eruption temperatures plunged globally due to the large amounts of sulphur dioxide that was injected in the northern hemisphere. It is estimated that the famine resulting from this climate change killed about 6 million people worldwide - making one of the most deadly volcanic eruptions of all times.

Luckily, the recent Holuhraun fissure eruption has not been so poisonous, although it did also emit a lot of sulphur dioxide in the surrounding atmosphere, which at times drifted to other parts of northern Europe. The Icelandic Civil Protection will continue to closely monitor the emission of volcanic gasses and issue warnings / alerts if the combination of degassing and the weather are forecasted to result in dangerous high levels of sulphur dioxide in certain parts of Iceland.
Other lava eruptions have taught that a lava field continues to emit gas for a long time after the end of the eruption itself. Without the thermal rise from an open vent, the volcanic gases will furthermore tend to follow pathways under the ground to find new areas to escape into the atmosphere. Therefore, even higher values of more polluting gas may be expected now than in recent weeks.

The Civil Protection thus remains to operate in the alert phase and there is no change with regard to the restricted area north of Vatnajökull, but the aviation colour code for Bárðarbunga has been downgraded from orange to yellow.

"Thank you very much for the formidable trip!"
Read what our clients have said about us and our tours!
Methana 28 Mar
- 4 Apr 2020