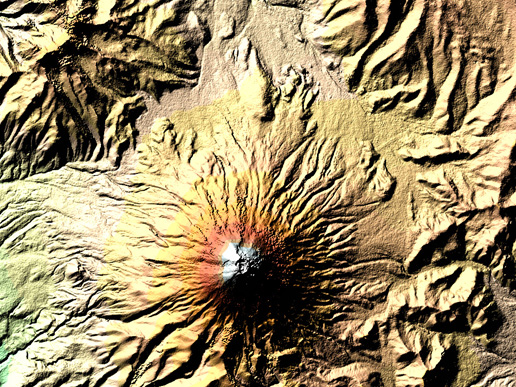 
1880 vulcanian eruption
One of the largest eruptions of Cotopaxi in historic times began on 3 July 1880. A powerful explosion sent an ash column of 20,000 ft (ca. 6 km) height above the crater in less than a minute.
The British explorer Edward Whymper was climbing Chimborazo at the time of the eruption and reported extremely vivid and strange light and color effects when the large ash plume drifted over him: "... several hours passed before the ash commenced to intervene between the sun and ourselves; and, when it did so, we witnessed effects which simply amazed us. We saw a green sun..." (click to read more) ...mehr


The Chillos Valley Lahar 4500 years ago
The Chillos Valley Lahar from Cotopaxi volcano's north and NE slopes is the largest known debris flow in the northern Andes during the Holocene (11,700 years ago to present).
It descended river systems and flowed 326 km north–northwest to the Pacific Ocean and more than 130 km east into the Amazon basin. The massive avalanche occurred around 4500 years ago.
Letzte Satellitenbilder Volcanoes of Java
Climb some of its most interesting and active volcanoes of Java: Papandayan and Galunggung, Merapi in Central Java, Kelud, Semeru, Bromo, the Tengger caldera, and Ijen.
Plate Tectonics

Introduction to Plate Tectonics
The Earth's upper, rigid layer is broken into several plates which are in constant motion to one another. Most earthquakes and volcanoes occur as result of these plate boundaries.
Warum gibt es Werbung auf dieser Seite?