In short, the intensity of a quake is its effect on the ground at a given point.
While the perhaps more familiar parameter of magnitude is a measure of the energy that an earthquake releases, the "intensity" of a quake is a measure of the ground shaking severity at a given point. It is thus depending primarily on the earthquake's magnitude and distance from where the quake occurred inside the earth (hypocenter), i.e. a combination of distance from its epicenter and depth.
The larger a quake, the closer to the epicenter and the shallower the quake, the more shaking is noticeable on the ground.
Intensity of earthquakes at given locations is thus a much more appropriate value to asses potential damage etc . It is most commonly measured on the so-called Modified Mercalli Intensity scale, or short as MMI given in Roman numbers from I to X (1-10), where I describes the lowest possible shaking perceived by only the most sensitive persons under favorable conditions, while intensities of IX and X are catastrophic ground movments that would level (nearly) every structure.
The MMI is based on an original scale presented and used by Italian seismologist Giuseppe Mercalli's in 1902, and adapted in 1931 by the American seismologists Harry Wood and Frank Neumann. 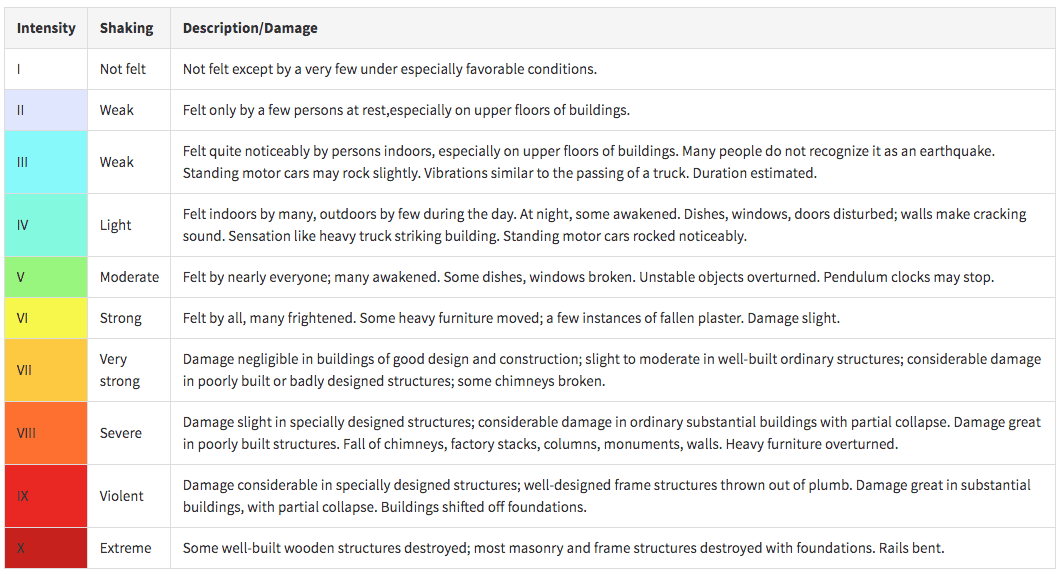