Etna volcano eruptions: paroxysms from the New SE crater in 2011-12 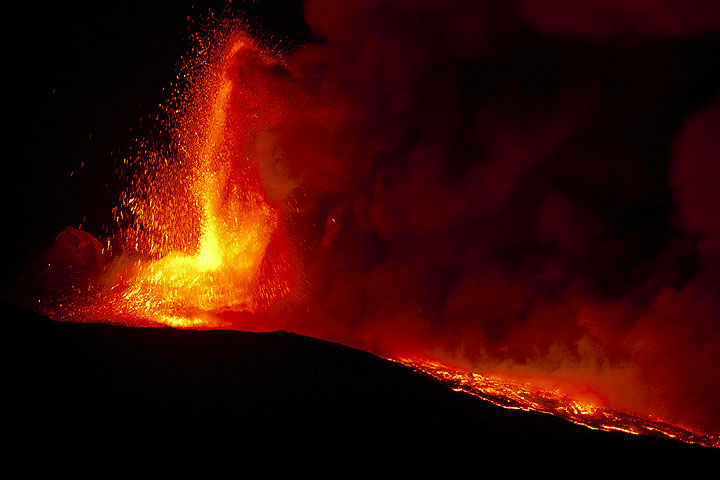 Lava fountains during the New SE crater paroxysm on 19 July 2011
In early January 2011, Etna started a series of spectacular eruptions from the pit crater at the eastern foot of the SE crater with eruptions every 5-about 50 days. Each of these so-called paroxysms consisted of increasing strombolian explosions culminating in a brief phase of tall lava fountains lasting between 30 minutes and a few hours, generating tall ash plumes and producing lava flows into the Valle del Bove. As of early 2012, the series is still continuing and there have been a total of 19 paroxysms until now (2 Feb). As a result of the eruptions, the former pit crater has dramatically increased insize and become a new member of the summit craters. It is now only little lower than the SE crater itself, and commonly called the New SE crater.

Solar Eclipse & volcano tour
A total solar eclipse will occur on 14 Dec 2020 and pass over southern Chile and Argentina. Chile's most active volcano Villarrica is located exactly on the center line where the eclipse will be best to observe.
We offer you the unique chance to combine the eclipse with a tour to one the world's most beautiful volcanic areas - the Lake District in Chile.
Krakatoa explosion

Eruption from close
On 17 Oct, explosions were particularly violent at Anak Krakatau. We show a series of images of a spectacular explosion captured from close range by boat.
Dallol

Dallol hot springs
One of the most bizarre landscapes on earth: Dallol is a vast and very active hydrothermal field creating a colorful array of hot springs, small geysers, salt towers, colorful lakes and ponds in the middle of the deepest part of the Danakil desert and the Karum salt lake.
Lassen Peak

Current activity of Bardarbunga volcano, Iceland
An intense seismic crisis started at Bárdarbunga volcano on 16 August 2014 and is continuing at the time of writing (23 Aug). It may or may not lead to a volcanic eruption, possibly under the Vatnajökull ice cap.
Follow updates as news come in!
Warum gibt es Werbung auf dieser Seite?