Hayes volcano, named after Hayes Glacier, is a stratovolcano which was only discovered in 1975. It is located in a remote, mostly uninhabited and inaccessible part in the northern Tordrillo Mountains of the north-central Cook Inlet region about 135 km NW of Anchorage.
The nearest settlements are the small towns of Tyonek and Skwentna in the lower Susitna valley.
Hayes is the easternmost of the volcanoes of the Aleutian Arc. the volcano has no distinctive summit and 90% of its surface are covered by glaciers and ice, totalling about 60 cu km in volume, part of which belong to large glaciers from the nearby (non-volcanic) Mount Gerdine.

Hayes volcano consists of scattered remnants of a stratovolcano which was been destroyed by catastrophic eruptions, which were followed by caldera collapse.

Explosive activity 3600-4400 years ago:
The last period of major eruptive activity occurred between about 4,400 to 3,600 years ago. Plinian and subplinian eruptions during this period produced 6 regional tephra layers with an average volume of 2.4 cu km.
Volcanic ash was dispersed over large areas of interior, south-central, and southeastern Alaska. Pyroclastic flows produced during these eruptions descended Hayes Glacier and entered the Hayes River drainage. The pyroclastic flows initiated volcanic debris flows or lahars that flowed down the Hayes River, into the Skwentna River, and probably reached the Yentna River about 110 kilometers downstream from the volcano. The last major eruptive period of Hayes Volcano may have spanned about 200 years, and at least one of the eruptions during this interval was possibly the largest eruption of any volcano in the Cook Inlet region in the past 10,000 years.

Activity during the past 3600 years:
Hayes was probably mostly dormant during the time interval since the series of large eruptions about 4000 years ago. A single deposit of a smaller explosive eruption was identified and dated to about 500 years ago. 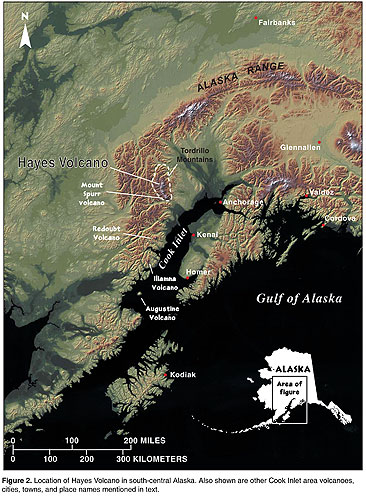