RMK: VA HAS BEEN OBSCURED BY MET CLOUDS. WILL ISSUE ADVISORY IF
VA REAPPEARS ON SATELLITE IMAGERY.

Karymsky, the most active volcano of  Kamchatka's eastern volcanic zone, is a symmetrical stratovolcano constructed within a 5-km-wide caldera that formed during the early Holocene.  The caldera cuts the south side of the Pleistocene Dvor volcano and is located outside the north margin of the large mid-Pleistocene Polovinka caldera, which contains the smaller Akademia Nauk and Odnoboky calderas.
Most seismicity preceding Karymsky eruptions originated beneath Akademia Nauk caldera, which is located immediately south of Karymsky volcano.  The caldera enclosing Karymsky volcano formed about 7600-7700 radiocarbon years ago; construction of the Karymsky stratovolcano began about 2000 years later.  The latest eruptive period began about 500 years ago, following a 2300-year quiescence.  Much of the cone is mantled by lava flows less than 200 years old.  Historical eruptions have been vulcanian or vulcanian-strombolian with moderate explosive activity and occasional lava flows from the summit crater. 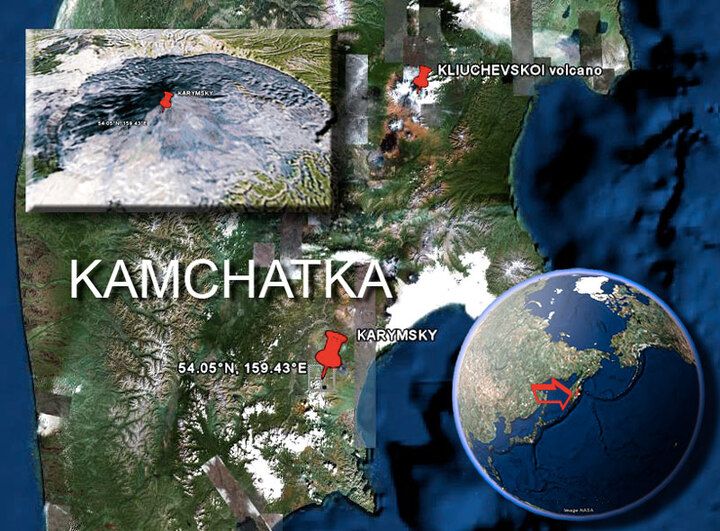 Glossary of geologic terms
A growing list of often illustrated explanations and definitions of geological terms and keywords, with focus on volcanology and seismology.
Kuril Islands

Ethiopia and the Danakil
Ethiopia is a very diverse and beautiful country. Thanks to our numerous expeditions to Erta Ale and Dallol and beyond, we have an extensive collection of images showing the volcano's lava lake, the desert, the colorful hot springs of Dallol, the vast salt lakes, camel caravans and more.
Methana 18-25 Mar 2023

Land of Theseus
The Saronic Gulf opposite Athens is one of the most beautiful and interesting areas of Greece, full of beautiful landscapes, small towns, islands, archeological remains and one of Europe's least known active volcanic areas. Join us on a relaxing tour to discover this fascinating area!
Volcano Tours