Kelimutu (Keli Mutu) volcano in central Flores, Indonesia, is famous for its 3 colorful acid crater lakes, where different salts and oxides in suspension or solution give the lakes varying colors ranging from blue and dark green to intense red. In historic times, few small phreatic explosions have been the only activity at the volcano.
The scenic craters with their lakes are popular tourist destinations.

The western lake, Tiwi Ata Mbupu (Lake of Old People) is commonly blue. Tiwu Nua Muri Kooh Tai (Lake of Young Men and Maidens) and Tiwu Ata Polo (Bewitched, or Enchanted Lake), which share a common crater wall, are commonly green- and red-colored, respectively, although lake colors vary periodically. During the dry season reduction processes let Ba, Cu, and As minerals precipitate, in the wet season, the oxidation and precipitation of iron minerals (ferric oxide: Fe2O3) produces intense red colors.
Active upwelling occurs at the two eastern lakes and is probably fed by subaqueous fumaroles.
Kelimutu volcano is flanked by the older cones of Kelido and Kelibara 3 km to the north and 2 km to the south, respectively.
(Source: GVP)


1995 fatal accident & measurements of the lake
A Dutch tourist fell into Tiwu Nua Muri Kooh Tai lake and died. Rescue searchers climbed into the crater with ropes and oxygen gas masks. During their 5days unsuccessful rescue efforts, they also carried out interesting measurments of the lake. The pH of the lake was measured at 0.5, its temperature 37°C, and minor bubbling was observed at the surface. ...mehr 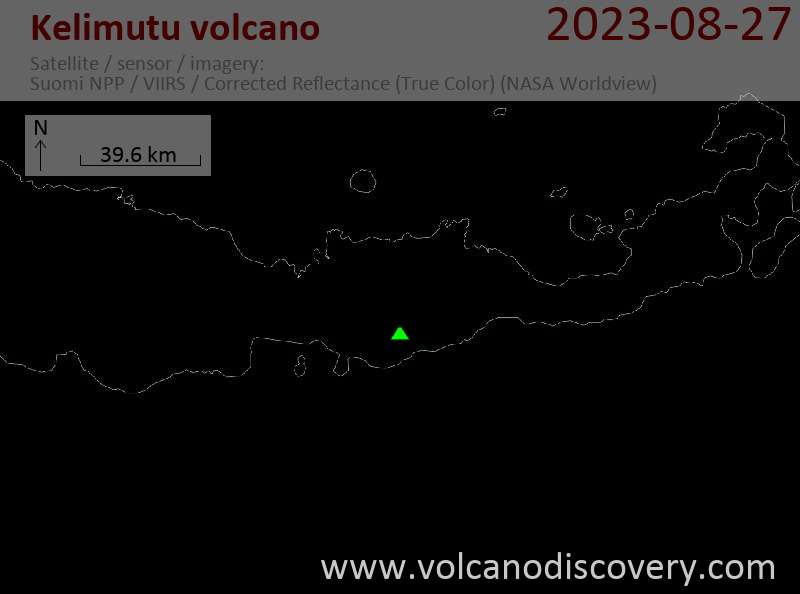 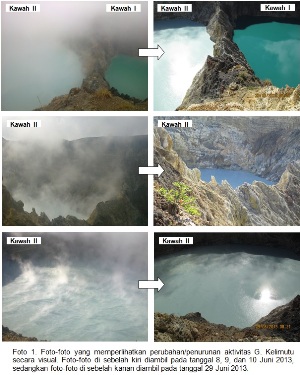 The alert level of the volcano has been placed back to green (normal) by the Indonesian Volcanological Survey. The increased evaporation and the change of color of two of the three crater lakes, that had prompted the raise in alert status in June, have returned to normal levels or been reverted in July, suggesting that the crisis of the volcano is over. Read all
Mi, 10. Jul 2013, 06:00

CVGHM reported that on 6, 10, and 12 June, and during 14 June-9 July, the color of the water in Kelimutu's Crater II (Tiwu Nua Muri Kooh Tai Crater) was bluish white. Diffuse white plumes rose as high as 50 m above the lake's surface and in some areas the water appeared or sounded like it was boiling. A sulfur odor was also reported. ... Read all
App herunterladen

Seismic crisis in SW Iceland
In mid Feb 2021, a strong seismic crisis started on the Reykjanes peninsula, caused by a magmatic intrusion that could lead up to a new volcanic eruption. Follow the latest developments!
Ambrym

Ambrym volcano photos
Ambrym (Vanuatu) is one of the most active volcanoes in the world. Its vast caldera has an amazing moonscape and several active vents that contain boiling lava lakes, most famous Marum and Benbow.
Kelut

Kelut volcano photos
A new lava dome grew inside the crater lake during the effusive eruption in late 2007, replacing most of the lake. Watch the birth of a new mountain!
Iceland
30 Jul-16 Aug 2021

Colors of Iceland
Discover Iceland's fascinating geology and volcanic activity on this relaxed photo and geo tour! Get to see the new volcanic eruption on the Reykjanes peninsula from close!
Kamchatka

Kamchatka photos
A growing list of photo galleries taking during our expeditions in this fantastic part of the world, full of volcanoes, unspoiled nature and colors.
Warum gibt es Werbung auf dieser Seite?