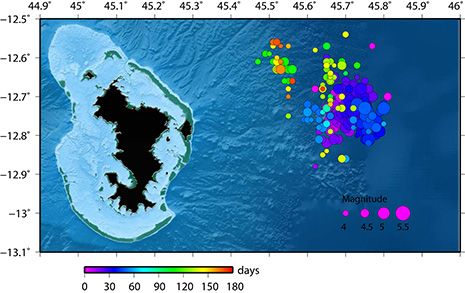 Map of earthquakes stronger than magnitude 3.8 from the 10 May 2018 to the 29 October 2018. Purple and blue earthquakes occured at the beginning of the crisis while yellow and red earthquakes occurred months later. The mean horizontal error on the location is around 15 km. Thus, we cannot see an orientation of earthquakes within any of the two swarm regions. (image: BRGM) 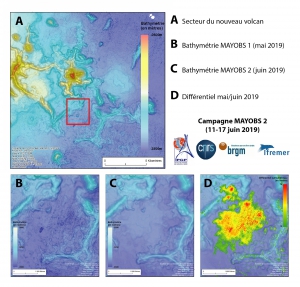 Differential bathymetry applied to map the thickness of the May-June 2019 lava flow to the south of the new volcano. (image: REVOSIMA-IPGP)

Map of earthquakes occurring from the 12 May 2020 to the 1 October 2020, located manually using on-land seismological stations and ocean bottom seismometers (OBS) data. The epicenter location is more precise than two years ago (the colour of dots corresponds to the estimated horizontal error on the location), and smaller magnitudes (the size of dots corresponds to the magnitude) are detected. The two seismic areas are seen, and further East, the new volcano is represented by a red triangle. (image: REVOSIMA-IPGP)
In May 2019, a new volcano was discovered 50 km off the East coast of Mayotte by temporal comparison of bathymetric data. It lies on the seafloor at a depth of 3500 m. It is 820 m tall and the estimated erupted volume is over 5 km3.

Actually, since May 2018, seismic activity affects Mayotte. Earthquakes off Mayotte are grouped in two main areas: the main one is between 5 and 15 km to the East of Petite Terre and appeared later, in late August 2018, while the secondary one, that appeared in early May, is about 25 km to the East of Petite Terre and 25 to 50 km deep. The largest earthquakes are found in the secondary swarm area, including a Mw5.9 earthquake that occurred on the 15 May 2018. Since July 2018, the number of earthquakes decreased slightly, but seismicity continues regularly at low to moderate magnitudes.

The discovery of the submarine volcano explains the earthquake swarms that have been occurring since the 10 May 2018 and, although this seismic activity is not directly below the new volcano, which is further East, the two swarm regions are linked to the volcano by magma pathways. Indeed, during the MAYOBS-1 campaign, scientists observed plumes (that do not reach the surface) by acoustic imagery of the water column above the volcano's summit (the plume was 2 km tall) and above the swarm region about 10 km off Petite Terre, which shows that there are thermal anomalies in the swarm region 10km off Petite Terre as well.


Geodetic observations can also be explained by volcanic activity. Since May 2018, GPS stations on Mayotte are moving eastwards and subsiding. These displacements can indeed be explained by the deflation of a deep magma reservoir to the East of Mayotte. The displacements were the strongest at the beginning of the crisis, which probably means that the deflation speed of the reservoir, and thus the magma flow rate, was at its strongest at the beginning of the eruption.

In July 2019, the MAYOBS-3 and MAYOBS-4 campaigns identified a new lava flow on the western flank of the underwater volcano. It is more than 150 m thick and its estimated volume is 0.3 km3.
Fluid emissions and plumes of volcanic origins were also detected. These plumes do not reach the surface. Those at the top of the new volcano, detected in May and June, no longer existed, while others, smaller, were detected on the new flow. Furthermore, the first photos of the new seafloor were taken, and showed both pillow lavas and corded (more fluid) lavas.

From the second half of the year 2019, the location of volcanic activity seems to have changed. Indeed, since August 2019, horizontal displacement vectors point more to the north than before, and this change in direction can be explained by a relative displacement of the pressure source (the magma), which moved 20 to 25 km to the northwest of its initial location. The new lava flow discovered by the following campaign (MAYOBS-13) in May 2020 was also to the northwest of the volcano. It covered 5 km2.

Ijen volcano photos
Ijen volcano in East Java is famous for its turquoise acid crater lake and the large sulfur deposits that are being mined by local workers. At night, the scene is illuminated by ghostly blue flames, as sulfur ignites.
Lassen Peak