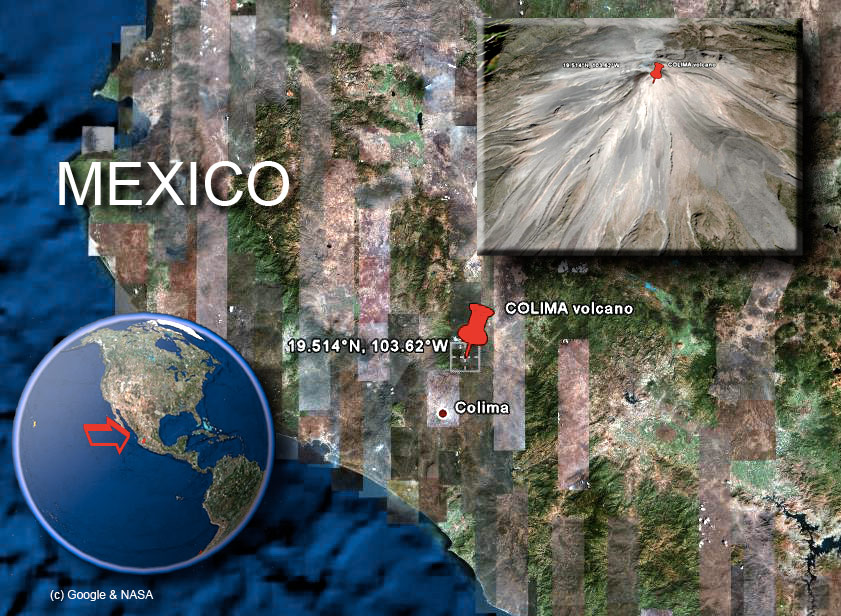 Chronicle of the Colima eruption in 2005:

Colima entered a particularly active phase during March 2005, with an increasing tendency to produce more and more powerful explosions. Whether this trend will turn or further escalate is not known at the time of writing (June 10, 2005). A brief summary of major events during that (ongoing) phase is given here.

Chart published by the Colima Volcano Observatory, comparing the magnitude of major explosions during the last months and years in relation to the explosion on 29 July 1999.

Other facts and aspects

Damage:
On several occasions, ash coated cars and streets in nearby villages as well as the the state capital, Colima. Authorities recommended residents wear masks and sunglasses or goggles to avoid respiratory and eye irritations.


Evacuations:
Despite some non-forced evacuation orders by the authorities taken out in a few sourrounding villages, many families have insisted on staying, concerned their few possessions might be stolen or that they might be forbidden to return. About 300,000 people live within 25 miles of the volcano. Authorities have established an off-limits zone 7.5 km around the crater, and an alert zone is in effect for 10.5 km.

Merapi volcano photos
One of the most active and most dangerous volcanoes of Indonesia: Merapi meaning "the one who makes fire", is a feared but also venerated holy mountain looming over the city of Yogyakarta, capital of Central Java.
Volcanoes outside Earth

Volcanoes in the Solar System
The Earth is not the only place with volcanic activity. Active volcanism also occurs at at least 3 other bodies in our Solar System.
Indonesia