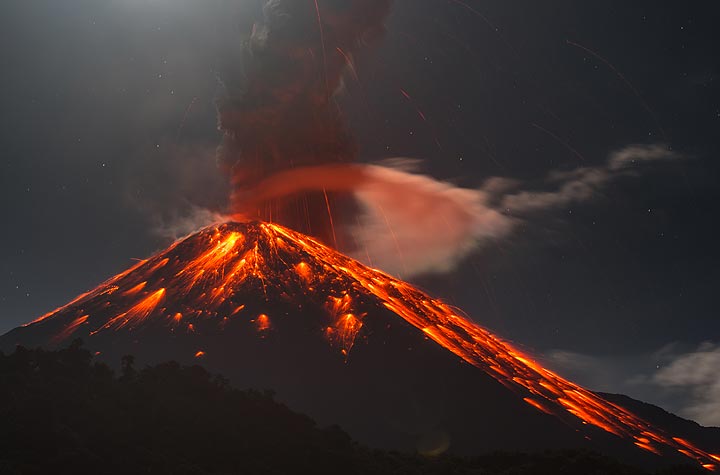 
2002 eruption
Reventador volcano erupted suddenly on 3 November 2002 after 26 years of inactivity. Lava flows descended along the Montana, Marquez and Piedra Fina ravines, destroying roads and highways between Quito and Lago Agrio and damaged local farms.
At 09h12 local time, the main phase of the eruption began, producing an ash column rising to 16-17 km height above the summit. 3-4 hours later, the ash cloud reached the Inter-Andean Valley and the capital Quito ca. 100 km away from the volcano, where it caused almost total darkness in the late afternoon. The ash plume left a layer of fine gray ash up to 3-5 mm thick everywhere.
Over 2 million people were directly affected by the eruption, most of them by ash fall in areas up to 100-200 km distance. Near the volcano, pyroclastic flows devastated the flanks, reaching 8 km from the breached caldera, flowing down steep slopes to reach the Quijos river.
Heavy ashfall occurred in the provinces of Pichincha, Napo and Sucumbios and caused the closing of the international airport of Quito. The Trans Ecuadorian oil pipeline was shut down as precautionary measures.
2 people were seriously injured by impacts of falling tephra. 22 people from surrounding rural areas were evacuated. The Government of Ecuador declared a local emergency and made preparations for the potential evacuation of 3,000 people from the areas closest to the volcano, specifically from the village of El Reventador.
---
Source: Smithsonian / GVP monthly reports
Letzte Satellitenbilder 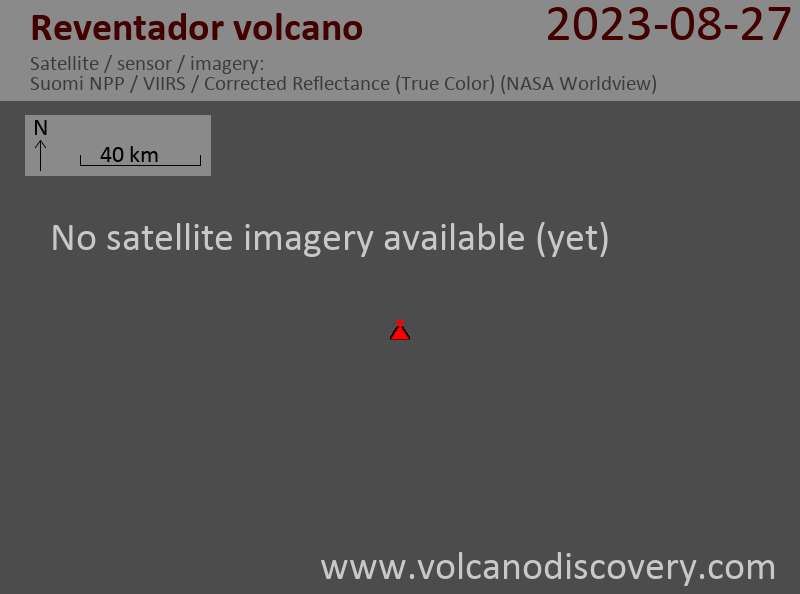 Largest 20 earthquakes past 24 hrs
Our continuously updated worldwide map and list of the most recent largest earthquakes in the world during the past 24 hours.
You can also find top 20 lists for given past days / months / years from the archive.
Vulkane Javas

Vulkantrekking
A physically active tour to visit and climb some of Indonesia's most active and famous volcanoes: Papandayan and Galunggung in West Java, Merapi in Central Java, Kelud, Semeru, Bromo, the Tengger caldera, and Ijen in East Java.
Krakatoa explosion

Eruption from close
On 17 Oct, explosions were particularly violent at Anak Krakatau. We show a series of images of a spectacular explosion captured from close range by boat.
Warum gibt es Werbung auf dieser Seite?