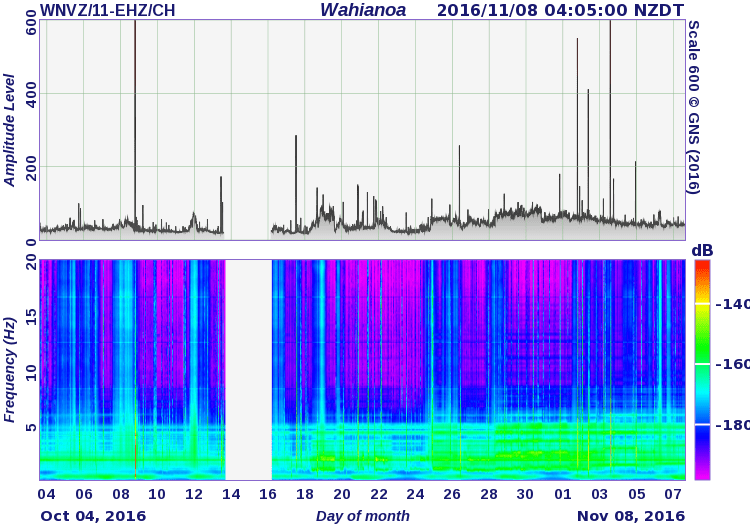 Tremor spectrum and amplitude at Ruapehu volcano (GeoNet)
Volcanic tremor (which is normally present at the volcano) has increased a notch since mid October, but not enough to trigger a raise in alert status of the volcano (which remains at level 1). New Zealand's GNS Science issued a note but does not expect the volcano to erupt soon.
The temperature of the crater lake had again been rising since early September, reaching a maximum of 40ºC on 4 October.

From the original report:
"An increase in the strength of volcanic tremor began on October 18, where a sharp increase was noted before the energy declined a day later. Subsequent tremor increases occurred again on October 25 and 28, and currently remains higher than normal. These tremor pulses do not appear to be related to any variation in the lake temperature. Our records show that similar periods of increased volcanic tremor were present May-June 2016, again when the lake temperature was high. Importantly, no eruptive activity or geysering was noted in Crater Lake during the previous periods of volcanic tremor.

Weather conditions have not been ideal for mountain observations. Nevertheless, our scientists will be visiting the lake to collect water samples for further analysis and making a gas flight when the weather conditions improve.

The active crater at Mt Ruapehu is occupied by Crater Lake and it displays temperatures that typically range between about 15 and 40°C and the phases can last between about 9 and 20 months. The lake cooled to a minimum of 12°C in mid-August and then remained at 13-14°C until early September when it started to heat again and reached a peak of 39.8°C on October 4.

GNS Science volcanologists continue to closely monitor Ruapehu through the GeoNet project. The Volcanic Alert Level for Mt Ruapehu remains at Level 1 (minor volcanic unrest) and the Aviation Colour Code also remains unchanged at Green. The Volcanic Alert Level ranges from 0 to 5 and defines the current status at a volcano. Aviation Colour Codes are based on four colours and are intended for reference only in the international civil aviation community." 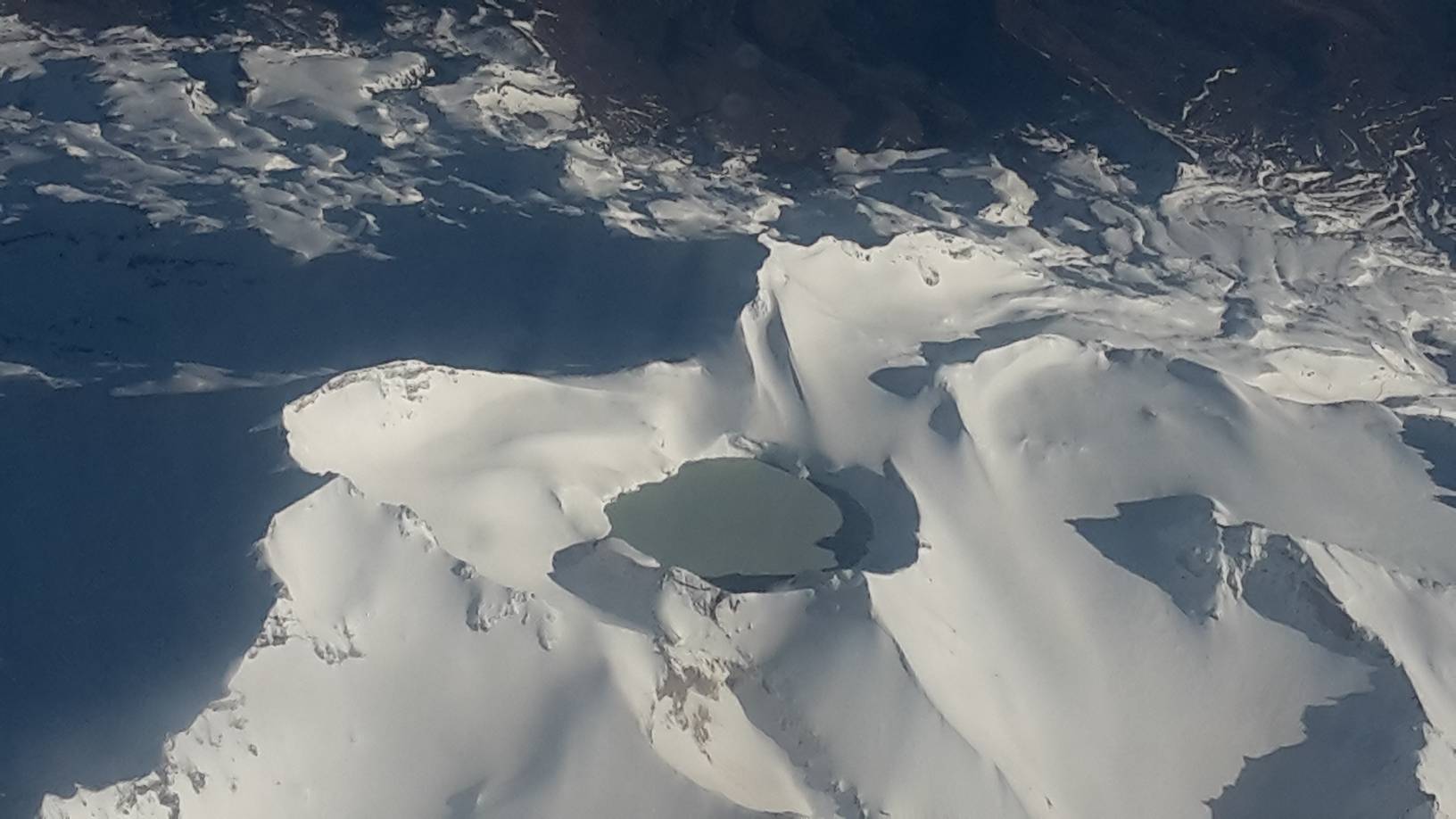 After reaching record-low temperatures in August, the volcano's closely-monitored crater lake has started to heat up very quickly since 2 September, Geonet reported. ... Read all
Mi, 7. Sep 2016, 06:00

On 7 September GeoNet reported that the temperature of Ruapehu's summit Crater Lake had been declining, cooling to 12 ºC on 15 August which was the lowest temperature since the 1995/1996 eruptions, but had recently started to rapidly heat. The temperature began to slowly and variably rise in late August; however, by 2 September a rising trend was apparent. On 4 September tremor levels also increased, and remained elevated. ... Read all
Mehr anzeigen
Mi, 10. Aug 2016, 06:00

GeoNet reported that the temperature of Ruapehu's summit Crater Lake had been declining since May. During an overflight on 10 August scientists recorded gas emissions at typical low background levels. The next day the lake water temperature was 12.6ºC, one of the lowest temperatures since the 1995/1996 eruptions. ... Read all
Mi, 29. Jun 2016, 06:00

On 5 July GeoNet reported that the elevated activity at Ruapehu had declined; gas emissions returned to baseline levels, volcanic tremor decreased to levels detected in the second half of 2015, and the temperature of the summit Crater Lake had declined from a high of 46 to 23 ºC. The Volcanic Alert Level was lowered to 1 (minor volcanic unrest) and the Aviation Colour Code was lowered to Green. ... Read all
Mehr anzeigen
Fr, 20. Mai 2016, 08:07

On 17 May GeoNet reported that the lake temperature of Ruapehu's summit Crater Lake had decreased from a high of 46 degrees Celsius to 39 degrees, with some of the decrease attributed to rain and snowfall. ... Read all
Fr, 13. Mai 2016, 17:38

The alert level of the volcano was raised by a notch from 1 to Level 2 (moderate to heightened unrest) last Wednesday, Geonet informed in a special note. ... Read all
Mehr anzeigen
Mi, 11. Mai 2016, 06:00

On 17 May GeoNet reported that the lake temperature of Ruapehu's summit Crater Lake had decreased from a high of 46 degrees Celsius to 39 degrees, with some of the decrease attributed to rain and snowfall. Moderate levels of volcanic tremor continued, and analysis of water samples collected the previous week showed no changes in the lake chemistry. During recent visits, scientists measured a larger output of volcanic gases. ... Read all
Mi, 4. Mai 2016, 06:00

GeoNet reported that a volcanic earthquake swarm beneath Ruapehu's summit Crater Lake was detected during 25-26 April. This type of swarm has been uncommon at the volcano in recent years, when volcanic tremor has dominated the seismicity. In addition, the crater lake water temperature had been rising since late 2015, from 25 degrees Celsius to 40 degrees in the last half of April. ... Read all
Mehr anzeigen
Sa, 30. Apr 2016, 05:42 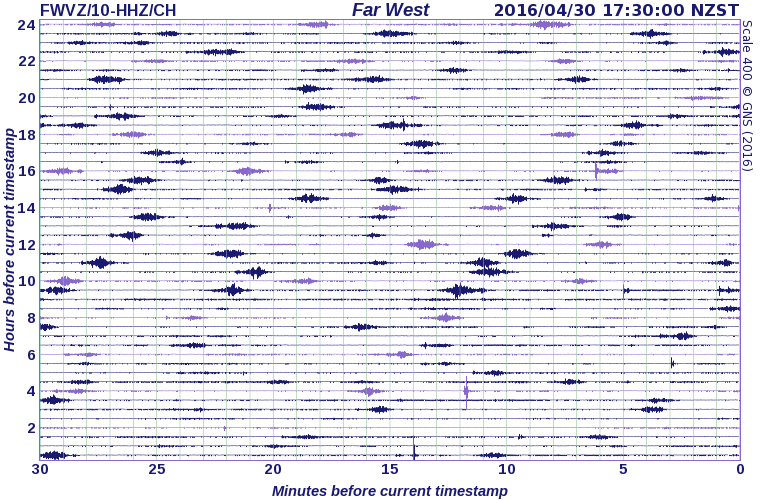 The level of seismic activity has decreased. ... Read all 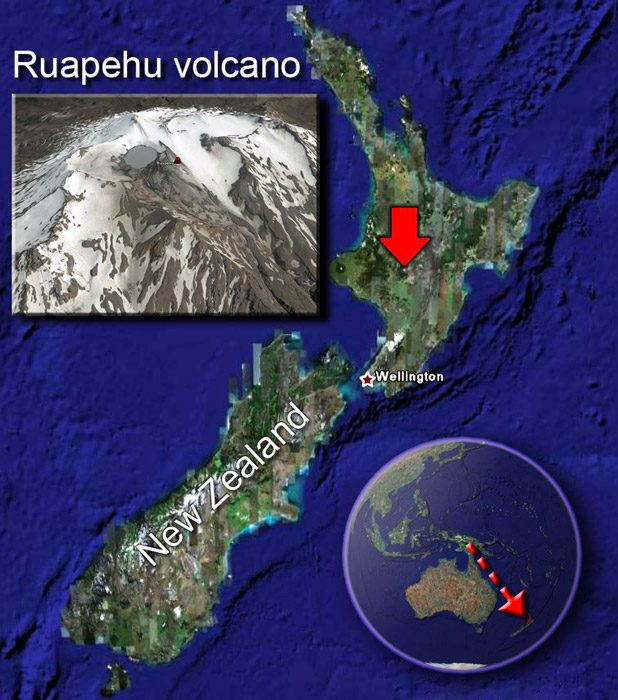 Photos from Mt Bromo in eruption during 2010-11
The most recent eruption of famous Mt Bromo volcano in East Java, Indonesia.
Reykjanes crisis

Seismic crisis in SW Iceland
In mid Feb 2021, a strong seismic crisis started on the Reykjanes peninsula, caused by a magmatic intrusion that could lead up to a new volcanic eruption. Follow the latest developments!
Starke Erdbeben