(pyroclastic cone 1000 m / 3281 ft)
The Aluchin volcanic group is a cluster of 4 young cinder cones located in the Bilibino Region, in the Aluchin and Burgakhchan river basins in western Chukotka (Siberia). The cinder cones of Aluchin volcano could have erupted less than 10,000 years ago. [mehr]

(vulkanische Gebiet 2765 m / 9,071 ft)
The Azas Plateau (also known as the (Northeast) Tuva or Khamsara-Biykhem Plateau) is a large volcanic field is west of the SW tip of Lake Baikal and north of the border with Mongolia. The volcanic field contains cinder cones and lava flows, some of which are less than 10,000 year... [mehr]

(Schlackenkegel 993 m / 3,258 ft)
Balagan-Tas volcano (also known as Indigirsky) is a cinder cone west of the town Zashiversk, about 1300 km SSW of Bennet Island in Siberia. It is located at the Indikirika River near the northwest boundary of Momo-Selenniak depression.
The volcano erupted basaltic lava flow... [mehr]

(cinder cones 1500 m / 4,921 ft)
Dgida volcano (Dgida Basin, Dgida-Tunkin volcanic field) is a group of cinder cones in southeastern Russia 23 km from the border with Mongolia and 125 km SW of Lake Baikal. It belongs to the Tunkin Depression volcanic field and is considered to be related to an intraplate hot spo... [mehr] 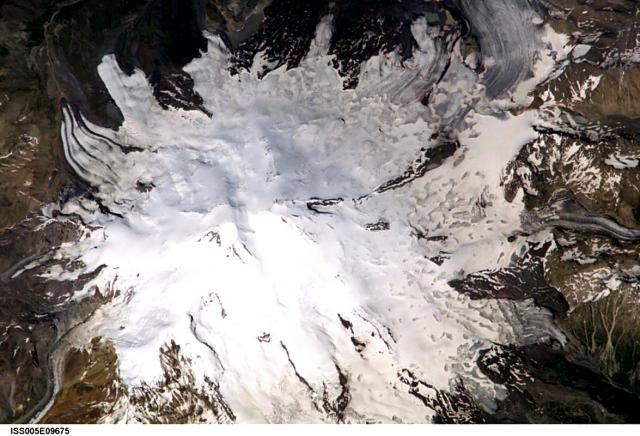 Glaciers radiate from Mount Elbrus, the highest peak of the Caucasus Mountains of SW Russia. Snow-filled craters are visible in this image at both the 5595-m-high eastern summit and the 5633-m-high western summit. Image courtesy of Earth Sciences and Image Analysis Laboratory, NASA Johnson Space Center, 2002
Elbrus volcano is a large stratovolcano in the western Caucasus of SW Russia. It is the highest mountain of Europe (although some argue that it belongs already to Asia) and the highest volcano of the northern hemisphere.
Elbrus has not erupted for about 2000 years, but is c... [mehr]

(vulkanische Gebiet 1200? m / 3,937 ft)
Tunkin (also known as Tunka) volcano is a volcanic field immediately west of the SW tip of Lake Baikal. It contains 5 groups of basaltic cinder cones, most prominently the Khobok cinder cones near the village of Tunka.
The youngest cones occur in the SE part of the field in... [mehr]

(cinder cones 1250 m / 4,101 ft)
The Vitim Plateau volcano is a vast volcanic field northeast of the Baikal Lake. Cinder cones and associated lava flows are spread over an area of about 10,000 sq km. [mehr]

Volcano Calendar 2013
Our first printed volcano calendar, featuring a paroxysm of Etna, a vulcanian explosion of Krakatau, and much more!
Volcanic features

Earthquake monitor
Lists and maps of earthquakes in the world in near real time. Country lists, earthquake archive, and I-felt-it reports.
Kilauea