Volcano quiet for the moment

Current seismic signal from San Cristobal
INETER has published a new statement and summary of the eruption last night, which is translated below. At the moment, no reports of new ash emissions are present and the seismic signal looks rather quiet as well. As INETER mentions, explosions could resume, as an elevated SO2 output suggests that more magma is under way. 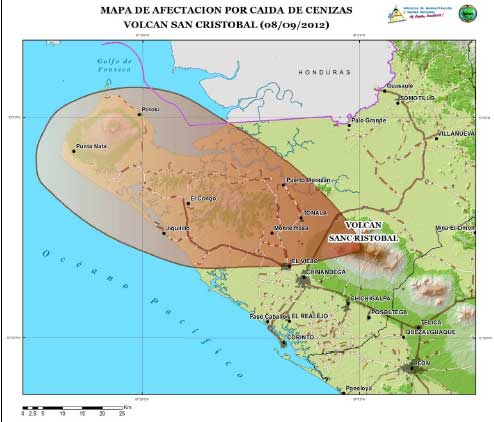 Ash fall map of the 8 Sep eruption (INETER)
The Nicaraguan Institute of Territorial Studies (Ineter) reports in its latest statement from last night that after 3 explosions on 8 Sep, San Cristobal volcano has been relatively quiet. SO2 measurements made yesterday indicate a flux of up 3.221 tons per day, which is well above normal levels and suggests that new explosions should be expected.

No significant seismic activity is recorded. INETER keeps a close watch of the volcano with 2 groups of geologists and volcanologists together with Civil Defence. Analysis of the eruption on 8 Sep gives the following data:

1. The ash fall covered an area of ​​about 2.438 square kilometers (see attached map), distributed in the northwest that includes the municipalities of Puerto Morazán, Potosi, El Viejo, and the towns of Punta Jiquilillo and Punta Ñata. The height reached by the ash was approximately 5,000 meters above the craters and the maximum ash fall deposit was 5 inches in areas very close to the crater, while it was only up to 3 millimeters in more distant places.
2. According to information from Mr. Francisco Ramos Galeano, a resident of the area, there were landslides in the northern part of the crater with falling rocks.
3. Similarly, it was reported that in the northwestern part of the volcano ash and incandescent rocks fell, which caused severe burns to 6 livestock.
4. Inhabitants of the area of ​​Versailles Top, very close to the crater of the volcano, reported having seen a crack or fissure in the earth. INETER specialists will be going to investigate this in the field.
5. For the afternoon and evening there are high chances of rain with thunderstorms in the Department of Chinandega. These rains can increase the emission of gas in the San Cristobal volcano, making acid rain. Surface winds are expected in about 10 km / h. Rains when these winds can reach speeds of up to 20km / h.

Managua, September 9, 2012, 24:30 local time.
---
Links / Quelle:
Update Sun 09 Sep 18:30
Currently, no ash is visible on satellite data. In the latest message 11:33 GMT today, VAAC Washington reports that ash emissions are likely, but not identifiable on imagery due to weather clouds. INETER has not issued further bulletins. This suggests that the eruption has decreased a lot compared to yesterday already.
Update Sun 09 Sep 18:18 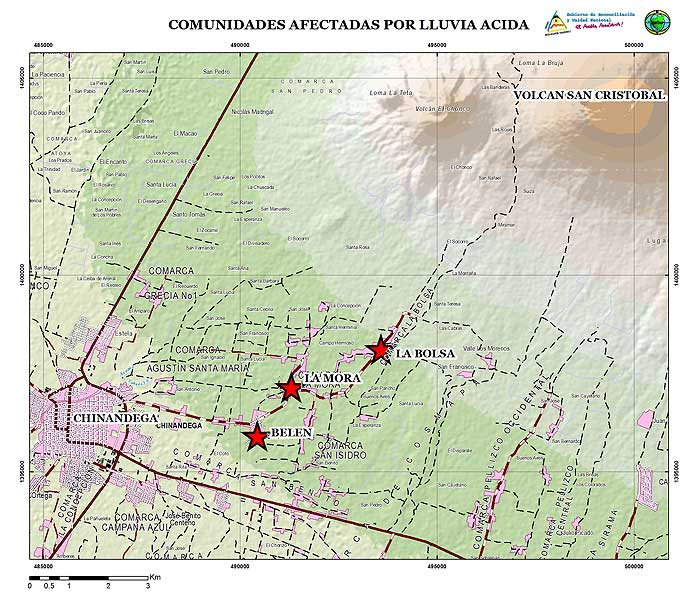 Hazard map for acid rain (INETER)
INETER reported in its last report (from yesterday) that the ash plumes have traveled 50 km to the west-north-west and most affected the communities of Elder, The Greece1, 2, 3 and 4, La Joya, Santa Catalina,El Piloto, Las Banderas, Las Rojas, Carlos Fonseca, Jiquilillo, Mechapa and Cosiguina.
INETER warns of acid rain caused by mixing of water with ash and gases and potential lahars that could be triggered by heavy rainfalls.
Source: www.ineter.gob.ni
Update Sun 09 Sep 18:08 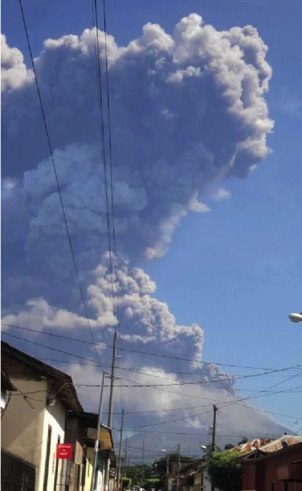 The eruption as seen early on 8 Sep 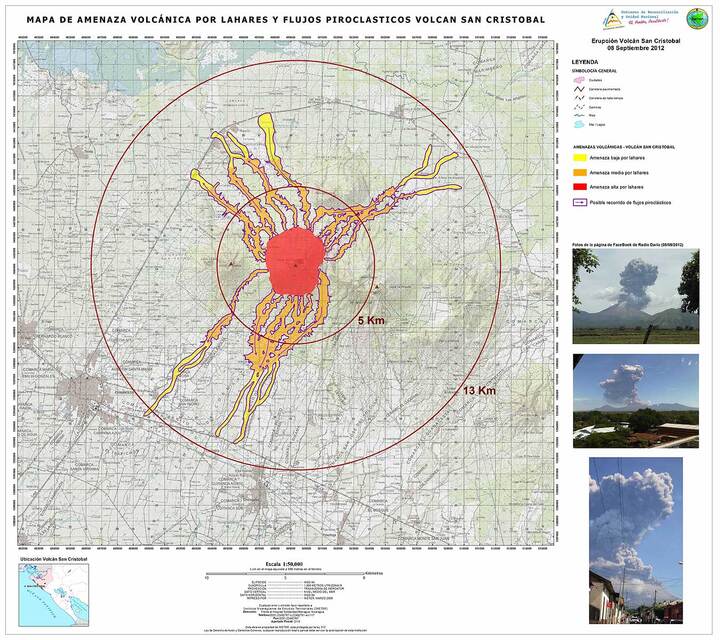 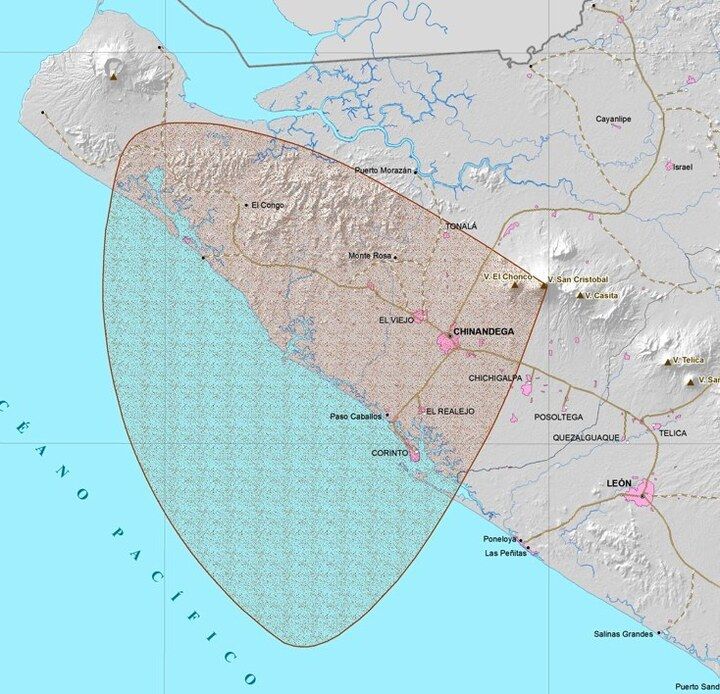 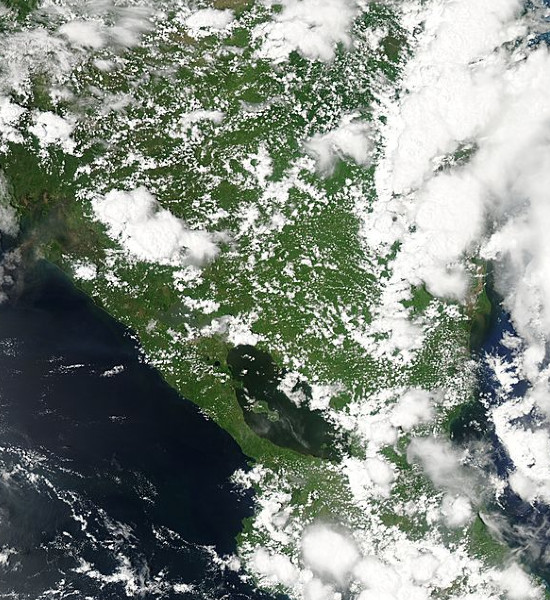 The ash plume from the eruption seen from NASA's Aqua satellite on 8 Sep (upper left corner of image)
Some updates about the eruption:
- Narrow escapes: 1 Canadian (tourist) and 2 young Nicaraguans (guides) have escaped miraculously death when they climbed the volcano and where only a couple of minutes from the crater rim. Suddenly all started trembling and huge incandescent blocks were flying in the air and crashing near them.
Also other people climbing the volcano at lower altitudes were surprised by the 2 strong shakes and the falling hot debris.

- 421 families have been moved to safer grounds.

- This eruption is probably larger than the one in 2006 were ash was thrown 3 km into the air.
An exclusion zone around the volcano has been set to 5 km.

- Yellow alert has been called in the Chinandego district. Leon and Managua have returned to the Green alert

- Ineter, the Nicaraguan volcano agency has reported that they are not expecting further eruptions. A spokesman from the agency said that the explosions are not considered as the start of an eruptive phase. Since 9 AM local time yesterday, no more explosions were observed.

Start of the eruption

Kelut volcano's lava dome in 2007
One of the most impressive lava dome eruptions in recent years. A new dome formed in the crater lake of Kelut volcano (East Java) in late 2007. Enjoy some unique pictures.
Erdbebenberichte

Introduction to Plate Tectonics
The Earth's upper, rigid layer is broken into several plates which are in constant motion to one another. Most earthquakes and volcanoes occur as result of these plate boundaries.
Warum gibt es Werbung auf dieser Seite?