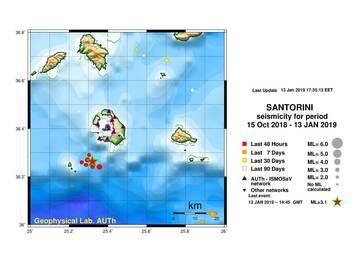 Recent earthquake near Santorini (image: NOA)
An earthquake swarm has been occurring near the island since this morning. So far, 16 quakes of magnitudes between 2 and 3.9 and at depths ranging between about 30-6 km have been detected.
The quakes are clustered about half way between Santorini's SW end and the Christiana Island group.
The strongest shock with magnitude 3.9 occurred at 10:27 local time and might have been felt weakly by residents of the southern part of Santorini.
Although the quakes are near the Kameni line, a tectonic lineament in SW-NE direction which has been the preferred location for magma ascent (i.e. formation of volcanic vents) in the volcano's past few 100,000 years of history, there is currently no indication that the earthquakes are volcanic in origin. It is much more likely that they represent a normal tectonic event.
However, Santorini being both a popular tourist destination and an active volcano, the situation merits close monitoring. 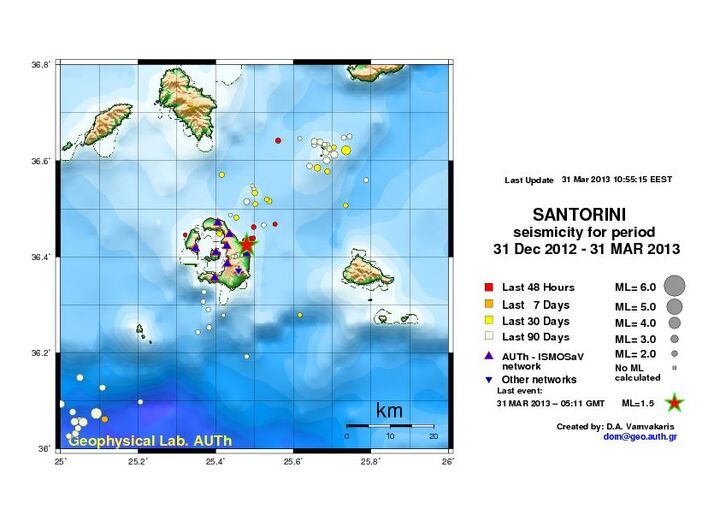 Location of recent quakes at Santorini

Definition of a volcano
A volcano is the term for any place on the surface of the earth, where hot molten rock (magma) reaches the surface.
Chile earthquake 1 April 2014

Great magnitude 8.2 Chile earthquake 1 April 14
Reports, maps and list of aftershocks. Did you know the seismic waves were recorded everywhere in the world?
Erdbebenkatalog

Ebeko volcano photos
Ebeko on Paramushir Island in the northern Kuriles, Russia, is one of the most active volcanoes in the world. It has been in near-constant eruption for years.
Warum gibt es Werbung auf dieser Seite?