(submarine volcano unknown depth)
Coleman Seamount volcano is a submarine volcano in the western Solomon Islands discovered in 1985 by the Hawaiian "Moana Wave" research vessel during a November 1985 to January 1986 cruise. [mehr]

(submarine volcano unknown depth)
Cook volcano is an alleged active submarine volcano in the Western Solomons, whose existence is questionable and not accepted by Smithsonian's Global Volcanism database, although it is listed as one of the 4 active volcanoes (Savo, Kavachi, Cook and Tinakula) of the Solomon Islan... [mehr]

(vulkanische Gebiet 1000 m / 3,281 ft)
Gallego volcano is a group of eroded cones covering a large part of the NW end of Guadalcanal Island. Mount Esperance, a small but well-preserved andesitic cone is said by to have been active less than 2000 years ago, according to local traditions. It is possible, however that th... [mehr]

(submarine volcano -700 m / -2,297 ft)
Kana Keoki is an active submarine volcano in the Western Solomons, located 26 km SW of Rendova Island.
Studies from the 1960s have shown that the dacitic volcano is an active volcano, that forms a 3000 m high seamount on the Ghizo Ridge south of the plate margin between the... [mehr] 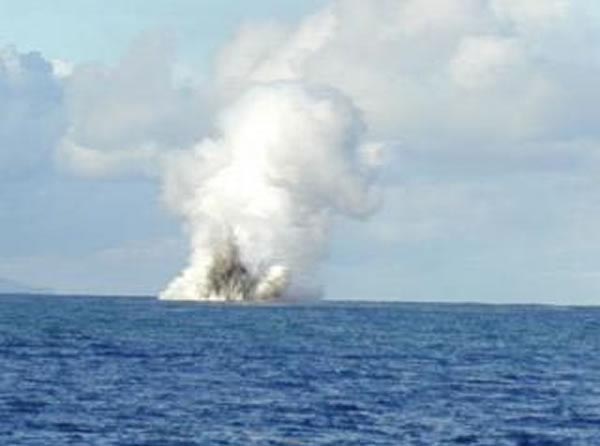 Kavachi erupting on May 14, 2000 (image: NOAA)
Kavachi volcano is a shallow submarine volcano located south of the remote Vangunu Island in the Solomones. It is als known as Rejo te Kvachi, "Kavachi's Oven", and one of the most active of the Pacific with near surface eruptions every few years that often build temporary island... [mehr] 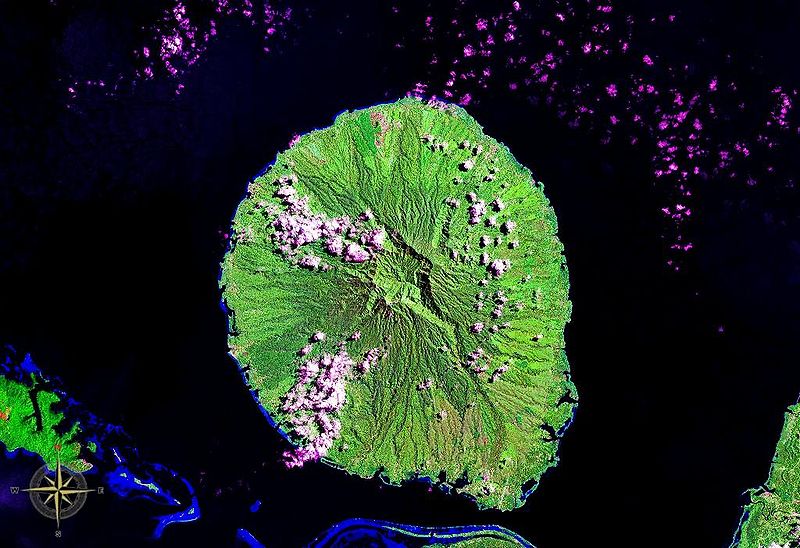 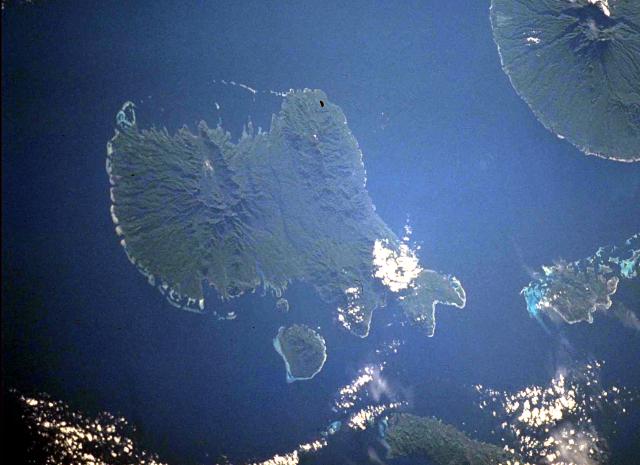 Vella Lavella Island (left center) in the New Georgia Islands in the Solomon Islands chain. North lies to the upper left in this NASA Space Shuttle image. Nonda volcano, the youngest volcanic feature of Vella Lavella Island, is a lava dome located within a well-preserved crater in the northern part of the island. The Paraso thermal area, the small light-colored area at the upper left-center portion of the island, displays solfataras, hot springs, and boiling mud pots. Kolombangara Island is at the upper right. (NASA Space Shuttle image ISS002-727A-2, 2001)
Nonda volcano is an andesitic stratovolcano on Vella Lavella Island in the Solomon Islands. Its lava dome inside a well-preserved crater is the youngest volcanic edifice on the island.
There are no confirmed historical eruptions, but inhabitants reported "smoke" and explos... [mehr]

(Stratovulkan 335 m / 1,099 ft)
Simbo volcano forms the small Simbo Island located in the Western Solomons about 31 km SW of Ghizo. The volcano last erupted sometime between 1900 and 1920, based on oral traditions.
Simbo Island is famous for its head-hunter tribe discovered in the 19th century. This unple... [mehr] 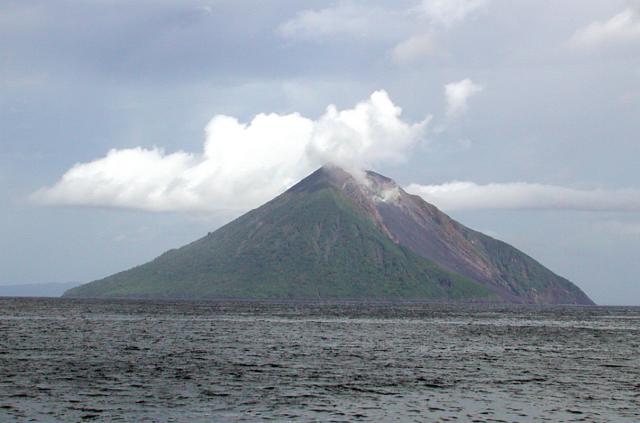 The northern side of Tinakula volcano with its "Sciara del Fuoco" below the crater at the right. Photo by Donn Tolia, 2002 (Geological Survey of the Solomon Islands, courtesy of CSIRO)
Tinakula volcano is located at the NW end of the Santa Cruz islands in the Solomon Islands. It forms a small 3.5 km wide and steep island, which is the upper 25% of a very active stratovolcano that rises more than 3 km from the sea floor. Tinakula is very similar to mehr]

(submarine volcano -240 m / -787 ft)
An unnamed submarine volcano is located 7 km NW of Kavachi volcano and might belong to the same magmatic system, i.e. represent a second vent of the same volcano.
In 1992 thermal plumes were detected from one of its 2 summit craters. [mehr]

Photos from Kamchatka
Kamchatka in Russia's far east is one of world's remotest regions and has an almost unparalleled density of active volcanoes. Look at photos taken during our expeditions from this wonderful corner of the world!
Krakatoa video

Krakatoa explodes
In the afternoon of 17 Oct, a particularly violent explosion occurred at Anak Krakatau, blasting away a portion of the southern crater rim. A similar event might have been the final trigger for the catastrophic landslide that let the cone collapse and cause a devastating tsunami on 22 Dec 2018.
Volcanoes and Spices