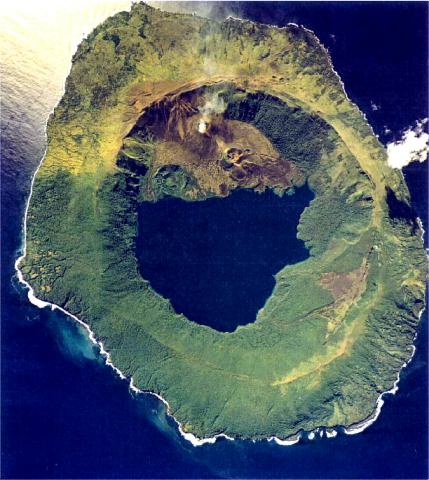 Tofua volcano is the subaerial part of a large frequently active stratovolcano. It forms the 8 km wide circular Tofua Island, dominated by the 5 km wide caldera containing a freshwater lake at only 30 m above sea level and surrounded by steep 300 m cliffs.
The island is know for Captain Bligh who was stranded there during the famous Bounty Mutiny 1789. The first historical eruption of Tofua was observed by Captain Cook in 1774.

The easternmost cone has three craters and produced young basaltic-andesite lava flows, some of which traveled into the caldera lake. The largest and northernmost of the cones, Lofia, has a steep-sided crater that is 70 m wide and 120 m deep and has been the source of historical eruptions, first reported in the 18th century. The fumarolically active crater of Lofia has a flat floor formed by a ponded lava flow. (Smithsonian / GVP volcano information) Nyiragongo volcano photos
Nyiragongo (DR Congo) has the world's largest and most active lava lake. Enjoy our pictures taken during several expeditions over the past years.
Milos
27 Sep-2 Oct 2020

Island of Venus
Milos Island in Greece is one of the most beautiful and photogenic islands of the Mediterranean. Its boasts breathtaking scenery of colorful volcanic rocks, some of the finest beaches of the country, a rich archeological heritage, great hospitality and delicious local cuisine. Come join us to explore this magical island on a 6-days geological tour!
Volcano watching guide

How to watch volcanoes? Which volcano to choose? Some guidelines.
Methana 28 Mar
- 4 Apr 2020