Colima Volcano showed an increase in seismic activity during the last days and several explosions occurred during the past days. According to the Washington VAAC, an explosion on 20 April produced an ash plume to a height of ~6.1 km (~20,000 ft) a.s.l. The activity sparked forest fires on the southeastern slopes of the volcano, but no danger was posed to neighbouring communities.

Since February the subterminal south east crater has undergone to several rock slidings of its inner walls and a large collapse pit has formed on the E side of the cone. 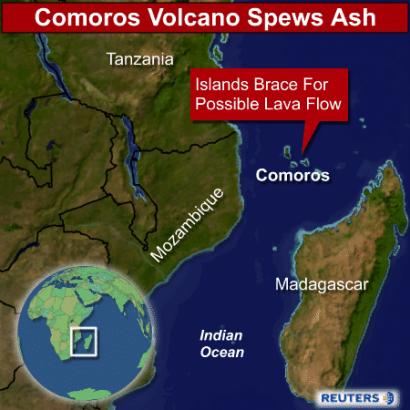 Location of the Comoros Islands (map from press agency Reuters)

Karthala volcano, a shield volcano on Grande Comore, the largest of the Comoros Islands, 300 km off the east coast of Africa, began to erupt on April 17th.
The eruption began with increased seismic activity, and emission of steam and increasing amounts of ash that are causing severe breathing problems in the area immediately near the volcano. From an airplane observation it is apparent that a small lava lake is accumulating inside the crater, giving concern to the possibility of a sudden outbreak.

After an increased seismic activity, a small volcanic eruption was observed at Mt. Aso volcano, Japan, in the Kumamoto Prefecture, about 900 km southwest of Tokyo. According to the Fukuoka District Meteorological Observatory, tiny amounts of gray-white volcanic ash fell near the No. 1 crater of the 1,506-meter volcano around 10 a.m. on 14 April, 2005.

Krakatoa volcano in the Sunda Strait between the islands of Java and Sumatra is showing an increased seismic activity as the Indonesian Volcanological Survey reports. Whether eruptive activity is already taking place, is not known at the moment due to bad obvservation conditions, but it is likely that there is or will be activity in the very near future.
---

Tangkuban Parahu, a volcano in west Java very near the regional capital Bandung (2 million inhabitants) might be coming back to life very soon. The Volcanological Survey of Indonesia has raised the alert level and reports strongly increased seismicity, and strong emission of sulphuric gasses since today. Access to the volcano is fobidden.

Talang volcano in Indonesia erupted on 12 April, 2005, producing ash clouds of about 1 km height (3,000 ft). Talang volcano is located in Sumatra, just 40 km east of the coastal capital of the West Sumatra province, Padang. It is close to the areas affected by recent large earthquakes, but it is dangerous to say that there is a direct link between those events, since this is not known. Although some relation cannot be excluded, volcanoes and earthquakes have very different dynaics.
For safety reasons and because of the possibility of an intensification of the eruption in the near future, authorities have promted the evacuation of around 25,000 people living in areas immediately close to the volcano.

3 May, 2005:
Canlaon continues to produce mild steam and ash clouds, which rise up to around 5-700 m above the active crater and sometimes causing problems with local air traffic and shutdown of nearby airports. 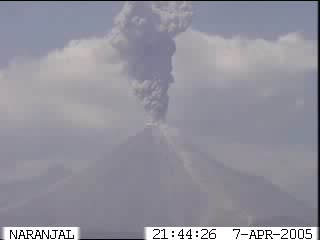 A mild eruption at Colima on April, 7 - Livecam image (from: http://www.ucol.mx/volcan/boletin.htm)

Colima volcano remains at moderate levels of activity. A few explosiones continue to occurr per day, producing minor amounts of ash that do not pose risk to settlements around the volcano, but larger events could occurr at any time.
Source: Colima Volcano Observatory 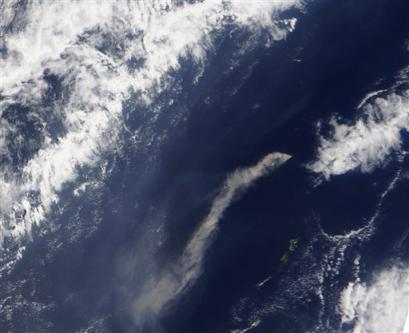 This image was released by NASA Tuesday April 5, 2005; it shows a thick cloud of ash erupted from the Anatahan Volcano, Mariana Islands (Pacific Ocean). According to the Washington Volcanic Ash Advisory Center, a series of low-level eruptions starting on April 4 have created this plume.

CVO (the Cascades Volcano Ovservatory, USGS) reports that the lava dome inside Mt. St. Helens'crater continues slowly to grow. Seismicity is low, and other eruptive activiy is limited to small emissions of steam and volcanic gases, and minor production of ash.
CVO warms of the danger of small lahars and the possibility that the eruption might intensify with little or no warning at any time. 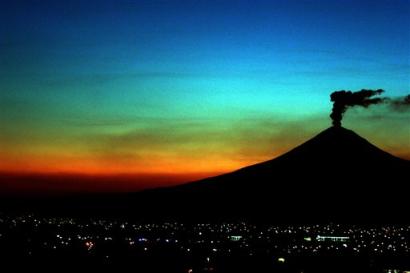 Popocatepetl volcano seen from the west near the city of Puebla, Mexico on March 30, 2005.(AP Photo/Joel Merino)

Popocatepetl volcano, near Mexico City, continues to be active. After its last eruption that had ended in 1927, the volcano woke up from his slumber in 1994 and has since then been active, with changing intensity. At present, it seems to be rather quiet, with an average of 10-20 minor strombolian events per day, that produce nice ash and steam plumes that rise severl 100s of meters. No recent growth of a lava dome has been observed by CENAPRED, the ufficial monitoring organ hosted at the university of Mexico. Although much more violent activity in the near future is unlikely, a safety exclusion zone of 12km around the volcano is maintained. 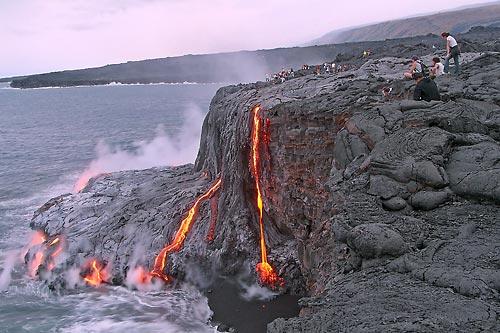 After a slight decrease in activity towards the beginning of March, (visual) lava effusion rates have again increased drastically during the past 10 days. About three times the average volume of lava from Kilauea volcano has been flowing into the ocean, forming a new ocean entry cluster at Kamoamoa. At the time of writing, lava is flowing into the sea at about 10 different points distributed over 3 ocean entry clusters.

Eruptive and seismic activity at Klyuchevsky volcano, neighbour of Sheveluch (also active at the time of writing) has decreased but remains. According to press reports, strong strombolian explosions from the summit crater eject ash and blocks to up to 1000 m above the crater and lava flows are travelling down the upper flanks, interacting with ice and snow, that produce secondary ash clouds.
It cannot be excluded that stronger explosions from the summit crater occurr with no or little warning; they could produce ash plumes that reach as high as 7-8 km or 23,000-26,200 ft above sea level and travel many tens or hundreds of kilometers downwind.
Klyuchi settlement is situated between Shiveluch and Klyuchevsky and receives periodically light ash fall, but the settlement is still being regarded "safe".

As the Russian agency Novosti and the Alaska Volcano Observatory report, Sheveluch volcano, Kamchatka (Russia), is remains highly active. After the violent eruption on February 27, 2005, that destroyed the upper parts of the lava dome, thus lowering the total height of the mountain by 200 m, the lava dome has re-grown by more than 50 m during the past 20 days and keeps increasing. The rapid growth, caused by continuing influx rate of fresh magma, triggers frequent hot rockfalls and small pyroclastic flows.

On the 26th of March, the Civil Protection authorities have partially re-openend access to Stromboli's summit area, which had formally been off-limits since the eruption and landslide in late December 2002. Access is free until 400m elevation without an authorized guide, and above that it is permitted to visit the summit area if accompanied by an authorized mountain guide, but the stay in the summit area is limited to 1 hour total duration and only until 11pm.

The Russian news agency Novosti reports a strong eruption by Sheveluch volcano on March 23, 2005,  that destroyed a camp of vulcanologists and the seismic station at Baidarnaya, located eight kilometers from the volcano.
According to this report, a significant part of the lava dome at the summit has collapsed, and generated a massive flow (probably a pyroclastic flow, not a lava flow as stated ?) that travelled down the slope more than 20 kilometers long. There were no people in the area during the event. According to the news agency, this eruption would be the largest since Sheveluch's disastrous eruption of 1964.

As KVERT (Kamchatkan Volcanic Eruptions Response Team) reports, the eruption at Klyuchevkoy volcano in Kamtchatka has increased dramatically:
"Continuous explosions from the summitcrater could produce ash plumes that reach as high as 10 km or 32,800 ft above sea level and travel many tens or hundreds of kilometers downwind. The current activity of the volcano is very dangerous to aviation. <...>Seismic activity of the volcano has increased. <...> According to visual and video data, agas-steam plume containing some amounts of ash rose up to ~7500 m (24600ft) ASL on March 22 and up to ~ 8500 m (27,800 ft) ASL on March 23, extending to the north-west. There was ash fall at Kluchi from 18:45 till present time on March 23. According to data from AMC Yelizovo, an ash plume rising up to 7,000 m (23, 000 ft.) ASL and extending 70-80 km (44 -50 mi) to the north-west was observed by pilots of aircraft AN-72 N 71602 at 23:05UTC on March 23."

Volcanic activity at Kilauea has decreased in late February and early march compared to the levels in eary-mid February, but is still quite high.
Two ocean entries are still weakly active, one at East Lae`apuki and the other at Ka`ili`ili's ocean entry is glowing.
Several lava flows have been observed on the the Pulama pali and Pu'u 'O'o is still producing a lot of glow, although spattering seems to be less vigorous than in February.

During the past week, lava emission from the last active vent at 2620 m elevation has ceased completely and the effusive eruption that started in early Sept. 2004 is likely to be over.
Sporadic ash emission from the SE crater continues, and weak seismicity above average level is being recorded below the summit area of the volcano at 5-10 km depth. Renewed activity in the following weeks or months is very likely. 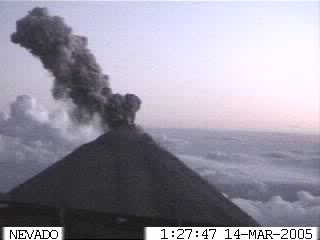 As the volcano observatory at Colima reports, near-constant active Colima volcano has been in a particularly active phases during the past days.

On the 8th of March, the 1st eruption of Piton de la Fournaise on La Réunion island, has been declared to be over. For more than a week, no tremor or other signs of eruptive activity have been recorded.

Intraplate volcanism
A third tectonic setting where volcanism occurs is believed to be the result of mantle plumes and not directly related to plate boundaries. So called hot spot volcanoes fall into this category.
Erdbeben

Eruption from close
On 17 Oct, explosions were particularly violent at Anak Krakatau. We show a series of images of a spectacular explosion captured from close range by boat.
Saronic Gulf
30 Mar - 6 Apr