Cleveland volcano had a moderate ash eruption on 28 Oct. 2006. Based on pilot reports and satellite data, AVO estimated the height of the cloud to be 20,000 ft. above sea level.

On the 28th of October 2006, a new phase of small lava fountains and strong strombolian activity occurred at the SE crater, between 10h32 and ca. 13h00 local time, following an increase in volcanic tremor starting at 05h30. A plume of ash was produced that reached 4 km a.s.l. and travelling south.

A new chapter in Etna's book of surprises: Early on Thursday (around 2am on 26 Oct 2006) a new, short.lived lava flow emerged from the same fracture on the S flank of SE crater as on 23 Oct. Then, two hours later (around 4am), a new lava flow issued from a completely new location, from a new fracture on the south flank of Bocca Nuova at about 3050 m elevation. The flow branches into two arms near its vent and then joins again at the base of the summit cone. At noon of 26 Oct., it was still well alimentated, with an estimated rate of 10m3/sec. It expands in the flat area below the summit cone, where it has cut the jeep road circling the summit area.
In the meanwhile, the flow from the vent ESE of SE crater at 2830 m elevation which appeared on 13 Oct continues to flow into the Valle del Bove and has now reached the Monti Centinari.

After new explosive activity the day before yesterday, that culminated in sustained lava fountains 50-100m high from the summit crater, a new fissure vent has opened on the S flank of SE crater cone, and a new lava flow emerged from there. The flow branched into two arms, both travelling towards the Torre del Filosofo. As of today, activity at the SE crater has ceased for the time being.

The effusive eruption at Piton de la Fournaise volcano is continuing and shows little variation, except that the intensity of the tremor has increased again to 60% of its original value.

In addition to the lava flow from the fissure at 2830 m elevation, SE crater seems to resuming explosive activity. Yesterday, INGV reported a number of strombolian explosions from its summit vent.

Tungurahua had a series of strong eruptions on the afternoon and evening of 18 October 2006. Lava fountains up to 1000 m height were observed. An associated as plumes rose to 8-10 km, visible on satellite images, and ballistic bombs were ejected to distances of 800 m of the crater. Westerly winds caused strong ash fall in the sector of Puyo east of the volcano.
During the night of 18-19 Oct, activity decreased again, but as a precaution, 300 people from nearby villages are reported evacuated.

Bulusan had another phreatic explosion on Thursday 19 Oct, 2006, at 18h44 local time, emitting an ash plume rising to 3-4 km elevation.

An unusually strong explosion took place on Stromboli on 16 Oct. at 19h11 local time. One of the vents of the central crater emitted a lava fountain that lasted 14 seconds, throwing large incandescent blocks all over the crater terrace and the upper slopes of the Sciara del Fuoco. The lava emission was followed by a strong jet of gas that lasted 3 minutes.

The lava flow on Etna is still active and flowing into the Valle del Bove, with little changes since its start on 13 Oct. 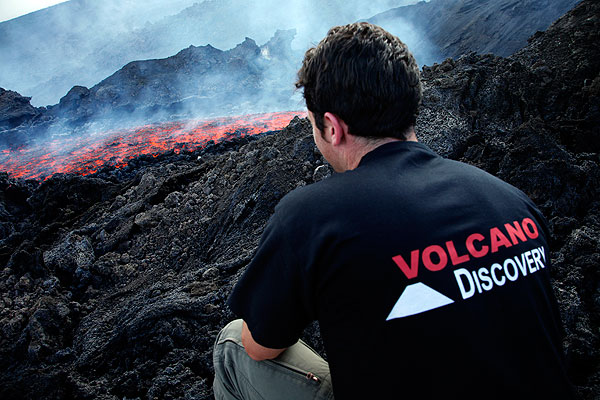 A new lava flow started today from a vent at 2830 m elevation SE of the SE crater - in perfect timing with the arrival of our ongoing tour on Etna.
The flow emerges as a viscous aa-type flow located on the ESE-WNW fracture system that has been feeding the recent effusive and explosive activity at the SE crater. The flow is descending into the Valle del Bove. 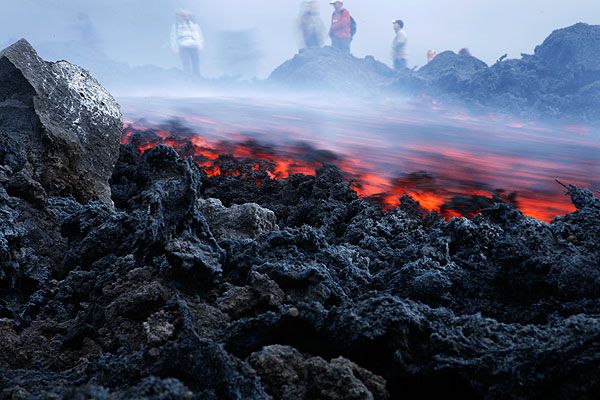 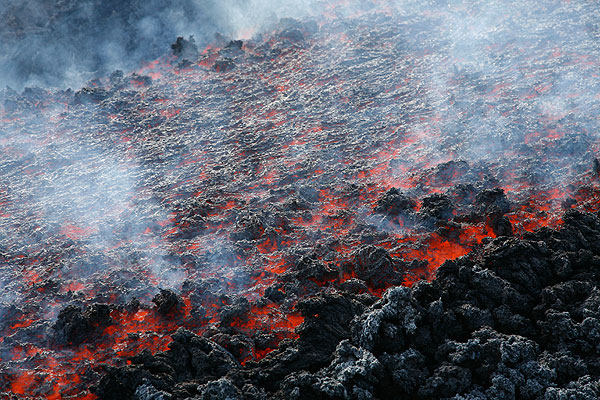 A new eruption took place the  morning of 10 Oct at Bulusan volcano causing ash fall up to 5 mm of thickness in the area of Irosin and Bulan.

Bulusan stratovolcano has a new eruptive episode yesterday 10 Oct, 2006, at 17h15 local time and produced an ash cloud reaching 3 km altitude that drifted towards the villages of Casiguran, Irosin and Bulan.
Since its reawakening on 21 March 2006, Bulusan has had 10 eruptions producing ash fall in the surrounding areas. On 24 June, a large lahar (=mud flow) travelled down the slopes of the volcano.

After the gant explosion on 6 Oct, probably larger than the eruption in 1994, Tavurvur continues to erupt at much lower intensity, with explosions producing ash plumes not higher than 3 km at the moment.

Tavurvur volcano (Rabaul caldera, Papua New Guinea) had a large explosive eruption on 6 October, 2006, sending a plume of gas and ash to a height of 18 km. Rabaul was receiving moderately heavy ash fall, to the south and west heavy lapilli were falling around the south and south-west parts of the caldera these were ~1mm in diameter, with a few lithics up to 3 cm, about a 1cm has been deposited in the Blue Lagoon-Vulcan sector.  Ashfall was occurring in Kokopo and even Warangoi. Tavurvur was obscured from all directions. 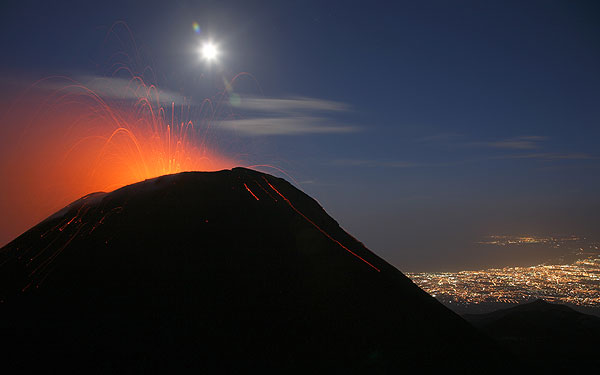 SE crater in strombolian eruption on the evening of 4 Oct. 2006 Lights of Catania in background.

The eruption at the SE crater that had started on the 3rd of Oct. 2006 ended this this morning again (6 Oct.). The activity (which had begun in perfect timing for our tour on Etna scheduled from 4-7 Oct)  was characterized by near-constant strombolian explosions from the summit crater of SE crater, throwing bombs to about 50-150m height, as well as the emission of a viscous lva flow reaching about 300-500m length. Large, round incandescent boulders often detached from the flow and rolled down the slope into the Valle del Bove. 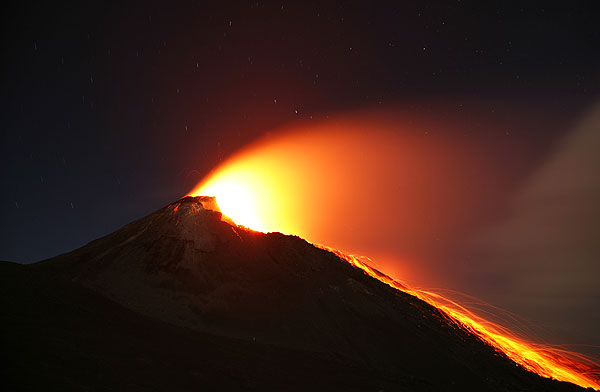 Visual observations show that the dome has continued to grow at a moderate rate during the reporting period. Growth appears to have occurred predominantly in the summit area, on the eastern side of the dome, with a prominent lobe growing in this location. The vents which became active at the end of August, one situated just inside Gage's wall and the other situated on the summit of the dome, remain active, periodically producing both ash and gases. There have also been a number of pyroclastic flows during the reporting period, some of which appear to have had explosive onsets. Northerly winds during the 28 and 29 September resulted in minor ash fall in inhabited areas.

The eruption at Piton de la Fournaise volcano is fading away. Although some weakl alimented lava flows are still active inside Dolomieu crater, there is no more lava lake activity visible inside the new crater. The amount of tremor has been decreasing a lot over the past days.

update 1 October 2007:
As of today, all eruptive activity at the summit craters has ceased. However, it is expected that activity could soon resume again.
26 Sep 2007:
Etna is active again. The 3rd eruption of Europe's largest active volcano in 2006 started on 24 of Sep 2006 and seems to be a like a continunation of its second short-lived one terminated a few weeks ago. From the central crater of the SE cone, mild strombolian explosions are taking place, along with a slow-moving lava flow emerging from a breach in its eastern flank.

Blue flames of burning sulfur
Ijen volcano in East Java has one of the most impressive sulfur deposits on earth. They are so hot that the sulfur often ignites - a mysterious display at night caught on camera.
Tourtypen