Japan hit by massive 6.8 quake, no significant damage or injuries 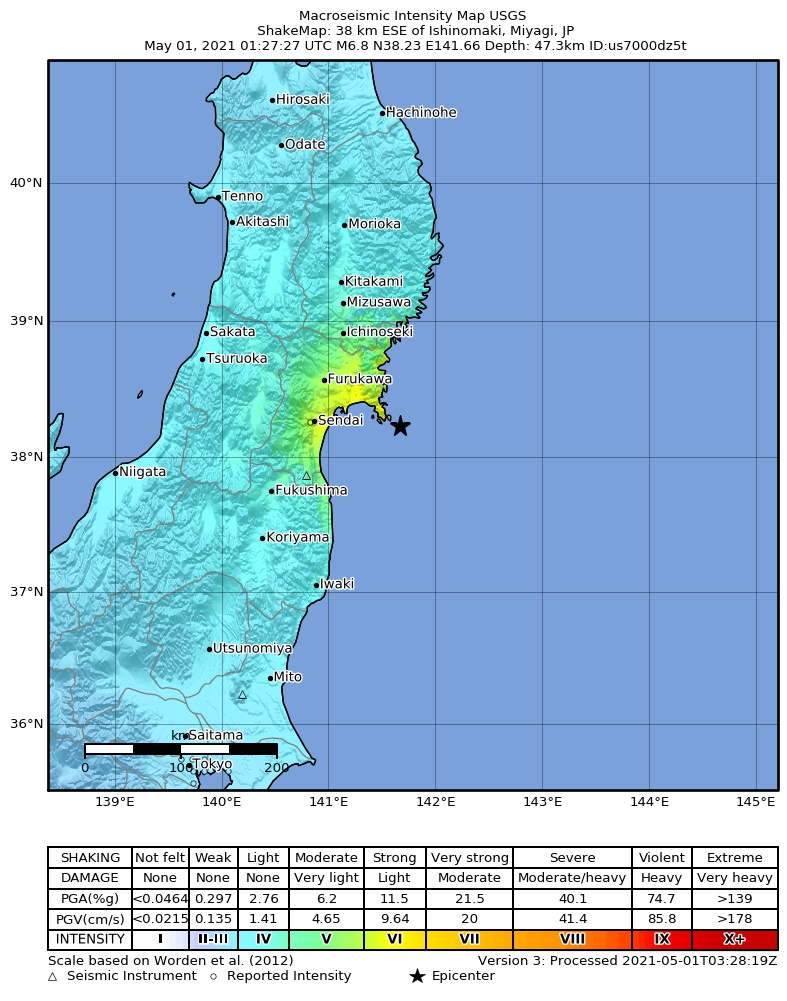 Map showing shaking over Japan experienced by today's earthquake (image: USGS)
A large quake of magnitude 6.8 struck northeast Japan this morning, but seems to have caused no significant damage or injuries, thanks to the country's excellent building standards and preparedness for large quakes.
No tsunami alert was issued - fortunately, the quake was too deep and the mechanism of the faulting that occurred did not trigger any significant waves.
Along a 100 km stretch of the coast near Sendai, people experienced strong shaking (VI on the Mercalli scale). Beyond the area of strong shaking, it was felt more lightly in up to several hundreds km distance, over large parts of Japan. Our monitoring service received numerous reports from people all over Honshu who felt it within minutes after the quake struck. Most people described horizontal ground movements that lasted 10-20 seconds, depending on the distance from the epicenter, suggesting that it was mainly the secondary (side-wise swinging) earthquake waves that reached the country's interior.
Especially central eastern Honshu, large earthquakes are no strangers: Today's quake occurred only 40 km SE of the magnitude 7 earthquake on 20 March this year, a similar one in February, and 70 km west of the catastrophic Tohoku quake on 11 March 2011, infamous for the large tsunami and following nuclear disaster at Fukushima.

Japan's bullet train (Shinkansen) services were temporarily suspended throughout northern Japan, in order to check for possible damages to the rail systems by the quake. As of time of this update, the services in Kanto and Tohoku areas are still on hold. For updated information, please visit the website of the East Japan Rail website.
Some power plants and oil processing refineries shot down temporarily as precaution as well, but reported no damages and have been restarting their operations.
Details about this quake
If you felt it, report it through our site or app right now!
Download and Upgrade the Volcanoes & Earthquakes app to get one of the fastest seismic alerts online:
Android | IOS
Earthquake data:
I felt this quake
Date & time: 1 May 10:27 am (GMT +9) local time (1 May 2021 01:27 GMT)
Magnitude: 6.8
Depth: 61.0 km
Epicenter latitude / longitude: 38.2°N / 141.6°E 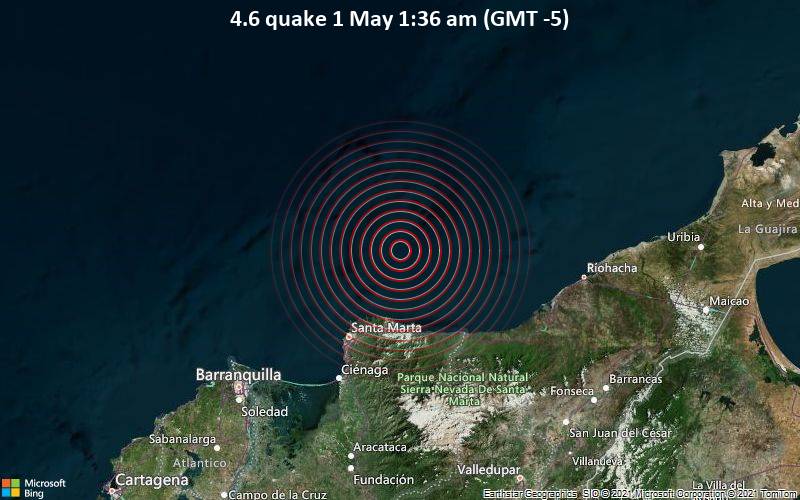 An earthquake of magnitude 4.6 occurred early morning on Saturday 1 May 2021 at 1:36 am local time near Santa Marta, Departamento del Magdalena, Colombia, as reported by the German Research Centre for Geosciences (GFZ). ... Read all
Sat, 1 May 2021, 06:51

Earthquake reported about 20 minutes ago near Penonomé, Coclé, Panama 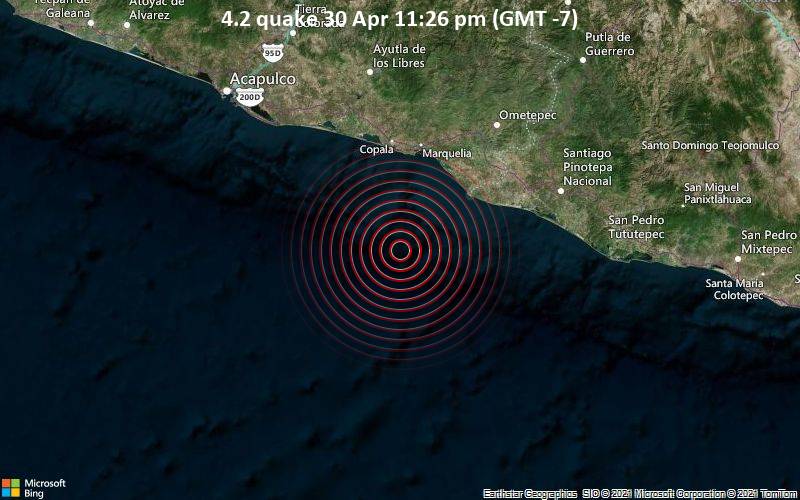 Earthquake reported few minutes ago in or near Panama

We are receiving unverified early reports of seismic activity in or around Panama at approximately 06:13 GMT. There are no details yet on the magnitude or depth of this earthquake. We expect more accurate data to emerge in the next few minutes. The location and magnitude mentioned are indicative and temporary until the AllQuakes monitoring service receives more exact scientific data from a national or international seismological agency. Check back here shortly and stay safe. ... Read all
Show more
Sat, 1 May 2021, 03:55 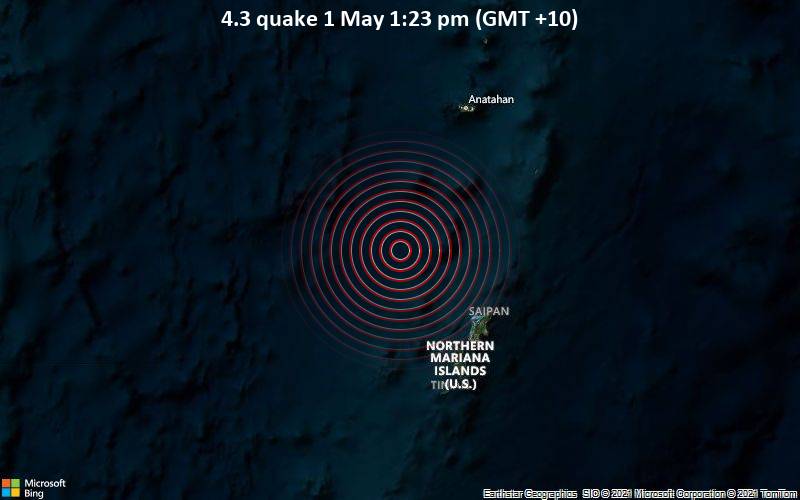 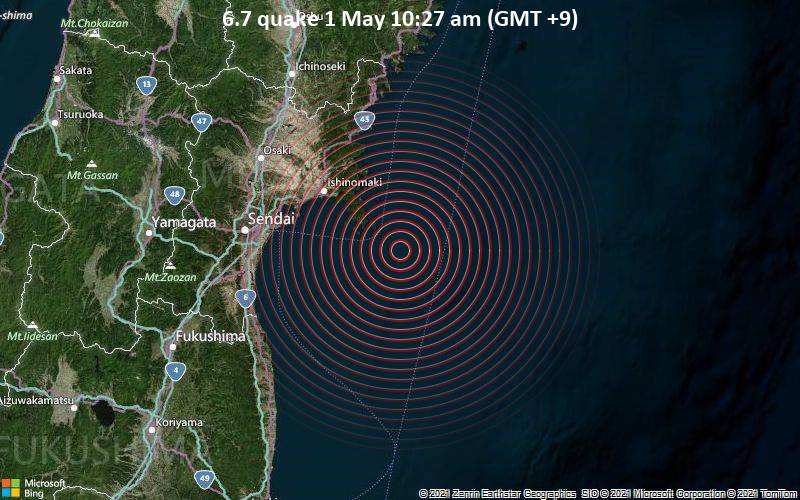 The German Research Centre for Geosciences (GFZ) reported a magnitude 6.7 quake in Japan near Ishinomaki, Ishinomaki Shi, Miyagi, only 12 minutes ago. The earthquake hit in the morning on Saturday 1 May 2021 at 10:27 am local time at a moderately shallow depth of 63 km. The exact magnitude, epicenter, and depth of the quake might be revised within the next few hours or minutes as seismologists review data and refine their calculations, or as other agencies issue their report. ... Read all
Show more
Sat, 1 May 2021, 01:27 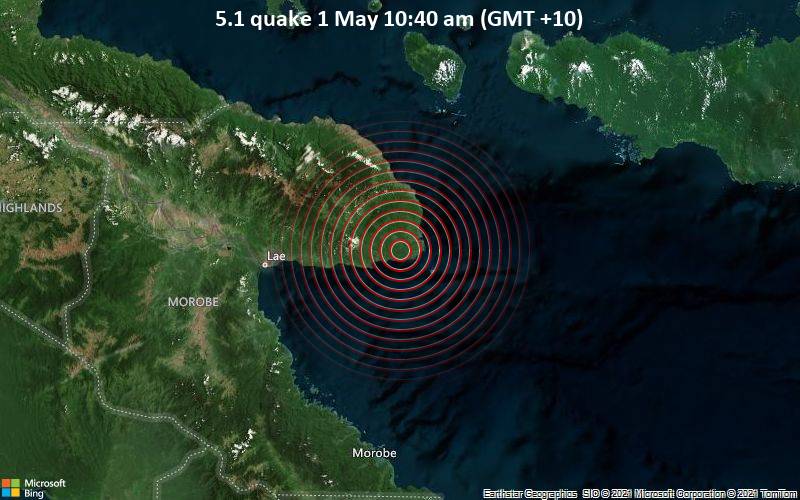 Papua New Guinea was shaken near Lae, Morobe Province, by an earthquake of magnitude 5.1 only 20 minutes ago, Indonesia's Meteorology, Climatology, and Geophysical Agency reported. ... Read all
Show more
Sat, 1 May 2021, 00:37 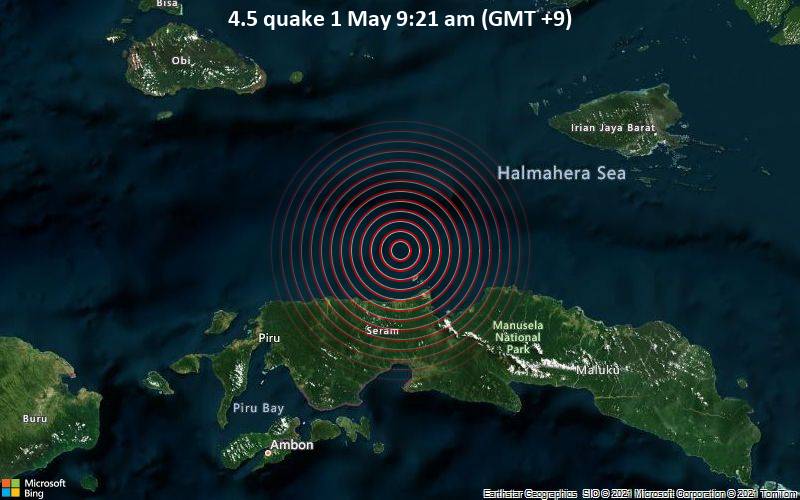 An earthquake of magnitude 4.5 occurred only 14 minutes ago 85 km north of Amahai, Indonesia, Indonesia's Meteorology, Climatology, and Geophysical Agency reported. ... Read all
Sat, 1 May 2021, 00:25 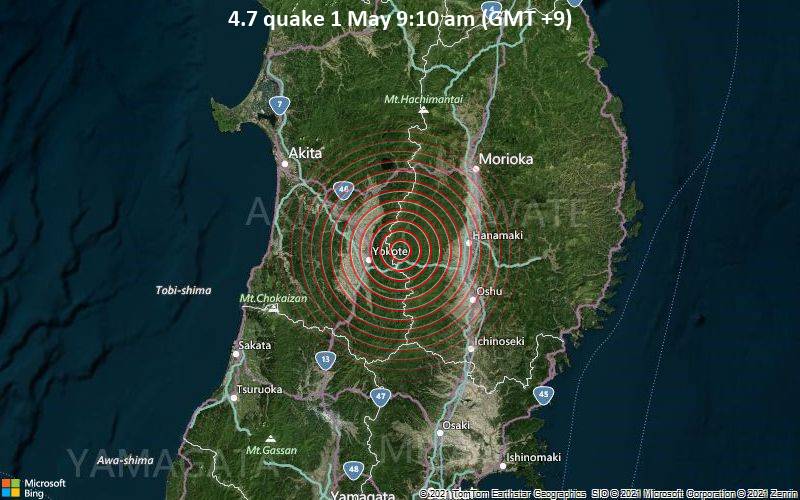