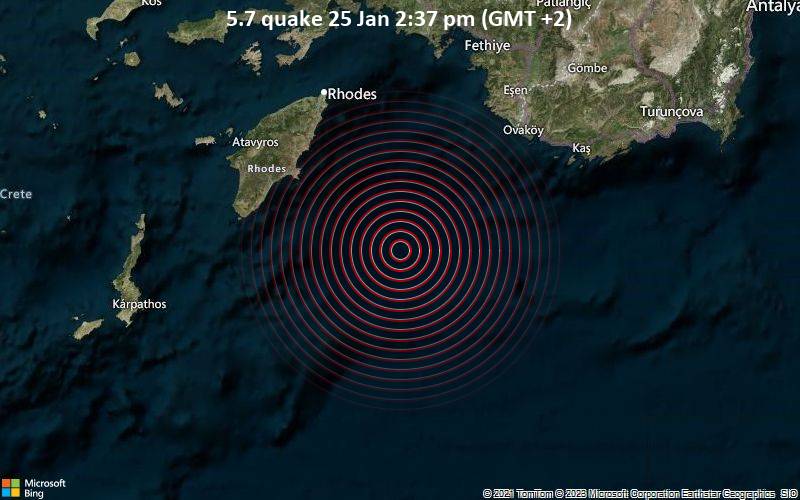 5.7 quake 25 Jan 2:37 pm (GMT +2)
An earthquake of magnitude 5.7 occurred early afternoon on Wednesday, January 25th, 2023, at 2:37 pm local time near Rhodos, Dodekánisos, South Aegean, Greece, as reported by the National Observatory of Athens (NOA).
According to preliminary data, the quake was located at a shallow depth of 10 km. Shallow earthquakes are felt more strongly than deeper ones as they are closer to the surface. The exact magnitude, epicenter, and depth of the quake might be revised within the next few hours or minutes as seismologists review data and refine their calculations, or as other agencies issue their report.
A second report was later issued by the United States Geological Survey, which listed it as a magnitude 5.9 earthquake. Other agencies reporting the same quake include the Kandilli Oservatory and Earthquake Research Institute in Istanbul (KOERI-RETMC) at magnitude 5.7, Italy's National Institute of Geophysics and Volcanology (INGV) at magnitude 5.7, France's Réseau National de Surveillance Sismique (RéNaSS) at magnitude 5.8, the German Research Centre for Geosciences (GFZ) at magnitude 5.9, the citizen-seismograph network of RaspberryShake at magnitude 5.8, the citizen-seismograph network of RaspberryShake at magnitude 5.9, and the European-Mediterranean Seismological Centre (EMSC) at magnitude 5.9.

Based on the preliminary seismic data, the quake was probably felt by many people in the area of the epicenter. It should not have caused significant damage, other than objects falling from shelves, broken windows, etc.
In Lindos (pop. 720) located 63 km from the epicenter, Lardos (pop. 1,300) 69 km away, Archangelos (pop. 5,400) 71 km away, Afandou (pop. 5,600) 75 km away, Faliraki (pop. 6,000) 77 km away, Rhodos (pop. 56,100) 86 km away, Ialysos (pop. 11,300) 87 km away, and Kremasti (pop. 4,700) 88 km away, the quake should have been felt as light shaking.
VolcanoDiscovery will automatically update magnitude and depth if these change and follow up if other significant news about the quake become available. If you're in the area, please send us your experience through our reporting mechanism, either online or via our mobile app. This will help us provide more first-hand updates to anyone around the globe who wants to know more about this quake.
Quake updates
If you felt it, report it through our site or app right now!
Download and Upgrade the Volcanoes & Earthquakes app to get one of the fastest seismic alerts online:
Android | IOS
Earthquake data:
I felt this quake
Date & time: Jan 25, 2023 2:37 pm (GMT +2) local time (25 Jan 2023 12:37 GMT)
Magnitude: 5.9
Depth: 22.0 km
Epicenter latitude / longitude: 35.79°N / 28.61°E 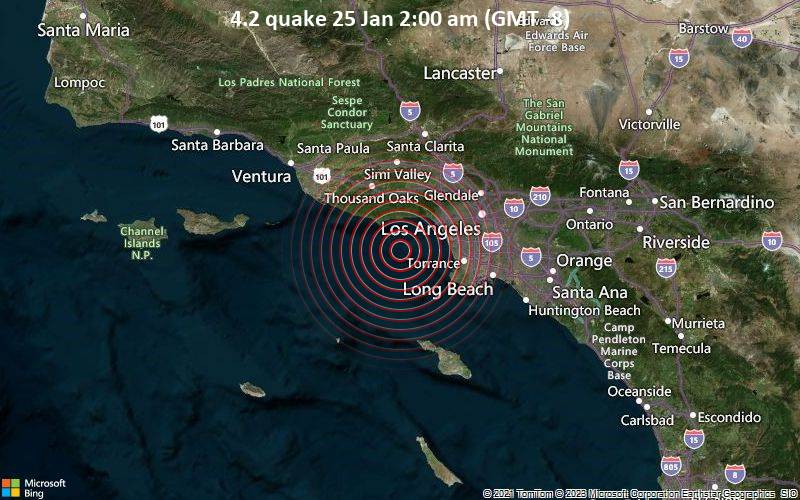 We are receiving unverified early reports of ground shaking possibly caused by seismic activity in or near Ciudad Nezahualcoyotl, México, Mexico on 25 Jan 2023 (GMT) at approximately 10:00 GMT. ... Read all 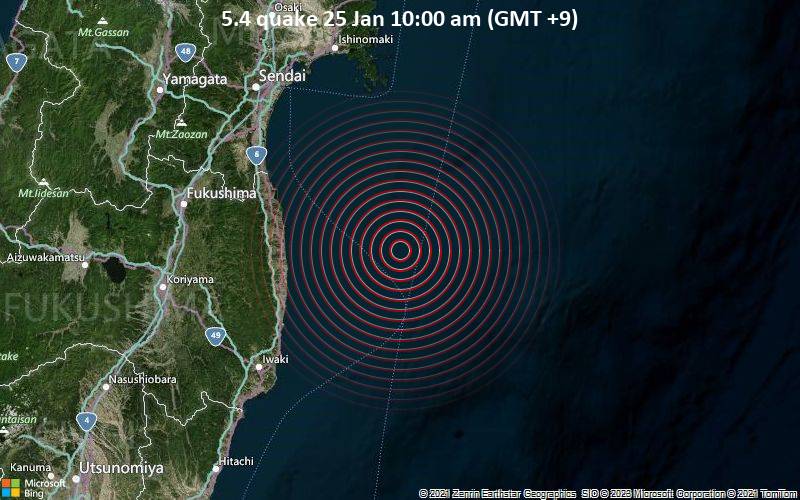 An earthquake of magnitude 5.4 occurred in the morning on Wednesday, January 25th, 2023, at 10:00 am local time near Iwaki, Iwaki-shi, Fukushima, Japan, as reported by Japan's National Research Institute for Earth Science and Disaster Resilience (NIED). ... Read all
Show more 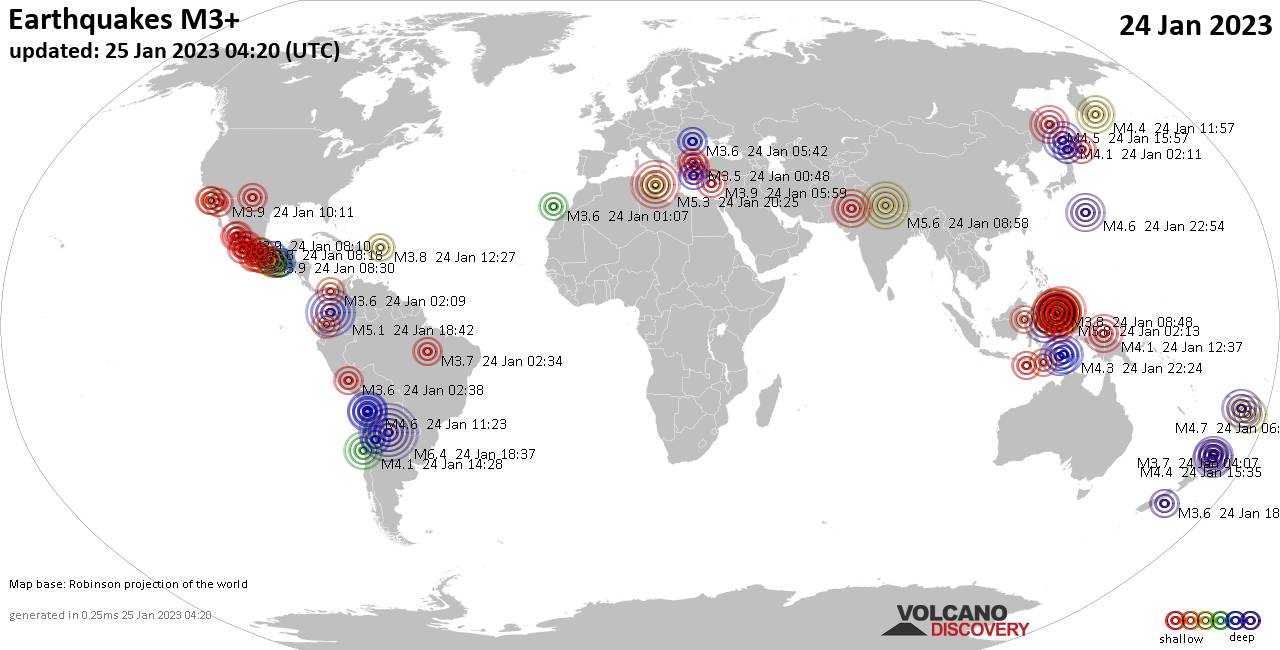 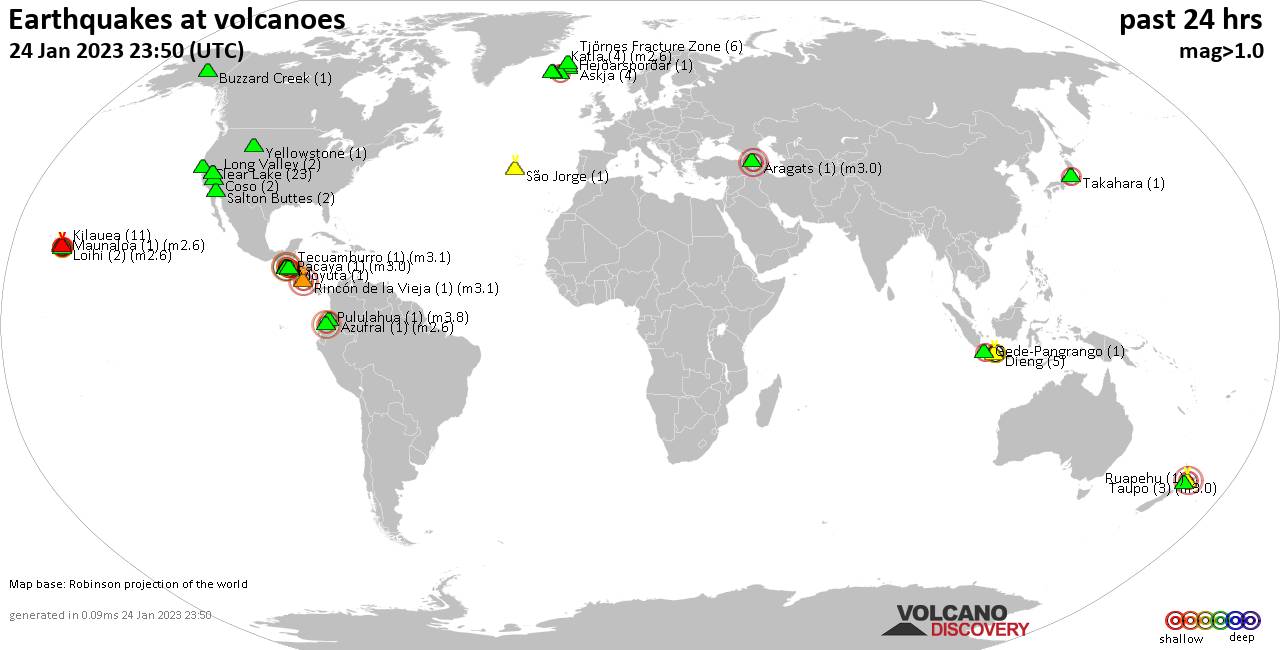 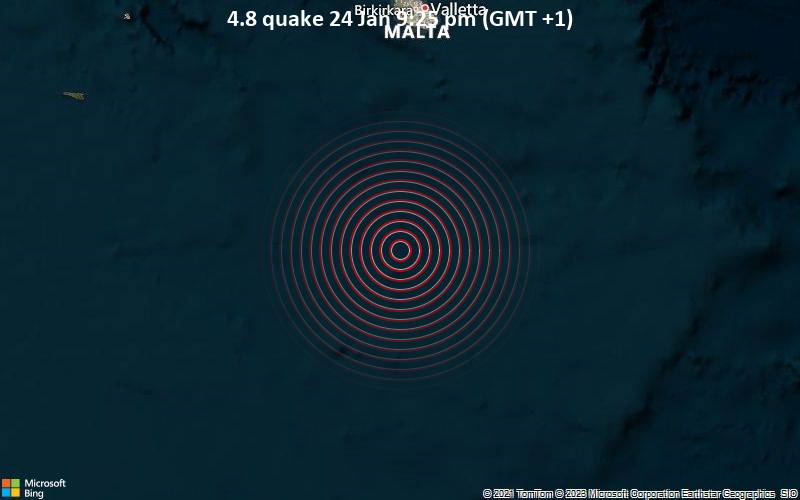 A magnitude 4.8 earthquake near Qormi, Malta, was reported only 19 minutes ago by the German Research Centre for Geosciences (GFZ), considered one of the key international agencies that monitor seismic activity worldwide. The earthquake occurred at a shallow depth of 10 km beneath the epicenter in the evening on Tuesday, January 24th, 2023, at 9:25 pm local time. The exact magnitude, epicenter, and depth of the quake might be revised within the next few hours or minutes as seismologists review data and refine their calculations, or as other agencies issue their report. ... Read all

We are receiving unverified early reports of ground shaking possibly caused by seismic activity in or near Faridabad, Haryana, India on 24 Jan 2023 (GMT) at approximately 08:59 GMT. ... Read all
Show more 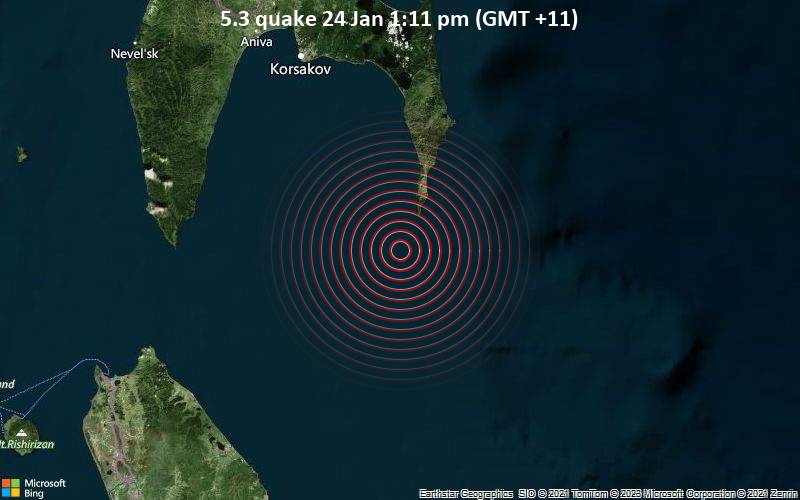 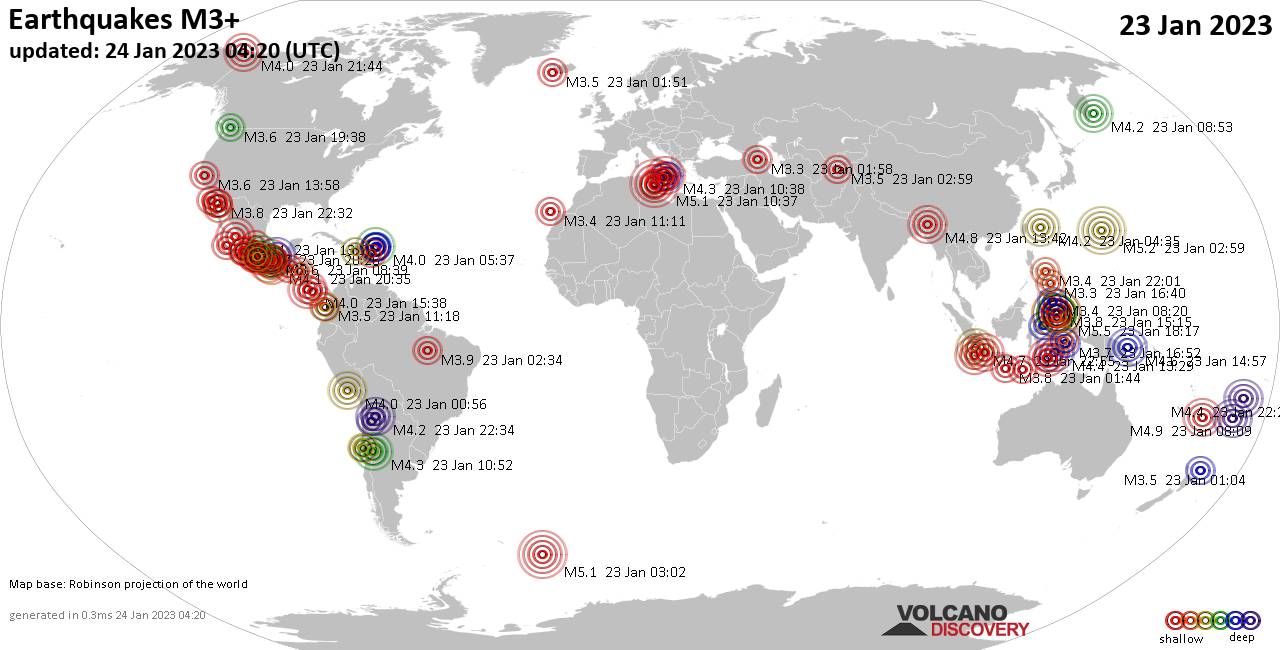