Can one feel a small magnitude 2.5 earthquake? 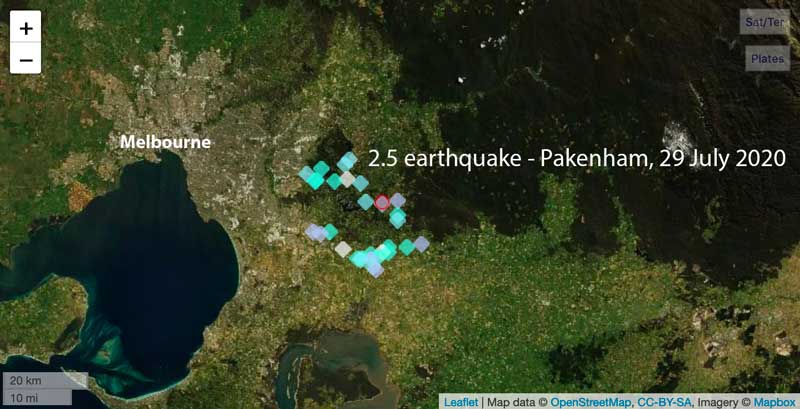 Location of the mag 2.2 earthquake below Pakenham on 29 July 2020 and user-report locations. Light blue and green rectangles indicate very light to light shaking felt of the quake.
Normally, earthquakes below magnitude 3 or so are rarely felt. However, smaller quakes from magnitude 2.0 can be felt by people if the quake is shallow (few kilometers only) and if people are very close to its epicenter and not disturbed by ambient factors such as noise, wind, vibrations of engines, traffic etc.
A perfect example was a small magnitude 2.5 quake, which occurred 7.2 km below Pakenham, 20 km east of Melbourne (VIC, Australia), on 29 July 2020. One user reported: "There was loud rumbling like a truck outside for a few seconds, then a bang and I felt the the earth jolt, as though something had hit the hill we live on." Another user reported that "it sounded like a train very close to the house".
Many other people in the same area also felt it, most in the form of weak underground rumbling and very light vibration.
To feel earthquakes of such small magnitude is rather rare. The energy it released corresponds to the detonation of about 70 kg of TNT explosives.
See all the feedback from this quake here!
Try our free app!