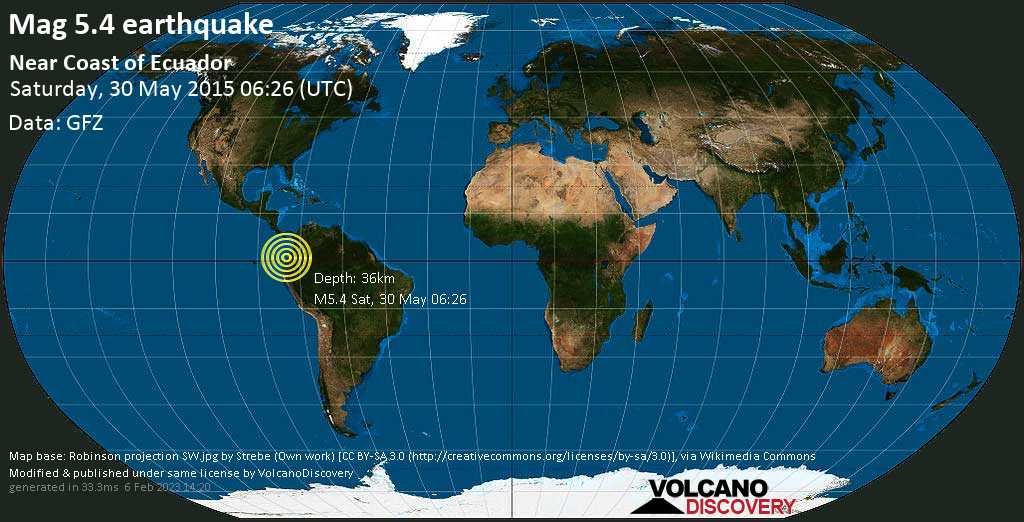 Info: The more agencies report about the same quake and post similar data, the more confidence you can have in the data. It takes normally up to a few hours until earthquake parameters are calculated with near-optimum precision.
Most recent quakes Top 20 quakes past 24 hrs Quakes in Colombia

User reports estimate the perceived ground shaking intensity according to the MMI (Modified Mercalli Intensity) scale.
Contribute:
Leave a comment if you find a particular report interesting or want to add to it.
Flag as inappropriate.
Mark as helpful or interesting.
Send your own user report!
Otavalo, Ecuador / Weak shaking (MMI III) : My wife woke me up and I was having a dream about an earthquake. didn't last long, but we both felt it.
Atacames, Ecuador (68.9 km SW of epicenter) [Map] / Moderate shaking (MMI V)
Atuntaqui (162.5 km SE of epicenter) [Map] / not felt : Did not feel this quake but...about 10 pm last night both our dogs started howling and then neighborhood dogs as well. Last time they did this was last year when there was an earthquake in Quito that we felt here as well.
MOMPICHE / Very weak shaking (MMI II)
quito / Light shaking (MMI IV)
Quito (Ecuador, 183 km SE of epicenter) : Birds started chattering (reported through EMSC)
Quito (Ecuador, 183 km SE of epicenter) : I started with windows cracking and blinds moving. Felt like waves and became stronger. Did not last long but being on 13th floor and sleeping it gave us a scare. (reported through EMSC)
Puerto Quito (Ecuador, 119 km S of epicenter) : we were sleeping when it occurred (reported through EMSC)
Try our free app!

More info
Based on its magnitude, the fault that was active during the quake ruptured along a surface of approx. 25 km2 (=10 sqare miles) as a first-order estimate. The length of the rupture zone thus was probably around 9 km (5 mi).
Aftershocks typically occur during the days and weeks following the quake at or near the same fault, at distances of up to approx. two times the length of the rupture zone.
The often broadly linear arrangement of aftershock epicenters encompasses the rupture zone of the main shock (check on the map below to verify).
Recorded aftershocks, latest first (0 quakes):
So far, no aftershocks have been registered.
to top

Click here to search our database for earlier earthquakes in the same area since 1900!
Most recent quakes Top 20 quakes past 24 hrs Quakes in Colombia
Try our free app!