This quake was likely an aftershock of the 7.1 quake Near Coast of Peru 14 January 09:18 UTC, which had occurred 2 weeks earlier. 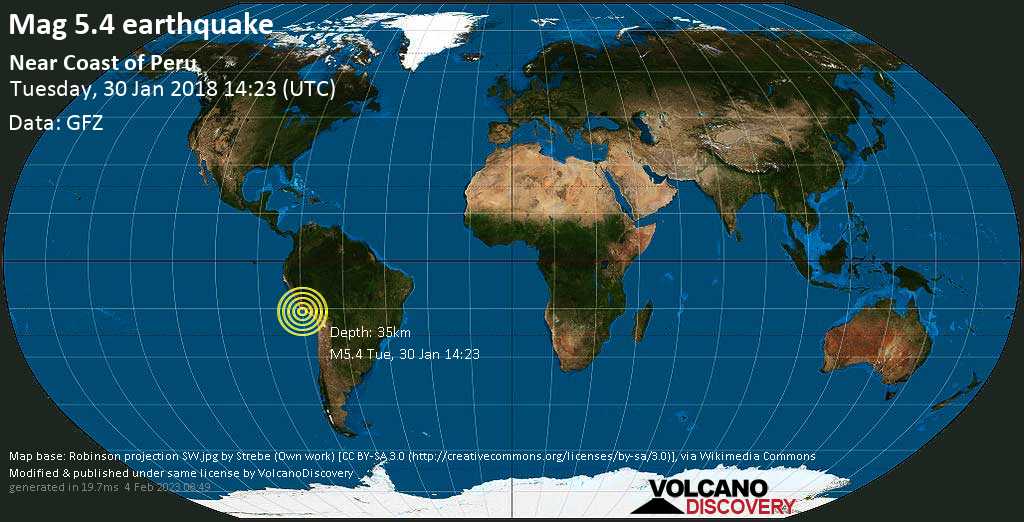 User reports estimate the perceived ground shaking intensity according to the MMI (Modified Mercalli Intensity) scale.
Contribute:
Leave a comment if you find a particular report interesting or want to add to it.
Flag as inappropriate.
Mark as helpful or interesting.
Send your own user report!
Arequipa Bustamante y Rivero (332.5 km ESE of epicenter) [Map] / Very weak shaking (MMI II) (reported through our app)
Try our free app!

Volcanoes in the Solar System: The Earth is not the only place with volcanic activity. Active volcanism also occurs at at least 3 other bodies in our Solar System.
Molucca
3-19 May 2020

Volcanoes & Spices: This 17-days adventurous expedition is one of our most exciting volcano tours! Visit Halmahera, North Sulawesi and the Sangihe Islands with some of Indonesia's most active volcanoes, including Dukono, Ibu, Lokon, Soputan and Karangetang.
Kamchatka

Photos from Kamchatka: Kamchatka in Russia's far east is one of world's remotest regions and has an almost unparalleled density of active volcanoes. Look at photos taken during our expeditions from this wonderful corner of the world!
Volcano Calendar 2020