This quake was likely an aftershock of the 6.7 quake Ionian Sea 25 October 22:54 UTC, which had occurred 1 hour and 19 minutes earlier. 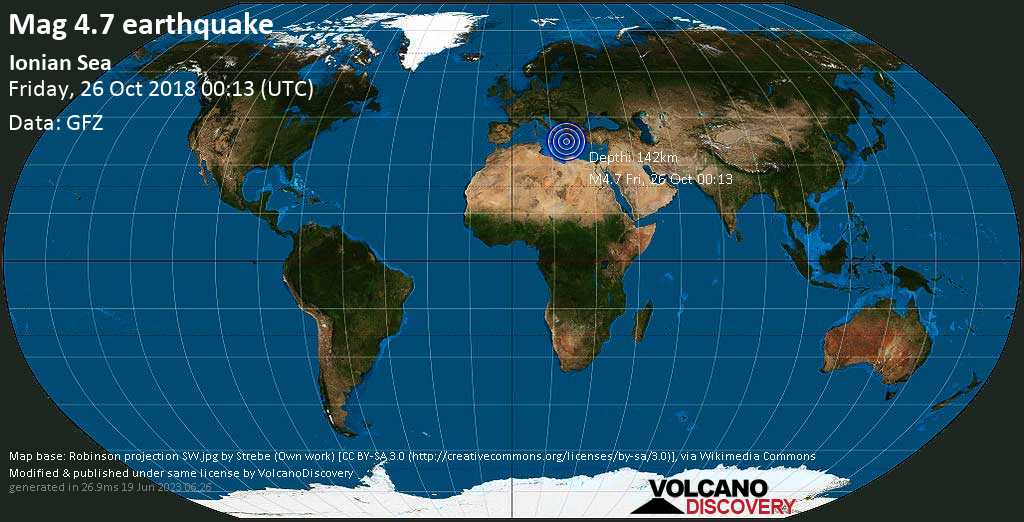 User reports estimate the perceived ground shaking intensity according to the MMI (Modified Mercalli Intensity) scale.
Contribute:
Leave a comment if you find a particular report interesting or want to add to it.
Flag as inappropriate.
Mark as helpful or interesting.
Send your own user report!
Kafou/Chrani / Light shaking (MMI IV) : Only realized moving lamps and a moving mirror in the bathroom where I was in that moment
athens / Weak shaking (MMI III)
kyllini, peloponnes / Light shaking (MMI IV) : It doesn't stop right now. Earth is shaking again and again even while I'm writing this. Horrible experience.
85.5 km N of epicenter [Map] / Weak shaking (MMI III) (reported through our app)
Try our free app!

Volcano Calendars: We have published several volcano calendars over the years: usually, we use photos taken by us or our participants during our recent volcano tours and expeditions. A perfect gift if you're a fan of volcanoes!
Vanuatu

Vanuatu Volcano Tours: One of the most exciting volcano travel destinations in the world! On our adventurous expeditions, you will get close to active lava lakes on Ambrym Island and the spectacular fireworks of Yasur volcano on Tanna Island.
Santorini Geology