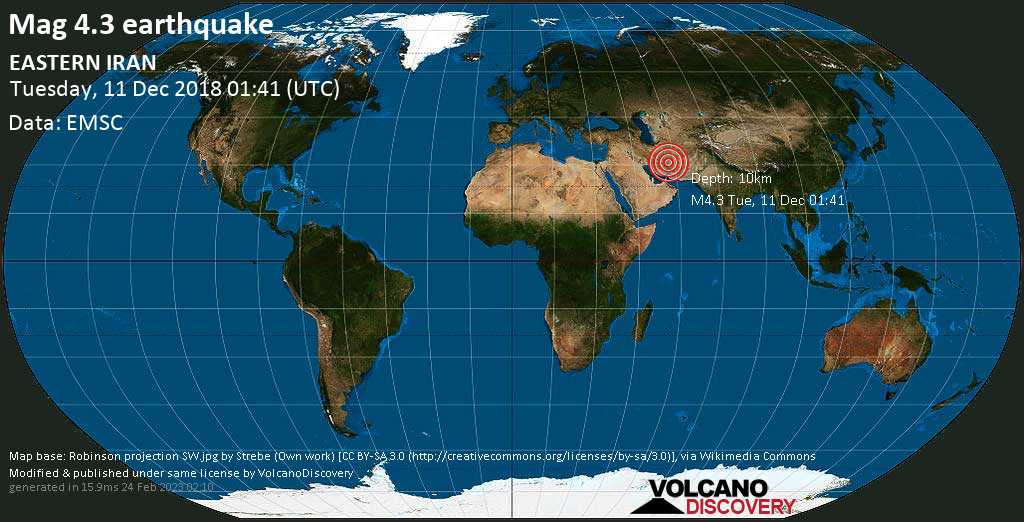 Info: The more agencies report about the same quake and post similar data, the more confidence you can have in the data. It takes normally up to a few hours until earthquake parameters are calculated with near-optimum precision.
Most recent quakes Top 20 quakes past 24 hrs Quakes in Iran

User reports estimate the perceived ground shaking intensity according to the MMI (Modified Mercalli Intensity) scale.
Contribute:
Leave a comment if you find a particular report interesting or want to add to it.
Flag as inappropriate.
Mark as helpful or interesting.
Send your own user report!
Kerman / Moderate shaking (MMI V)
99.3 km E of epicenter [Map] / Violent shaking (MMI IX)
kerman / Moderate shaking (MMI V)
(Iran (Islamic Republic of), 378 km S of epicenter) : خیلی خفیف بندرعباس احساس شد (reported through EMSC)
(Iran (Islamic Republic of), 98 km NW of epicenter) : I live in ZARAND almost 75 km of kerman, Zarand on the biggest earthquake lines and usually when earthquakes happens around us we heard a "hummm" or voice of waves or something like that! (reported through EMSC)
(Iran (Islamic Republic of), 52 km SW of epicenter) : As ever, jolts for few seconds, woke us up (reported through EMSC)
Try our free app!