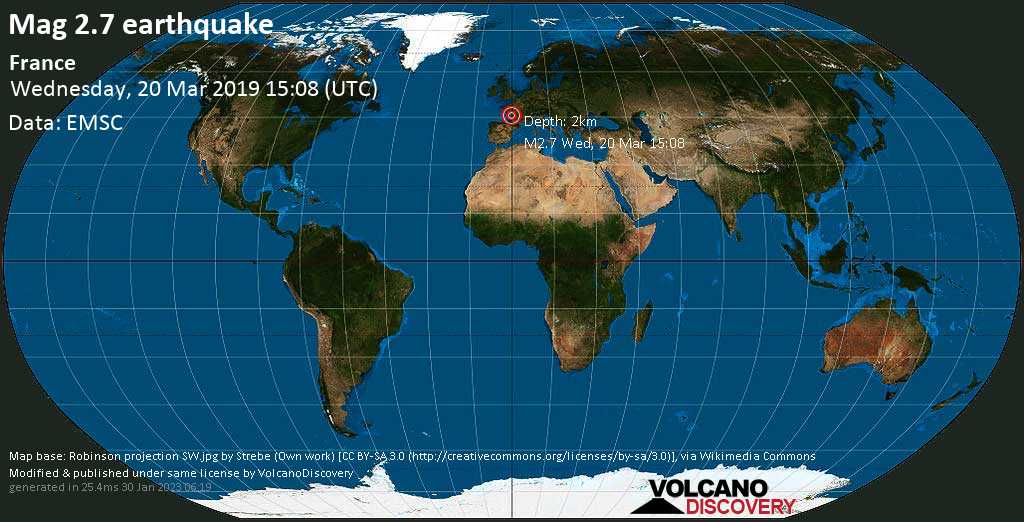 User reports estimate the perceived ground shaking intensity according to the MMI (Modified Mercalli Intensity) scale.
At magnitude 2.7, this quake might have been felt very close to the epicenter and under calm conditions.
Contribute:
Leave a comment if you find a particular report interesting or want to add to it.
Flag as inappropriate.
Mark as helpful or interesting.
Send your own user report!
210.3 km S of epicenter [Map] / Very weak shaking (MMI II) : A sound never herd before like a scraping chair
Villefagnan 16240 / not felt
Saint-Sulpice d’Excideuil / Light shaking (MMI IV) : I was awoken from a nap. I thought it was someone running vigorously down the adjoining corridor.
Manzac sur Vern 24110 / Light shaking (MMI IV)
Try our free app!

Click here to search our database for earlier earthquakes in the same area since 1900!
Most recent quakes Top 20 quakes past 24 hrs Quakes in France
Try our free app!

Climbing Stromboli volcano: Stromboli provides one of the most remarkable opportunities to watch volcanic eruptions from close: a natural ridge located 150 m above the active vents. A classic and all-time favorite tour by anyone interested in seeing active volcanoes!
Destinations