This quake was likely an aftershock of the 6.8 quake 397 km southeast of Ambon City, Maluku, Indonesia, 6 May 13:53 UTC, which had occurred 3 days earlier. 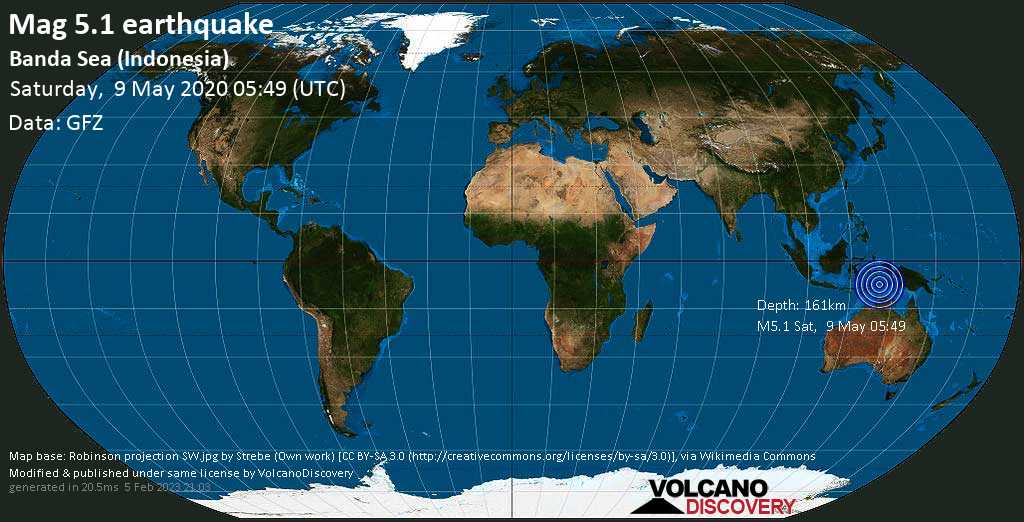 User reports estimate the perceived ground shaking intensity according to the MMI (Modified Mercalli Intensity) scale.
Contribute:
Leave a comment if you find a particular report interesting or want to add to it.
Flag as inappropriate.
Mark as helpful or interesting.
Send your own user report!
Katherine north (862.8 km SSE of epicenter) [Map] / Light shaking (MMI IV) : sitting outside on solid ground, chair shook,all the birds freaked & flew off, cat was alarmed and neighborhood dogs barked, this all happened at exactly the same time, 6.03pm.Felt like an explosion. My partner inside felt nothing.
605.7 km SSE of epicenter [Map] / Light shaking (MMI IV) : Laying down on bed, on 3 hard tremors (like harder than the one that occurred 30hr ago) but eased right off. My TV was shaking
Darwin / Very weak shaking (MMI II)
Sittensen / not felt : Woke Up before Bell rangs.
Try our free app!

Largest 20 earthquakes past 24 hrs: Our continuously updated worldwide map and list of the most recent largest earthquakes in the world during the past 24 hours.
You can also find top 20 lists for given past days / months / years from the archive.
Kamchatka 2018