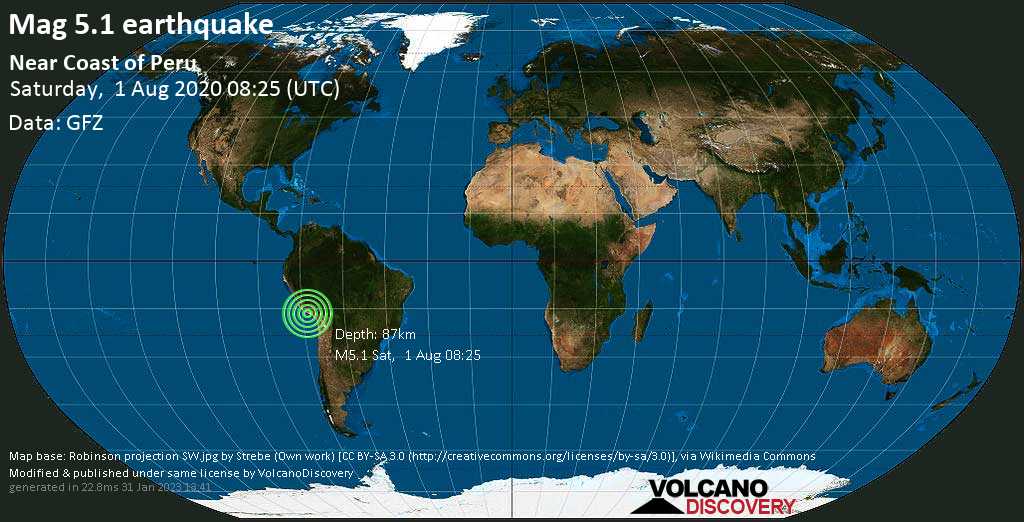 1 Aug 08:32 UTC: First to report: GFZ after 7 minutes.
Aug 1 09:02: Magnitude recalculated from 4.9 to 5.1.
Update Sat, 1 Aug 2020, 09:29
Magnitude 5.1 quake hits Arequipa Province in southern Peru
Another magnitude 5 earthquake hit southern Peru today at 08:25 UTC (03:35 local time). Detected at 87 km depth, it's epicenter was located approx. 100 km west of the region capital of Arequipa and in a mostly deserted area 50 km from the Pacific coast.
Many people in Arequipa and other towns in the area were woken up by the quake which was felt as an approx. 20 second-long mild shaking.
Due to its depth and distance from populated areas, no significant damage is expected from this quake.
A similar earthquake of magnitude 5.1 had occurred in southern Peru 22 hours earlier.
Download the Volcanoes & Earthquakes app to get one of the fastest seismic alerts online:
Android | IOS