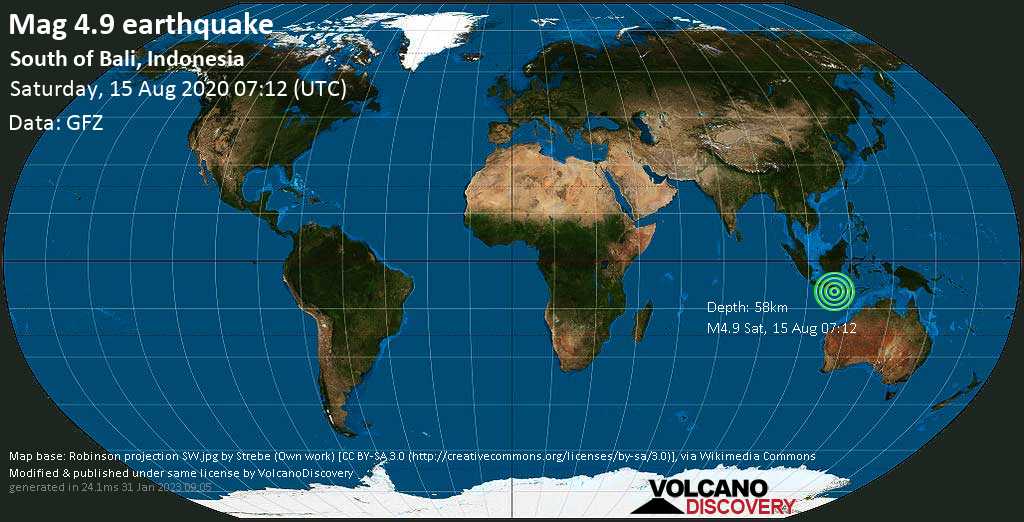 Tectonic setting of Java and Bali showing the NNE movement of the Australian Plate (image: USGS)
A light to moderate magnitude 4.9 quake occurred at approx. 58 km depth and 150 km south of East Java or 200 km SW of Bali's capital Denpasar. It was felt as light shaking by many people in the southern coastal areas of East Java and Bali.
There is no tsunami threat and no damage should be expected due to its depth and distance.
According to some people who sent in reports of their experience, the quake was felt during between 5-30 seconds. Some first heard a rumbling sound before actual shaking was perceived.
The quake is a result of the dominant tectonic setting of the area: the NNE-moving Australian plate is sliding (subducting) under the continental Sunda Plate, on which Java and Bali sit. In this area, the Australian plate moves at 71 mm per year, but this movement is not continuous, but in small and larger steps when earthquakes occur, releasing accumulated stress at the boundary between the top of the sinking Australian plate and the upper mantle beneath the Sunda plate, into which the former is sinking. Today's quake was such an event: Australia moved a tiny bit closer to Bali, by a millimeter or so. Over the next few millions of years, the distance will continue to shrink considerably.
Download the Volcanoes & Earthquakes app to get one of the fastest seismic alerts online:
Android | IOS

User reports for this quake (34)

Worldwide earthquake activity level: What is the level of global earthquake activity today compared to the past? Find out with our graph showing the current and past Global Seismic Activity Level indicator!
Photo of the Week
Week 49: Mon 30 Nov - Sun 6 Dec, 2020

Vote for your favorite or submit photos
Volcano Videos