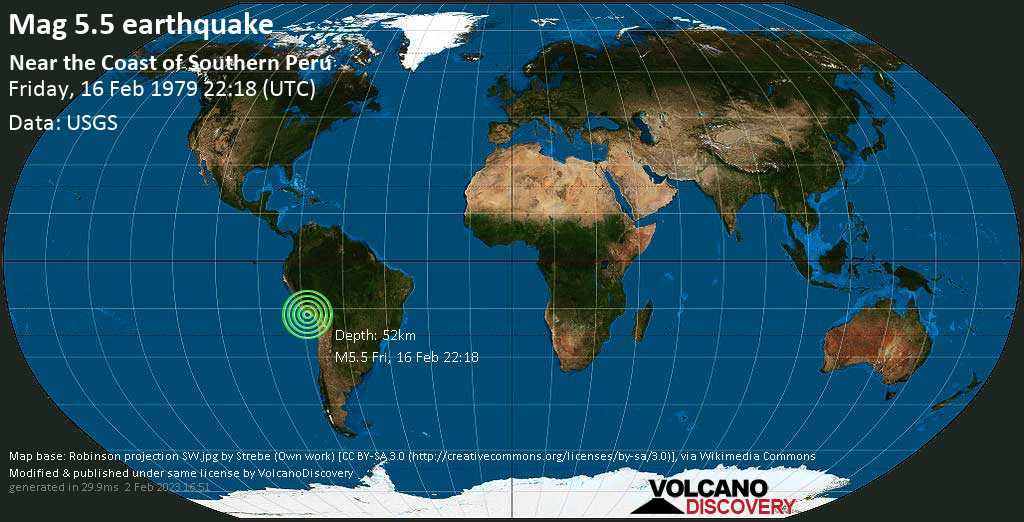 Aftershocks of the 5.5 quake Near the Coast of Southern Peru 16 February 22:18 UTC

More info
Based on its magnitude, the fault that was active during the quake ruptured along a surface of approx. 32 km2 (=12 sqare miles) as a first-order estimate. The length of the rupture zone thus was probably around 10 km (6 mi).
Aftershocks typically occur during the days and weeks following the quake at or near the same fault, at distances of up to approx. two times the length of the rupture zone.
The often broadly linear arrangement of aftershock epicenters encompasses the rupture zone of the main shock (check on the map below to verify).
Recorded aftershocks, latest first (5 quakes):

Pearl of the Aegean: Santorini is one of the most beautiful islands in the world. Discover its fascinating natural and cultural history on a relaxed walking study tour with us.
Anatomy of a vulcanian explosion

A violent vulcanian-type explosion from Anak Krakatau in pictures step by step.
Testimonials

Feedback from our guests:
"Your Vanuatu Volcano tour was a fantastic mix of hard core volcanoes and cultural Vanuatu life... " -
read what customers said about us!
Volcanic Quakes