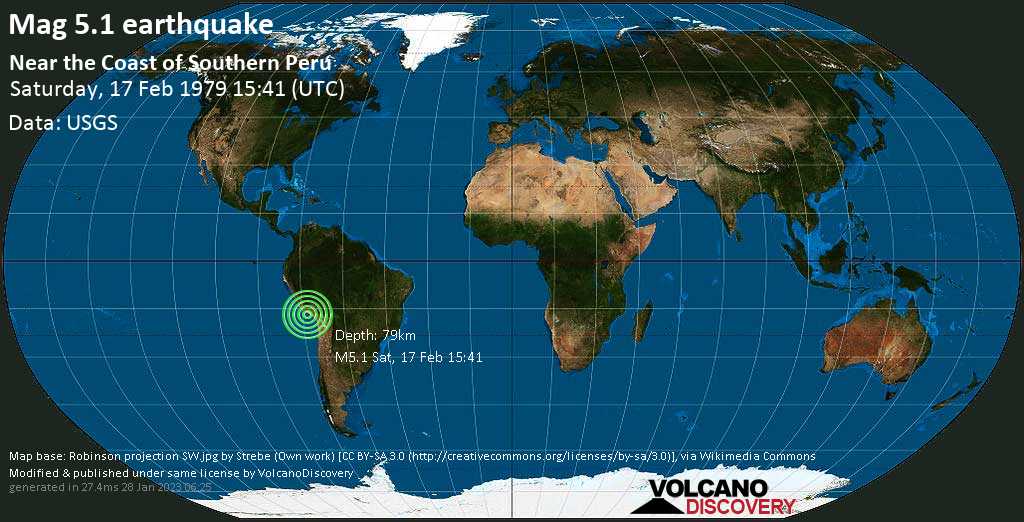 Aftershocks of the 5.1 quake Near the Coast of Southern Peru 17 February 15:41 UTC

More info
Based on its magnitude, the fault that was active during the quake ruptured along a surface of approx. 13 km2 (=5 sqare miles) as a first-order estimate. The length of the rupture zone thus was probably around 6 km (4 mi).
Aftershocks typically occur during the days and weeks following the quake at or near the same fault, at distances of up to approx. two times the length of the rupture zone.
The often broadly linear arrangement of aftershock epicenters encompasses the rupture zone of the main shock (check on the map below to verify).
Recorded aftershocks, latest first (4 quakes):

Photos from Kamchatka: Kamchatka in Russia's far east is one of world's remotest regions and has an almost unparalleled density of active volcanoes. Look at photos taken during our expeditions from this wonderful corner of the world!
Igneous rocks

Igneous or magmatic rocks: The most primitive rock type forms when magma (molten rock) solidifies - either inside the earth (plutonic rocks) or during volcanic eruptions (volcanic rocks). A short overview.
Nyamuragira

Nyamuragira volcano photos: Africa's version of Mauna Loa, Nyamuragira (or Nyamulagira) is a massive basaltic shield volcano neighboring Nyiragongo. It is one of the most active volcanoes in the world and has voluminous eruptions every few years.
VAAC