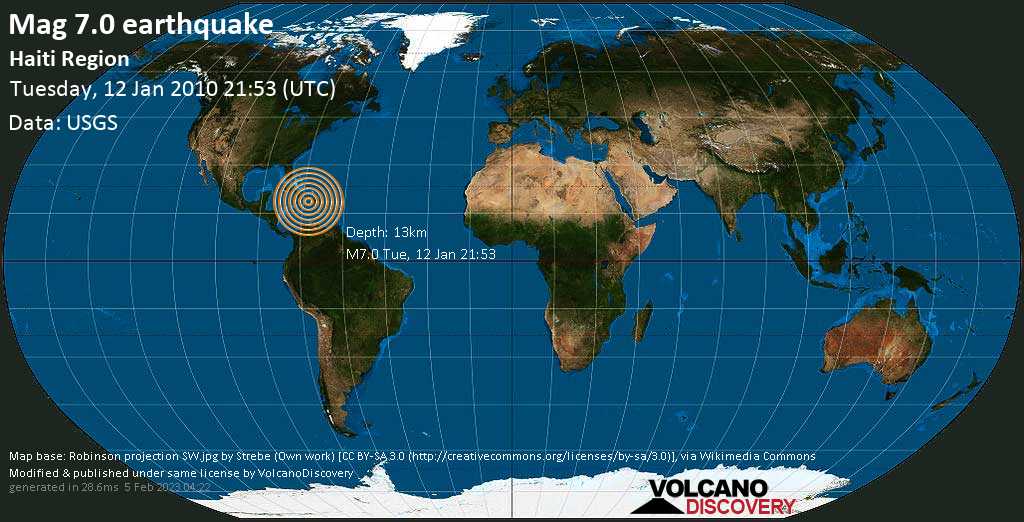 The epicenter of the earthquake was near the town of Léogâne, Ouest department, approximately 25 km (16 mi) west of the capital Port-au-Prince.
The quake affected about 3 million people, damaged or destroyed an estimated 250,000 houses and 30,000 commercial buildings. It severely affected the country's economy already in great difficulty, and which has not fully recovered during the years after the quake.
Download the Volcanoes & Earthquakes app and get one of the fastest seismic alerts online:
Android | iOS

Info: The more agencies report about the same quake and post similar data, the more confidence you can have in the data. It takes normally up to a few hours until earthquake parameters are calculated with near-optimum precision.
Note: for quakes of 2012 and earlier, our database often contains only records from USGS.
Most recent quakes Top 20 past 24 hrs Quakes in Dominican Republic

More info
Based on its magnitude, the fault that was active during the quake ruptured along a surface of approx. 1000 km2 (=386 sqare miles) as a first-order estimate. The length of the rupture zone thus was probably around 55 km (34 mi).
Aftershocks typically occur during the weeks, months or even a year following the quake at or near the same fault, at distances of up to approx. two times the length of the rupture zone.
The often broadly linear arrangement of aftershock epicenters encompasses the rupture zone of the main shock (check on the map below to verify).