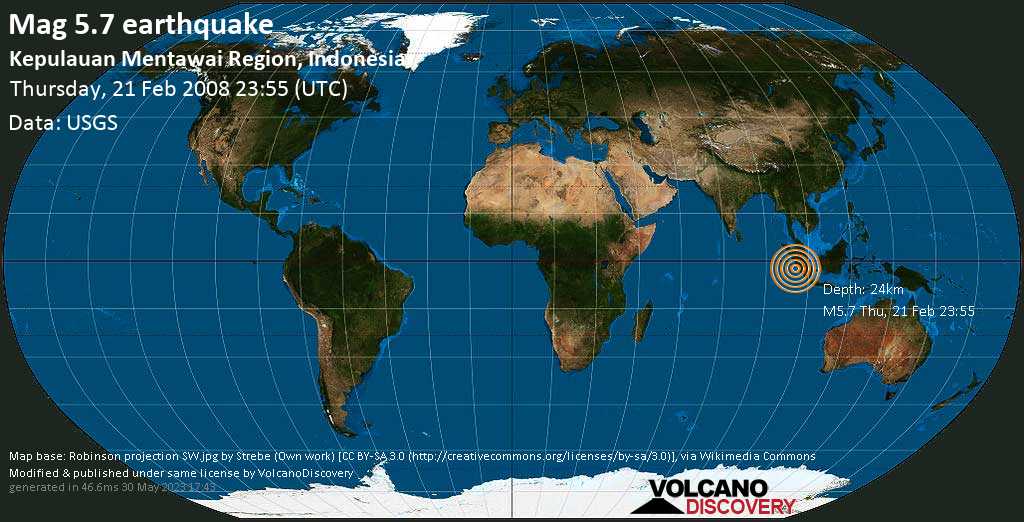 More info
Based on its magnitude, the fault that was active during the quake ruptured along a surface of approx. 50 km2 (=19 sqare miles) as a first-order estimate. The length of the rupture zone thus was probably around 12 km (8 mi).
Aftershocks typically occur during the days and weeks following the quake at or near the same fault, at distances of up to approx. two times the length of the rupture zone.
The often broadly linear arrangement of aftershock epicenters encompasses the rupture zone of the main shock (check on the map below to verify).
Recorded aftershocks, latest first (14 quakes):

Try our new app!: Volcanoes & Earthquakes - our new free App for Android shows the latest earthquakes and active volcanoes on a map and as list, as well as volcano news from all the world. You can filter the data shown in various ways, e.g. by magnitude or age of earthquakes, the distance from your location, the status of volcanoes and so on.
Nyamuragira

Nyamuragira volcano photos: Africa's version of Mauna Loa, Nyamuragira (or Nyamulagira) is a massive basaltic shield volcano neighboring Nyiragongo. It is one of the most active volcanoes in the world and has voluminous eruptions every few years.
IOS App

Volcanoes & Earthquakes: Our popular app is now also available for iPhone and iPad! Get the latest volcano news and earthquakes world-wide - it's free!
Kuril Islands 17-30 July 2020