This quake was likely an aftershock of the 6.2 quake 40 Km S from Andikithira 12 October 13:11 UTC, which had occurred 2 hours and 15 minutes earlier. 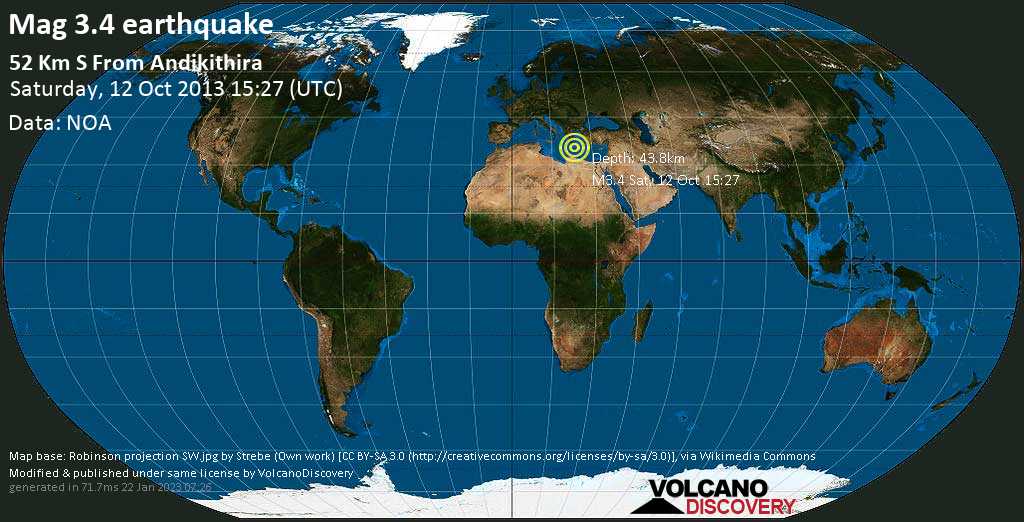 User reports estimate the perceived ground shaking intensity according to the MMI (Modified Mercalli Intensity) scale.
Contribute:
Leave a comment if you find a particular report interesting or want to add to it.
Flag as inappropriate.
Mark as helpful or interesting.
Send your own user report!
Gouves, Crete / Moderate shaking (MMI V) : I sitting at the pool and thought, that someone shake my chair. As i looking around a lot of people on the pool do and thought the same thing.
zamalek cairo (948.3 km SE of epicenter) [Map] / Weak shaking (MMI III)
alexandria (772.9 km SE of epicenter) [Map] / Light shaking (MMI IV)
Vienna / Very weak shaking (MMI II)
Try our free app!

Dukono volcano photos: Dukono on Halmahera in Indonesia has been in permanent activity for years, often producing ash plumes that drift around the northern part of the island and have become normality.
Vanuatu 20 Sep - 5 Oct 2020

Volcanoes & Cultures: The contrast between unspoiled rain-forest, coconut palm beaches, primitive culture and moon-like landscapes surrounding lava-spitting volcanoes could not be bigger: join us on an expedition to the two most active volcanoes of Vanuatu: Ambrym and Yasur.
Volcano Adventure Guide

Excellent information for anyone wishing to visit and enjoy active volcanoes safely. Detailed guidelines to 42 different volcanoes around the world.
Volcanoes and Spices