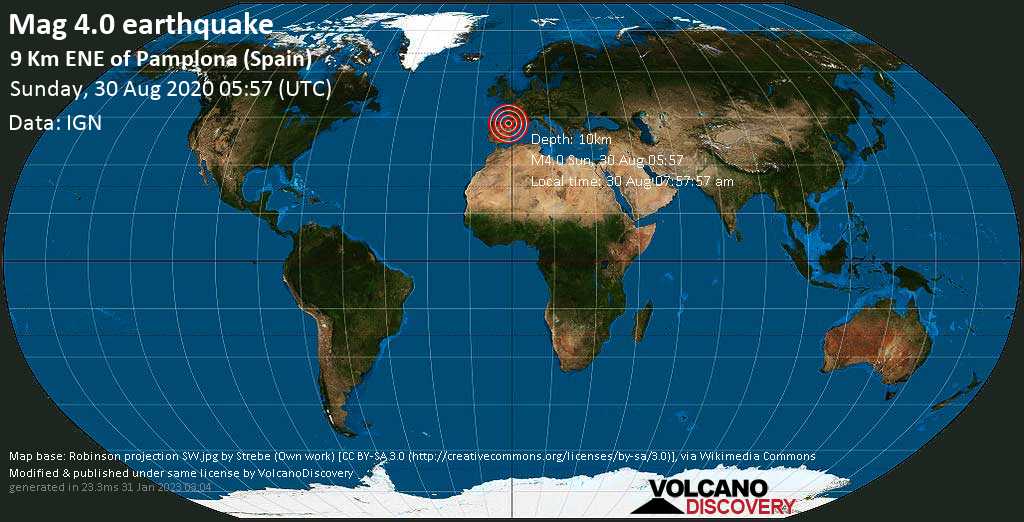 Location of this morning's felt quake near Pamplona, Spain
A light earthquake of magnitude 4 hit this morning at 07:57 local time approx. 10 km NE near the Spanish town of Pamplona (pop. 198.000) in the southern foothills of the Pyrenees.
Due to its shallow depth and vicinity to habitations, the tremor was felt by many people, most of whom were still in their beds.
The quake's shaking was mostly perceived as a short and light vibration that lasted less than 5 seconds. One user reported that the vibration induced by the quake made glasses "sing", i.e. presumably as the frequency of the quake's vibration hit the resonance frequency of glasses.
No damage should have occurred from this quake.
Download the Volcanoes & Earthquakes app to get one of the fastest seismic alerts online:
Android | IOS

What clients have said: Browse through feedback about our tours from customers, read what they have said about us!
Bromo

Bromo volcano photos: Bromo is one of Indonesia's most visited volcanoes. It is the most active vent inside the huge Tengger caldera and erupts every few years.
Santorini Geology