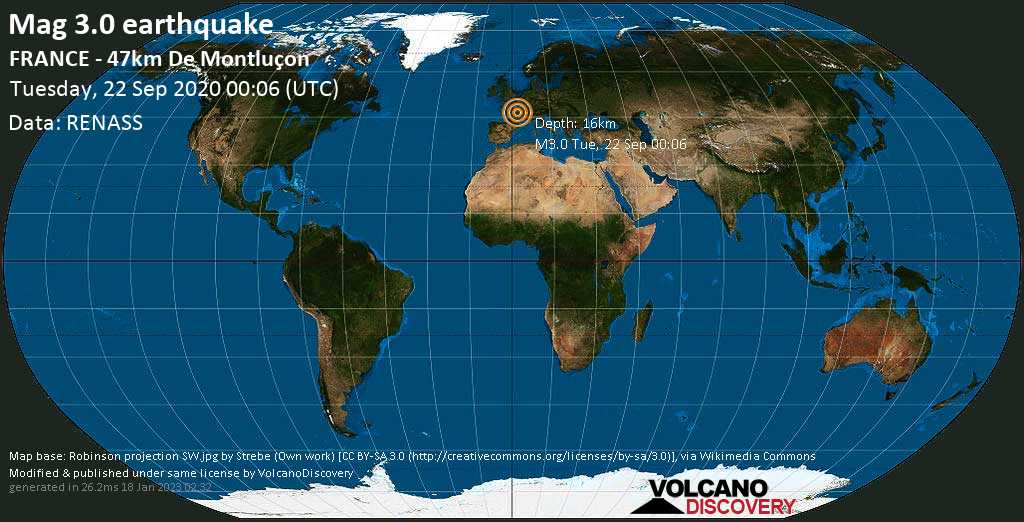 User reports estimate the perceived ground shaking intensity according to the MMI (Modified Mercalli Intensity) scale.
Contribute:
Leave a comment if you find a particular report interesting or want to add to it.
Flag as inappropriate.
Mark as helpful or interesting.
Send your own user report!
Lieu dit Le temple, le bourg d,hem 23220 / Weak shaking (MMI III) : Je ne dormais pas ,j,ai d'abord entendu un bruit non identifié et j,ai pensé que cela venait de l'extérieur la fenêtre étant ouverte immédiatement suivi d,un gros craquement puis de vibrations semblables à celles que pourrai produire le passage d'un gros camion,cela pendant 5 ou 6 secondes | One user found this interesting.
Aubepierre, 23160 Azerables / not felt : I woke and the time was correct for your report, hearing a loud bang. I thought also there was a light outside as if a vehicle had shone headlights. My car was parked outside and the alarm was not triggered. No sign of anyone outside
Champagne, Gouzon / Weak shaking (MMI III) / rattling, vibrating / 2-5 s : I was awoken last night by a sound and vibrations of a truck passing. It lasted for a few seconds. This morning checking outside there was dislodged rendering from the barn on the ground.
Try our free app!

Tours to erupting volcanoes: From time to time, we organize special tours to see volcanoes in eruption. These are often announced only few days or weeks in advance. Find out more!
Kamchatka 2018

Tour photos Sep 2018: Impressions from our Tour to Kamchakta during Sep 2018: northern group of volcanoes, Karymsky, and the southern plateau with Mutnovsky and Gorely.
Accretionary lapilli

Small spherical balls of volcanic ash that form from a wet nucleus falling through a volcanic ash cloud.
Colima