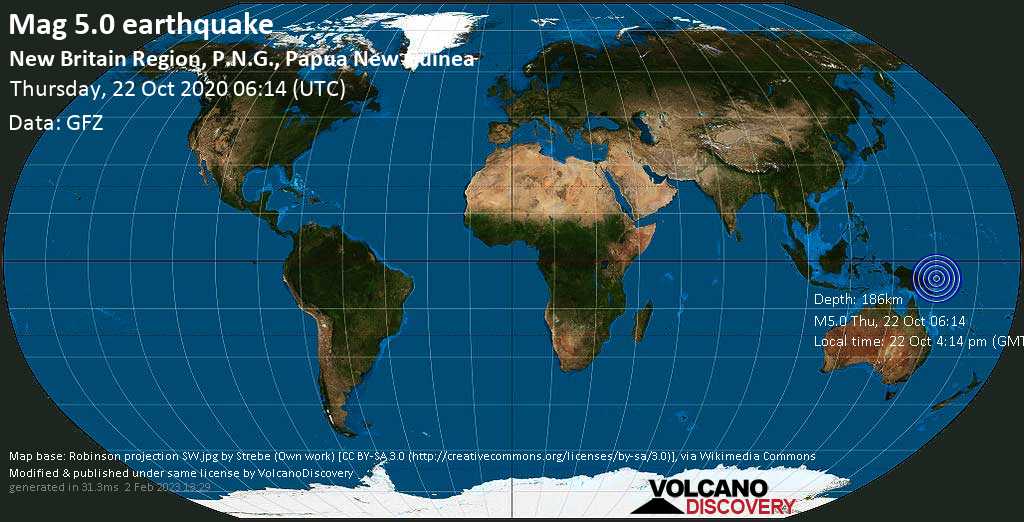 22 Oct 06:23 UTC: First to report: GFZ after 9 minutes.
Quake Data | User Reports | Aftershocks | Earlier quakes in same area | Quakes in Papua New Guinea
Update Thu, 22 Oct 2020, 06:51
Moderate, but deep magnitude 5.0 quake hits 208 km N of Finschhafen, Papua New Guinea
A magnitude 5.0 earthquake was reported 38 minutes ago by the German Research Centre for Geosciences in Potsdam (GFZ), considered one of the key international agencies that monitor seismic activity worldwide. The earthquake occurred at a relatively large depth of 186 km (116 miles) beneath the epicenter in the afternoon on 22 October at 4.14 pm local time. Magnitude and other quake parameters can still change within the next hours as the agency continues to process seismic data.
Our monitoring service at VolcanoDiscovery also identified a second report from the United States Geological Survey (USGS) which listed the quake at magnitude 5.1. Other agencies reporting the same quake include GeoAu (magnitude 5.4), Indonesia's Meteorology, Climatology, and Geophysical Agency (BMKG) (magnitude 4.9), and European-Mediterranean Seismological Centre (EMSC) (magnitude 5.1).
Based on the preliminary seismic data, the quake should not have caused any significant damage, but was probably felt by many people as light vibration in the area of the epicenter.
Towns and cities near the epicenter where the quake might have been felt, based on preliminary calculations, include Kandrian (pop. 1000) at a distance of 79 km (49 miles) with weak shaking, Kimbe (pop. 18,800) at a distance of 82 km (51 miles) with weak shaking, Finschhafen (pop. 1,100) at a distance of 208 km (129 miles) with very weak shaking.
This story will be updated soon by VolcanoDiscovery. If you’re in the area, please send us your experience through our reporting mechanism. This will help us provide more first-hand updates to anyone around the globe who wants to know more about this quake.
Download the Volcanoes & Earthquakes app to get one of the fastest seismic alerts online:
Android | IOS

User reports estimate the perceived ground shaking intensity according to the MMI (Modified Mercalli Intensity) scale.
Contribute:
Leave a comment if you find a particular report interesting or want to add to it.
Flag as inappropriate.
Mark as helpful or interesting.
Send your own user report!
Albion Park / Moderate shaking (MMI V) : sitting outside our dog got scared and the noise and the shaking of ground
Try our free app!

Photos from Germany: Germany has a large number of volcanoes - most of them extinct, but the Eifel volcanic field is still potentially active.
Ambrym