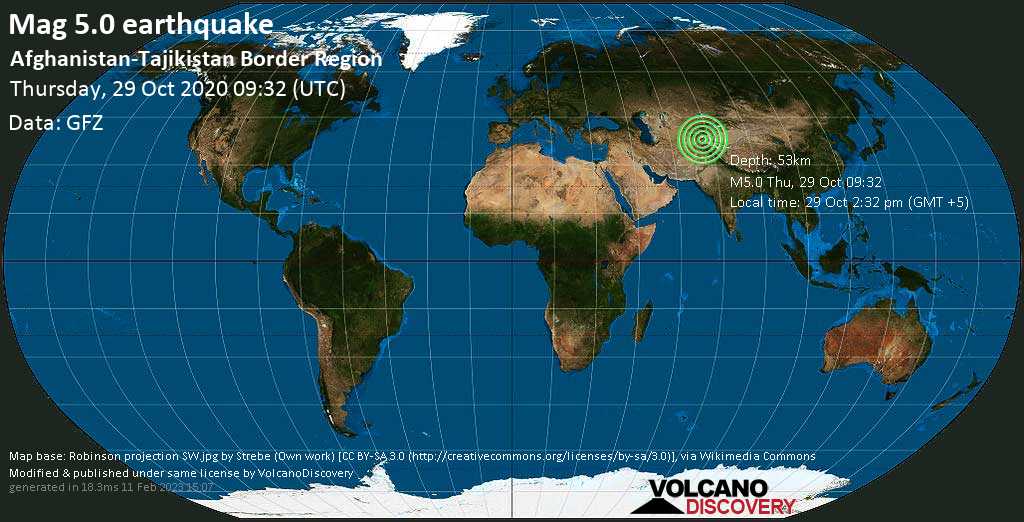 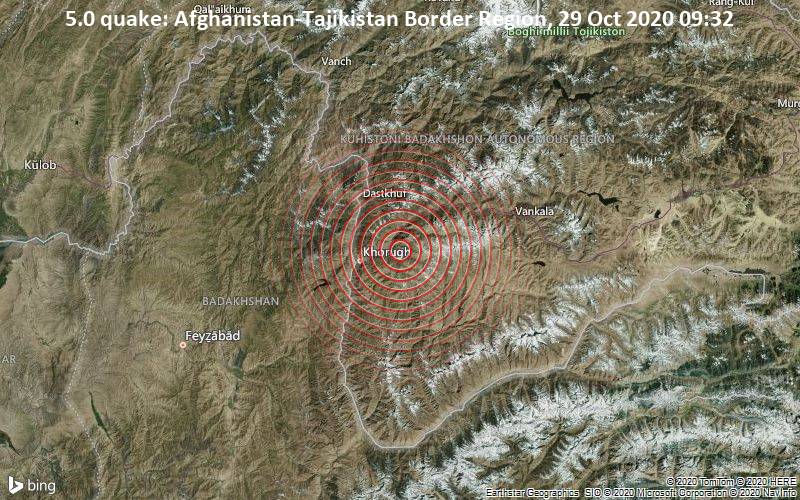 5.0 quake: Afghanistan-Tajikistan Border Region, 29 Oct 2020 09:32
Just 24 minutes ago, a 5.0-magnitude earthquake struck near the town of Khorugh, Tajikistan. The tremor was recorded early afternoon on Thursday 29 October 2020 at 2.32 pm local time, at a shallow depth of 10 km below the surface.
The event was filed by the German Research Centre for Geosciences in Potsdam (GFZ), the first seismological agency to report it.
A second report was later issued by Geoscience Australia (GeoAu) agency, which listed it as a magnitude 5.1 earthquake. Other agencies reporting the same quake include United States Geological Survey (USGS) at magnitude 4.9, and European-Mediterranean Seismological Centre (EMSC) at magnitude 4.9.
Generally quakes of this magnitude are recorded by more than one agency and the results can vary, with subsequent reports that come in after the first one often showing more accuracy.
Based on the preliminary seismic data, the quake should have been widely felt by almost everyone in the area of the epicenter. It might have caused light to moderate damage.
Towns or cities near the epicenter that are likely to be affected include Khorugh (pop. 30,000) at a distance of 20 km with light shaking, Khandūd (pop. 5,500) at a distance of 81 km with weak shaking, Fayzabad (pop. 44,400) at a distance of 115 km with weak shaking, and Kŭlob (pop. 78,800) at a distance of 180 km with weak shaking.
This story will be updated soon by VolcanoDiscovery. If you’re in the area, please send us your experience through our reporting mechanism. This will help us provide more first-hand updates to anyone around the globe who wants to know more about this quake.
Download the Volcanoes & Earthquakes app to get one of the fastest seismic alerts online:
Android | IOS

Vote for your favorite or submit photos
Continental rifts

Divergent plate boundaries on continents: Learn about the process of breaking up continents along continental rift zones.
Armenia

Photos from Armenia: Armenia is a very photogenic country with a large variety of landscapes showing some very spectacular geology, century-old monasteries and castles, and much more.
World Volcano Tour