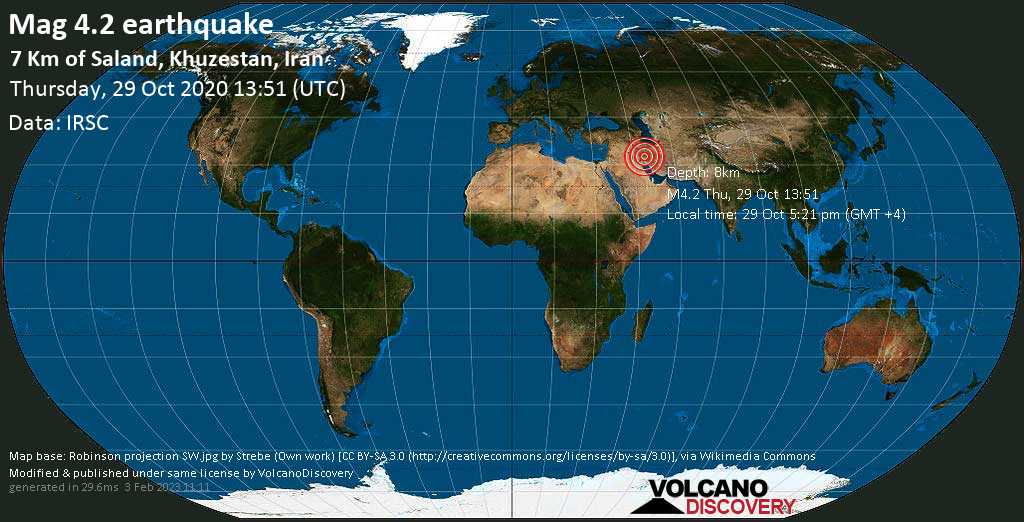 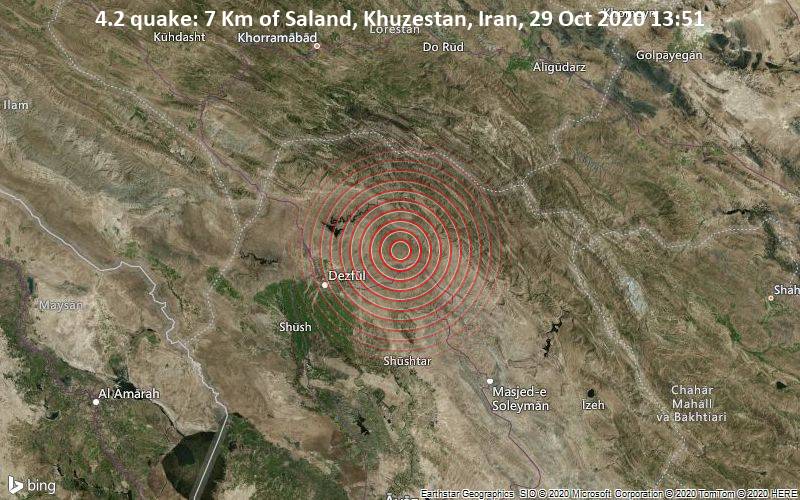 4.2 quake: 7 Km of Saland, Khuzestan, Iran, 29 Oct 2020 13:51
A magnitude 4.2 earthquake was reported 1 hour and 19 minutes ago by the Iranian Seismological Center (IRSC), considered the main national agency that monitors seismic activity in this part of the world. The earthquake occurred at a very shallow depth of 8 km beneath the epicenter in the afternoon on Thursday 29 October 2020 at 5.51 pm local time. Magnitude and other quake parameters can still change in the coming hours as the agency continues to process seismic data.
Our monitoring service at VolcanoDiscovery identified a second report from the European-Mediterranean Seismological Centre (EMSC) which listed the quake at magnitude 4.1.
Based on the preliminary seismic data, the quake should not have caused any significant damage, but was probably felt by many people as light vibration in the area of the epicenter.
Towns or cities near the epicenter where the quake might have been felt, based on preliminary calculations, include Shahrak-e Kūlūrī (pop. 1,900) at a distance of 39 km with weak shaking, Shūshtar (pop. 77,500) at a distance of 56 km with weak shaking, Shūsh (pop. 52,300) at a distance of 66 km with weak shaking, and Masjed Soleymān (pop. 111,500) at a distance of 83 km with very weak shaking.
Download the Volcanoes & Earthquakes app to get one of the fastest seismic alerts online:
Android | IOS

Earthquake Archive: Look up any earthquake anywhere from 2010
Kamchatka

Photos from Kamchatka: Kamchatka in Russia's far east is one of world's remotest regions and has an almost unparalleled density of active volcanoes. Look at photos taken during our expeditions from this wonderful corner of the world!
Geology dictionary