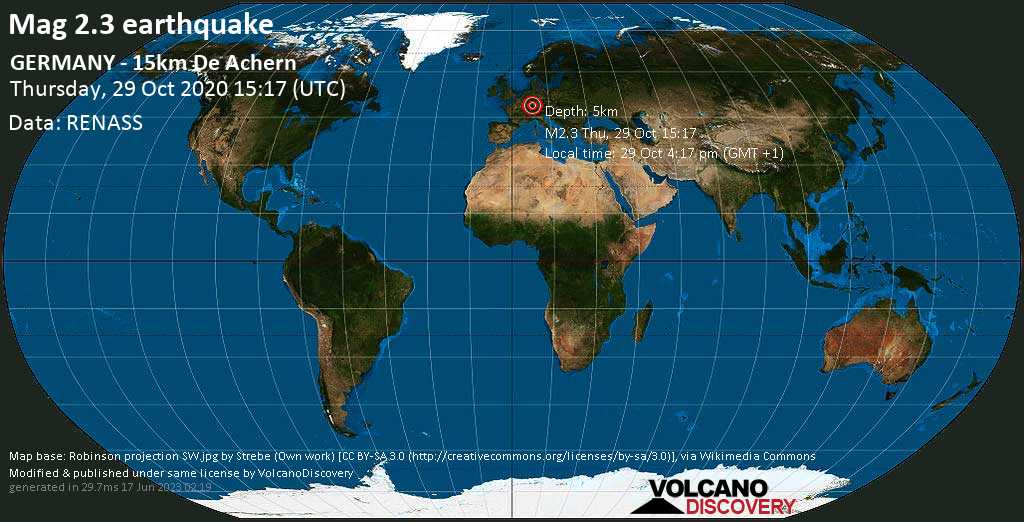 User reports estimate the perceived ground shaking intensity according to the MMI (Modified Mercalli Intensity) scale.
At magnitude 2.3, this quake was probably too small to be felt by humans, but it could be recorded instrumentally.
Contribute:
Leave a comment if you find a particular report interesting or want to add to it.
Flag as inappropriate.
Mark as helpful or interesting.
Send your own user report!
Duisburg (340 km NNW of epicenter) [Map] / Very weak shaking (MMI II) / rattling, vibrating / 5-10 s
Try our free app!

Click here to search our database for earlier earthquakes in the same area since 1900!
Most recent quakes Top 20 quakes past 24 hrs Quakes in Germany
Try our free app!

Land of Colors: We still have spots free on the tours to Kamchata's volcanoes in Aug & Sep 2020! Both tours will be accompanied by a volcanologist from our team. A country full of colors and adventures is waiting for you!
Volcanic Quakes

Earthquakes near Volcanoes: Our world-wide map continuously detects shallow earthquakes near volcanoes. These could be early signs of unrest and often precede eruptions.
I-felt-an earthquake