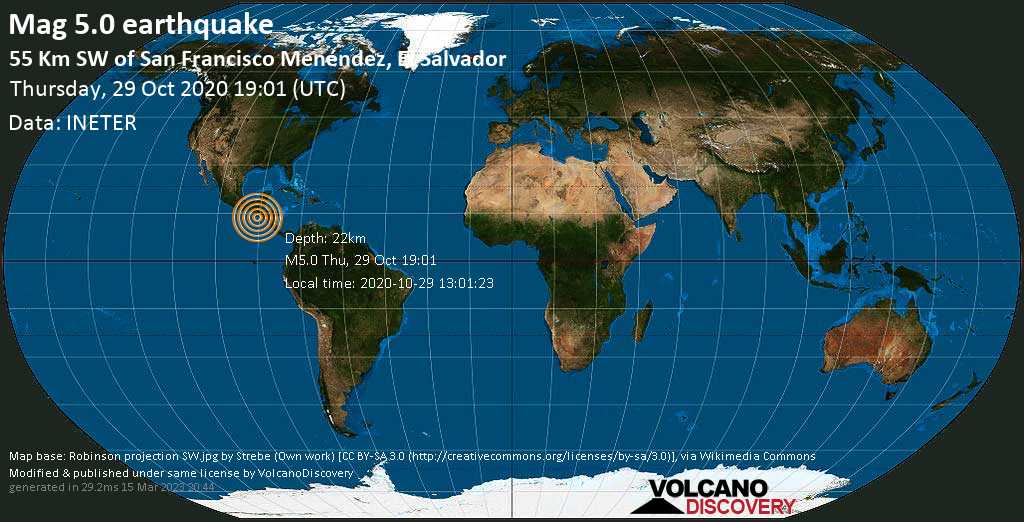 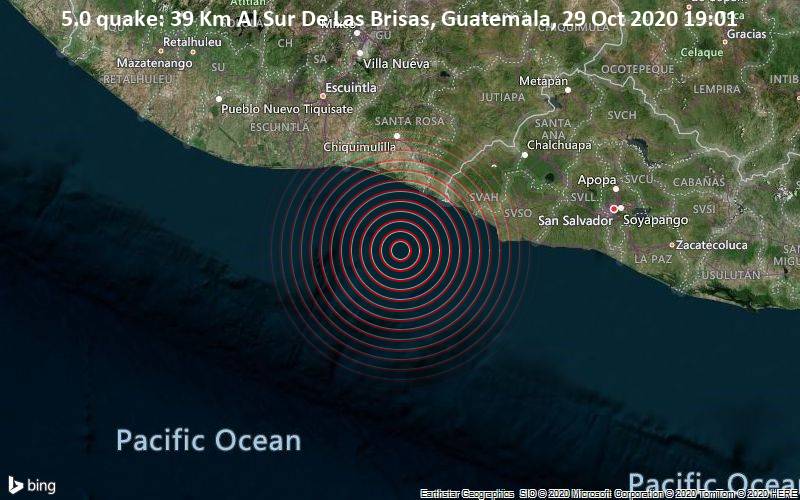 5.0 quake: 39 Km Al Sur De Las Brisas, Guatemala, 29 Oct 2020 19:01
Guatemala was shaken near the town of Acajutla by an earthquake of magnitude 5.0 56 minutes ago, the Nicaraguan Institute of Territorial Studies (INETER) reported. The quake hit at a shallow depth of 22 km beneath the epicenter around noon on Thursday 29 October 2020 at 1.01 pm local time. Magnitude and other quake parameters can still change in the coming hours as the agency continues to process seismic data.
A second report was later issued by the European-Mediterranean Seismological Centre (EMSC) agency, which listed it as a magnitude 5.0 earthquake as well. A third agency, the German Research Centre for Geosciences in Potsdam (GFZ), reported the same quake at magnitude 4.7.
Based on the preliminary seismic data, the quake should have been widely felt by almost everyone in the area of the epicenter. It might have caused light to moderate damage.
Towns or cities near the epicenter that are likely to be affected include Acajutla (pop. 22,800) at a distance of 60 km with light shaking, Iztapa (pop. 4,000) at a distance of 62 km with light shaking, Santa Ana (pop. 176,700) at a distance of 104 km with weak shaking, and Villa Nueva (pop. 406,800) at a distance of 119 km with weak shaking.
This story will be updated soon by VolcanoDiscovery. If you’re in the area, please send us your experience through our reporting mechanism. This will help us provide more first-hand updates to anyone around the globe who wants to know more about this quake.
Download the Volcanoes & Earthquakes app to get one of the fastest seismic alerts online:
Android | IOS

Vote for your favorite or submit photos
Gorely

Gorely volcano photos: Gorely is a young and very active shield volcano in southern Kamchatka. It is one of Kamchatka's easiest volcanoes to climb and offers stunning views into vast craters and the surrounding landscape.
Ibu

Ibu volcano photos: Ibu in Halmahera is one of the most active, but rarely visited volcanoes in Indonesia. A spectacular lava dome is growing inside the volcano's breached crater, with frequent explosions.
Stromboli