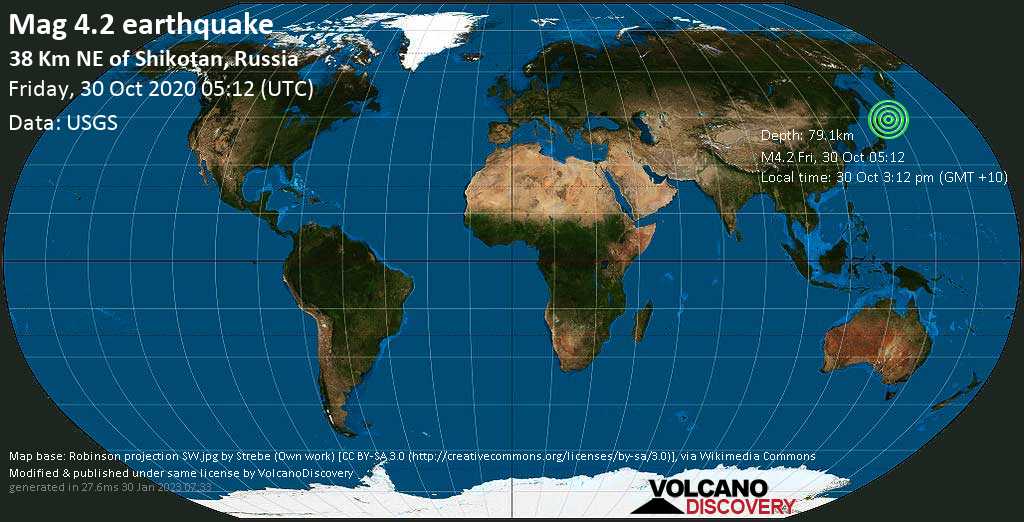 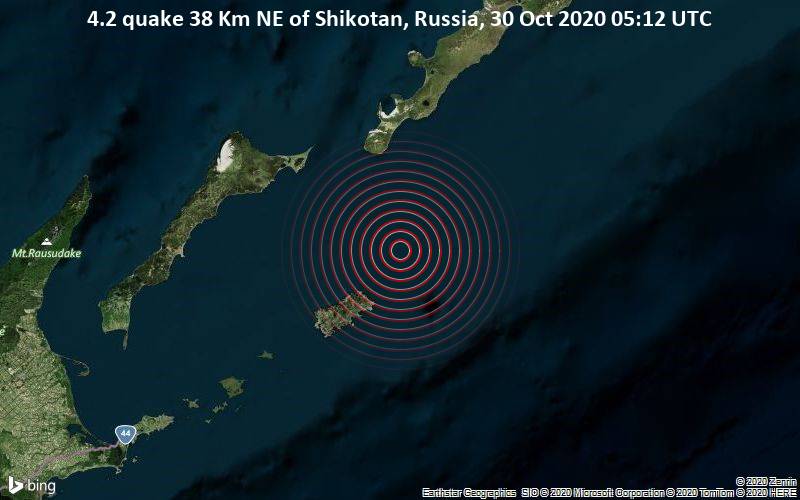 4.2 quake 38 Km NE of Shikotan, Russia, 30 Oct 2020 05:12 UTC
An earthquake of magnitude 4.2 occurred only 30 minutes ago 96 km east of Yuzhno-Kurilsk, Russia, the United States Geological Survey (USGS) reported. The quake hit at an intermediate depth of 79 km beneath the epicenter early afternoon on Friday 30 October 2020 at 3.12 pm local time. The magnitude, exact epicenter location and depth of the quake are likely to be revised within the next few hours as seismologists review data and refine their calculations, or as other agencies issue their report.
A second report was later issued by the European-Mediterranean Seismological Centre (EMSC) agency, which listed it as a magnitude 4.2 earthquake as well.
Towns or cities near the epicenter where the quake might have been felt, based on preliminary calculations, include Shikotan (pop. 2,100) at a distance of 39 km with very weak shaking, and Yuzhno-Kurilsk (pop. 6,500) at a distance of 96 km with very weak shaking.
Download the Volcanoes & Earthquakes app to get one of the fastest seismic alerts online:
Android | IOS

Current activity of Bardarbunga volcano, Iceland: An intense seismic crisis started at Bárdarbunga volcano on 16 August 2014 and is continuing at the time of writing (23 Aug). It may or may not lead to a volcanic eruption, possibly under the Vatnajökull ice cap.
Follow updates as news come in!
Quakes Felt

Earthquakes near Volcanoes: Our world-wide map continuously detects shallow earthquakes near volcanoes. These could be early signs of unrest and often precede eruptions.
Fuego