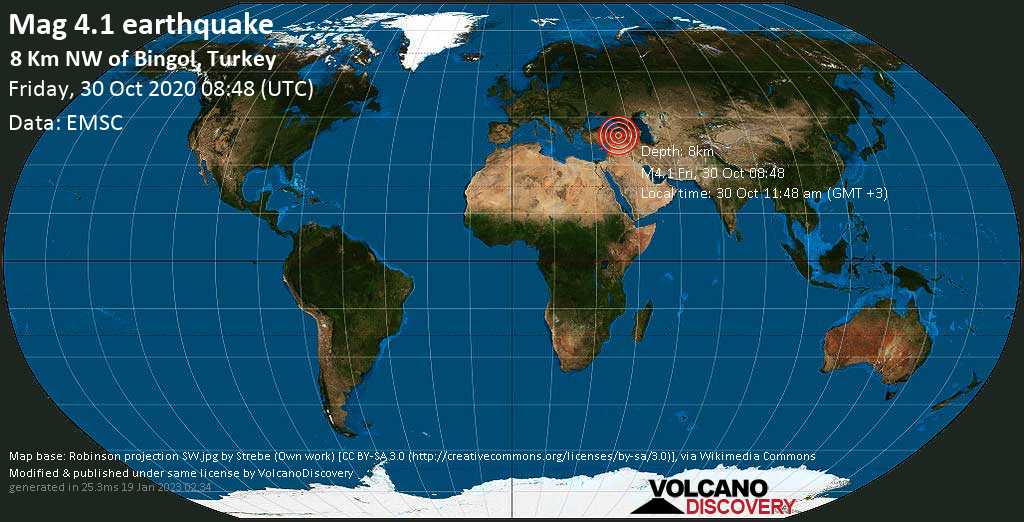 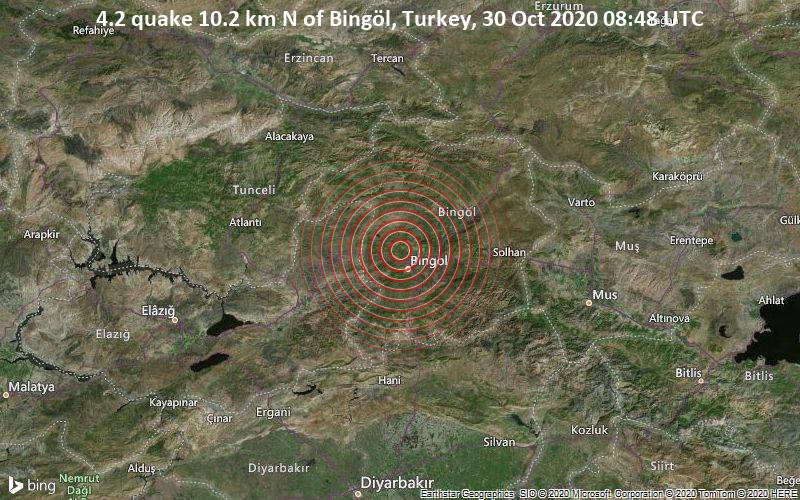 4.2 quake 10.2 km N of Bingöl, Turkey, 30 Oct 2020 08:48 UTC
A magnitude 4.2 earthquake was reported only 6 minutes ago by the European-Mediterranean Seismological Centre (EMSC), considered one of the key international agencies that monitor seismic activity worldwide. The earthquake occurred at a very shallow depth of 2 km beneath the epicenter in the morning on Friday 30 October 2020 at 11.48 am local time. The magnitude, exact epicenter location and depth of the quake are likely to be revised within the next few hours as seismologists review data and refine their calculations, or as other agencies issue their report.
Our monitoring service at VolcanoDiscovery identified a second report from the Kandilli Oservatory and Earthquake Research Institute in Istanbul (KOERI-RETMC) which listed the quake at magnitude 4.0.
Based on the preliminary seismic data, the quake was probably felt by many people in the area of the epicenter. It should not have caused significant damage, other than objects falling from shelves, broken windows etc.
Towns or cities near the epicenter where the quake might have been felt, based on preliminary calculations, include Bingöl (pop. 80,600) at a distance of 10 km with light shaking, Genç (pop. 22,500) at a distance of 26 km with weak shaking, Karakoçan (pop. 29,700) at a distance of 37 km with weak shaking, and Muş (pop. 82,500) at a distance of 93 km with very weak shaking.
Download the Volcanoes & Earthquakes app to get one of the fastest seismic alerts online:
Android | IOS

Volcanic crisis at Sakurajima - updates: A strong earthquake swarm and increased inflation were detected in August 2015 and triggered authorities to raise the alert level, as volcanologists think that a larger eruption could follow. News and updates on the events can be found on this page.
Volcano Tours