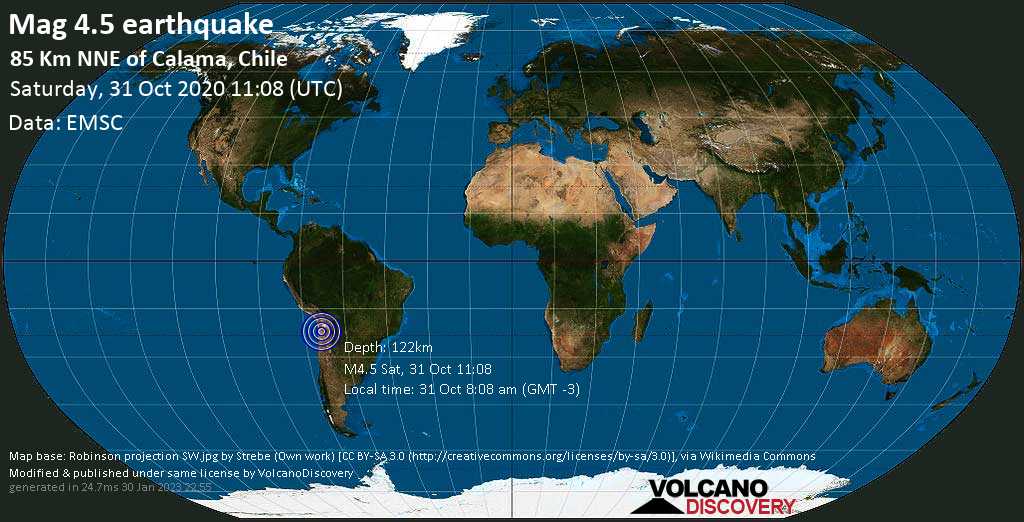 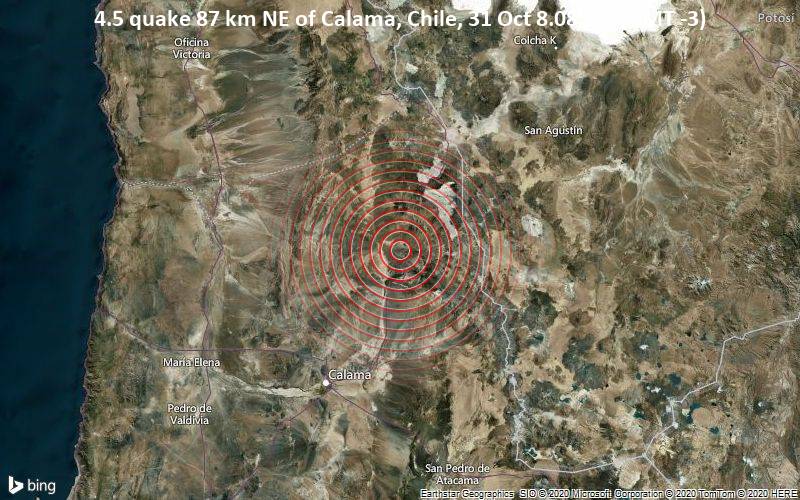 4.5 quake 87 km NE of Calama, Chile, 31 Oct 8.08 am (GMT -3)
An earthquake of magnitude 4.5 occurred in the morning on Saturday 31 October 2020 at 8.08 am local time near the city of Calama, Chile, as reported by the European-Mediterranean Seismological Centre (EMSC).
According to preliminary data, the quake was located at a relatively great depth of 122 km. The strength of the earthquake may have been tempered by its relative great depth below the surface, which makes it feel weaker in absolute terms. The magnitude, exact epicenter location and depth of the quake are likely to be revised within the next few hours as seismologists review data and refine their calculations, or as other agencies issue their report.
Our monitoring service at VolcanoDiscovery identified a second report from the United States Geological Survey (USGS) which listed the quake at magnitude 4.5 as well. A third agency, the National Seismological Center of the University of Chile, reported the same quake at magnitude 4.1.
Towns or cities near the epicenter where the quake might have been felt, based on preliminary calculations, include Calama (pop. 143,100) at a distance of 87 km with very weak shaking.
This story will be updated soon by VolcanoDiscovery. If you’re in the area, please send us your experience through our reporting mechanism. This will help us provide more first-hand updates to anyone around the globe who wants to know more about this quake.
Download the Volcanoes & Earthquakes app to get one of the fastest seismic alerts online:
Android | IOS

User reports estimate the perceived ground shaking intensity according to the MMI (Modified Mercalli Intensity) scale.
Contribute:
Leave a comment if you find a particular report interesting or want to add to it.
Flag as inappropriate.
Mark as helpful or interesting.
Send your own user report!
Arica (407.7 km NNW of epicenter) [Map] / Very weak shaking (MMI II) / rattling, vibrating / 15-20 s : Well,i just wait till the earthquake stops and thats all
Try our free app!

Definition of a volcano: A volcano is the term for any place on the surface of the earth, where hot molten rock (magma) reaches the surface.
Hawai'i

Volcano Tours on Hawai'i: The Hawaiian Islands are not only home to the most active volcanoes in the world, Kilauea and Mauna Loa on the Big Island, but also boast a unique natural environment. Born by volcanic activity of a very active hot spot in the middle of the Pacific Plate, they are a showcase of natural history.
Raung

Raung volcano photos: One of the largest and most active volcanoes in East Java, rarely-visited and relatively unknown Raung became (in)famous during its recent eruption in 2015 when its frequent ash plumes forced the repeated closure of Bali's airport.
Armenia